Like the clothes she designs, the owner of Vermont-based business Salaam cuts a strong figure 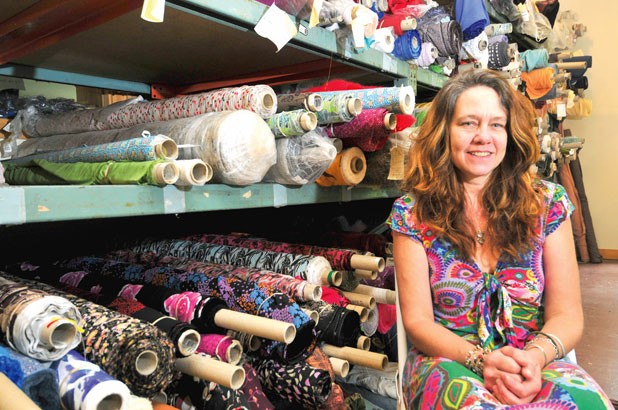 Andrea Miksic tends to make business decisions with her gut. The Vermont clothing designer has never been overly concerned with trends or retail flights of fancy; she goes with what feels right. Occasionally, this has been to her detriment. But more often, following her instinct has served Miksic well — over the past 21 years, her clothing business, Salaam, has developed a near-cult following.

That’s largely because Miksic knows what women want. Particularly, what women not inclined to shop at Hollister or Forever 21 are looking for in clothes. They want them to be flattering and comfortable, but cute and versatile enough to be worn for work or play.

“I like to make clothes that are sexy but fit normal bodies,” Miksic says.

Accordingly, Salaam’s devotees are many. One of them is Jill Leona, an art teacher at Barre City Elementary and Middle School. Leona, 45, raves about Salaam’s clothing with the enthusiasm of a religious disciple. Her wardrobe for the last 10 years has been almost exclusively composed of Salaam pieces, which she calls “high style, low maintenance.”

“I’m a real believer that, when you feel like you look good, you look good,” Leona says. “And for me, Salaam can give me that feeling that I’m pulled together, enjoying my life and expressng myself.”

Because of Miksic’s commitment to making vibrant clothes for Everywoman, her Plainfield operation has weathered the vagaries of a shifting apparel market. Despite some hiccups along the way, she’s been able to guide Salaam through a tricky economy while remaining true to her original vision. But she’s had to get out of her own way to do it.

Miksic is a slender 49-year-old with icy blue eyes often ringed by red, half-frame glasses. Her appearance is not necessarily what you’d expect from a successful businesswoman. On the day we meet, her long brown hair is still wet from her morning shower, and she shuffles sleepily around Salaam’s offices in red Birkenstock sandals. She takes long drags on a self-rolled cigarette as she tells how she got into the clothing business more than two decades ago.

As Miksic talks, her flowing Salaam swing jacket often slips from her shoulder, requiring her to hike it back up. With all her rings, jangling bangles and bohemian dishevelment, she’s almost the female equivalent of Keith Richards, minus the kohl-lined eyes and gravelly British accent. All the same, she looks put together, which is perhaps a testament to her clothing’s ability to transform.

Miksic grew up in Queens, graduated from the prestigious Bronx High School of Science and enrolled at the University of Vermont. But her college career lasted only a year before she packed off to Colorado to become a ski bum. Out West, Miksic became pregnant, acquired a sewing machine and began making clothes for herself.

A few years later she returned to Vermont and got a job at Wild Oats, a natural-fiber clothing company based in Burlington. In 1983, Miksic bought the business and built it into a successful maternity-wear company, selling wholesale to large department stores such as Macy’s.

Five years later, Wild Oats was sold to a Canadian company, and Miksic was on her own. Inspired by her studies of African dance and other forms of movement, she began making tie-dye and batik clothes for dancers, which she sold at craft shows. Her designs, made from woven rayon, were what she calls “one size fits many.” She illustrates this in her office by pulling on an old sample skirt to show how far it stretches.

In 1988, Miksic and her partner, Peter Burns, purchased the old creamery in Plainfield and the former Pentecostal church next to it. On the church altar, Miksic built a stage for dancing. Today, the stage serves a different function: It holds stacks of metal shelving, heavy with bolt on bolt of bright, patterned fabric. The church serves as Salaam’s headquarters.

Salaam, which means “peace” in Arabic, began in earnest in 1990 after Miksic and Burns returned from a trip to Africa. The couple created the designs and hired a team of home sewers to assemble the pieces. Soon they had wholesale accounts all over the country.

Today, the company no longer employs home sewers, owing to the complications of state labor regulations. Nor do workers cut any fabric at the Plainfield studio. But the clothes are still made in the U.S. — these days, all the manufacturing happens in New York City.

Salaam’s line of clothing is fairly basic: tank dresses, wrap shirts, tube skirts, all with simple, flattering silhouettes. The pieces, which bear names such as Flippy, Flappy and Cutie, can be dressed up or down. Some of the designs veer into hippie territory, but that’s Miksic’s provenance.

The company’s stock-in-trade is its patterns, which Miksic takes great pride in selecting. Years ago, the renowned textile mills of Germany and France provided all Salaam’s fabrics. They looked exotic and gave Salaam’s clothes an aura of worldliness. But many of those mills have since closed or been consolidated, and finding eye-catching patterns on quality fabric has been tough. Still, it’s what customers clamor for.

“When people like one style, they want to see it in a million patterns,” Miksic explains.

“Picking fabrics is what she’s really great at,” says Lorre Tucker, owner of Expressions boutique on Church Street in Burlington. Tucker was one of Salaam’s first wholesale customers and carried Miksic’s designs until the Salaam retail store opened in Burlington two years ago. “What I was always attracted to was Andrea’s sense of color,” Tucker adds. “Picking patterns is like an art.”

But, unfortunately for Miksic, the apparel business isn’t only about having a good eye. Her unconventional business style — using intuition and winging it — and her tendency toward disorganization have presented challenges over the years, as has the changing economy. Salaam’s profit margins have fluctuated wildly, and its retail outlets in Montpelier and Burlington have been difficult to maintain, she says.

In fact, Miksic is considering selling the Burlington store to her employees and is entertaining the idea of closing the Men’s Store, one of her two Montpelier retail locations. Still, she takes a lighthearted view of her business: “I love being creative and making things happen, but I suck at the rest.”

Miksic may not be the most savvy or traditional of entrepreneurs, but she succeeds in spite of herself. Salaam does about $1.25 million in sales annually, though Miksic says none of that is profit. More than 500 boutiques around the country carry Salaam’s clothing, and the brand’s customers remain loyal. “It is the greatest clothing I’ve ever worn, without a doubt,” says Jill Leona.

For Miksic, going with her gut may not be the worst way to do business.