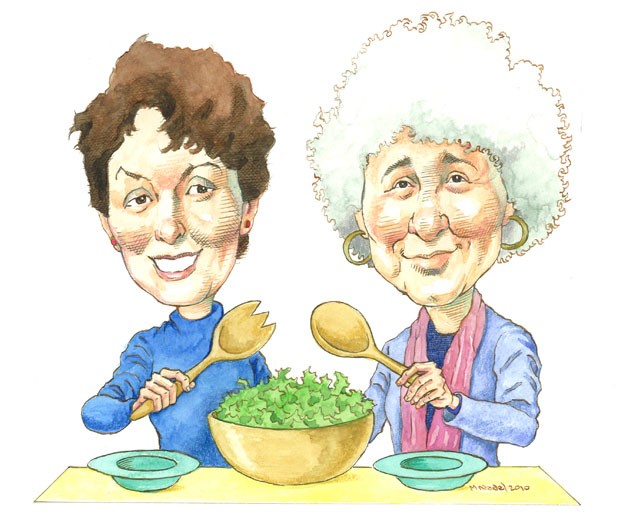 The guests couldn’t get enough of Anne Obelnicki’s home-cured, 2-year-old prosciutto. Served on crusty Patchwork Farm bread with a brunoise of cranberry, fennel and shallots, the thinly sliced pork was melt-in-the-mouth tender and richly saline.

The appetizer wasn’t standard dinner-party fare, but this wasn’t a standard dinner party. Hosted by famed food writer Marian Burros at her house in Craftsbury, it had guests such as New York University professor Marion Nestle — author of Food Politics and other notable volumes — and her partner, Cornell emeritus professor Malden Nesheim, plus a cadre of staffers and students from Sterling College, where Burros just became a trustee.

The dinner, prepared by three Sterling undergraduates under the direction of Obelnicki — the school’s recently hired director of sustainable-food systems — capped a full day of college-centric activities. Earlier, Nestle had stopped by a class to give a lecture, and then the out-of-towners were treated to a campus tour, which included visits to the school’s draft horses and its new hoop house, where greens for the cafeteria will thrive all winter long.

After the ramble, some time was devoted to brainstorming about Sterling’s newest academic program. It’s a five-week summer intensive course geared to giving students a better understanding of how to “think and make decisions like farmers,” according to Sterling’s website. Attendees — who, administrators hope, will come from far and wide for the experience — will learn farming basics, make sausages with meat from animals they helped tend and visit local artisan food producers.

But the planning group — which includes Sterling president Will Wootton and dean of academics Pavel Cenkl in addition to Obelnicki — is still considering how to attract students and exactly what to do with them when they show up on the rural campus.

Should participants be responsible for preparing meals for the community? Obelnicki noted that, in just a few weeks, students wouldn’t have time to become culinary experts. Perhaps they could visit area restaurants with a commitment to local foods, Wootton suggested. But, besides Claire’s Restaurant & Bar in Hardwick, there are few such places nearby.

Then there’s the question of whether enough future ag experts will sign up for the intensive, which will be priced about the same as regular half-summer tuition. Nestle, who helped spearhead the NYU food studies program in 1996, seemed confident students would appear. She noted that her school received a flood of applicants the moment its program started, and that public interest in the academic study of food shows no signs of flagging.

Dinner was an apt demonstration of what Sterling students have already mastered. Much of the produce for the six courses came directly from the college’s fields, including all the main ingredients for an escarole salad with beets and warm bites of rabbit. The succulent braised lamb, served as an entrée with lentils, aromatics and oyster mushrooms, was raised on campus, too.

With so many foodies packed into Burros’ antique-decorated living room, the conversation naturally centered on all things edible, ranging from a rousing debate about the safety of raw milk to a discussion of food shopping in Montréal. There was plenty of wine to go around, and the meal lasted well into the evening.

After dessert, an apple torte with yogurt ice cream, the sated diners headed back to comfy chairs in the living room to nibble on local cheeses and truffles made by Obelnicki and the rest of her culinary crew. If the food in the Sterling cafeteria is as good as the dinner at Burros’, the school should have no problem convincing students to attend its new program, provided it can get them to the table.