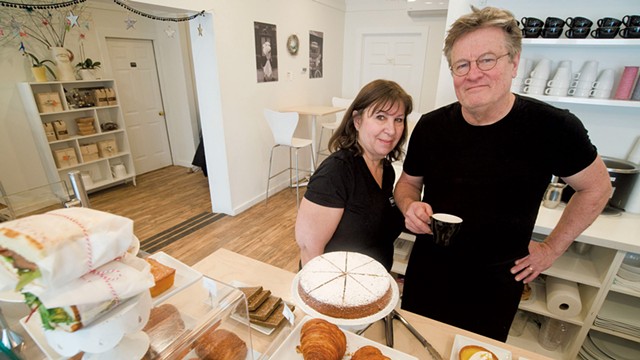 Bohemian Bakery sold its last flaky almond croissant at 78 Barre Street on June 27 before closing temporarily to move a few blocks to a new, larger space in the heart of Montpelier. Co-owner Annie Bakst said the bakery is tentatively scheduled to reopen in two adjoining storefronts at 81 and 83 Main Street on July 9 after a short break.

The new high-profile location at the corner of State and Main streets was most recently the Blue Stone but is best known as the decades-long home of Coffee Corner, a beloved diner. Bohemian will also take over the neighboring space, which was previously a real estate office.

"It's a beautiful location in the center of town," Bakst said. "We were ready to make a move."

Bakst and her husband, Robert Hunt, started baking wood-fired bread in 2003 at their East Calais home. In 2010, the couple began hosting pop-ups in their gardens with pastry and coffee brewed from house-roasted beans. Those events were so popular that they were encouraged — and practically obliged — to open their Montpelier bakery in 2017.

Since late April 2020, Bohemian has offered a limited menu of pastries and coffee with window service only. When the bakery reopens, seating will again be available — and there will be more of it. Like the former location, however, this one will have no table service. "It's not a restaurant; it's still a bakery," Bakst said.

The menu will gradually expand to include a larger pastry case and a full array of Bohemian's pre-pandemic offerings, such as quiches, salads and prewrapped sandwiches. "We are also hoping to make some breads again," Bakst said, "though not sourdough and not right away."