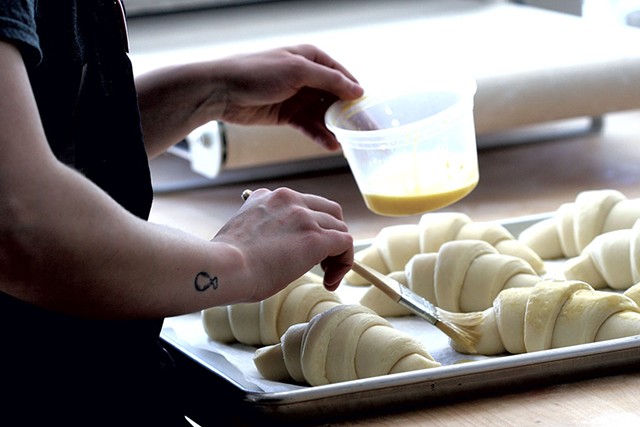 Under an elderberry tree, a couple sat at a small, round metal table darkened with patina. He untied a piece of twine from his paper-wrapped salmon-salad sandwich and knotted it tenderly around her wrist, where it would stay until time and sweat wore it away.

Nearby, novelist Howard Norman, hands waving to punctuate his points, was talking to cartoonist Ed Koren over cappuccinos and a custard-filled Danish. The door to the bakery — a small, yellow outbuilding across the driveway from an 1835 farmhouse — was closed to keep in the air conditioning, but the line of hungry people snaked across the lawn, dozens deep.

This scene, and many like it, occurred at Bohemian Bakery in its original incarnation as a Sunday-only pop-up at the East Calais home of Annie Bakst and Robert Hunt. Beginning in December 2010 — with a schedule dictated by the vagaries of weather and the owners' stamina — the pair and their helpers cooked and served traditionally made, European-style pastries and a small selection of coffee concoctions for just four hours a week.

Visitors bought the goods, settled on the lawn and, in warm weather, often had to be reminded to leave at the end of the day. It was glorious and fun — and, for the couple, overwhelming. "You can only serve so many people before the system starts to break down," says Hunt. "Every single Sunday, after three days of grinding work, I'd fall on the couch, and I'd say to Annie, 'I'm never going to do this again.'" The following Sunday, they'd do it again.

In autumn of 2016, those summer Sundays ended abruptly — because the pair was working behind the scenes to bring their treats to a new audience. In early February, Bakst and Hunt opened a café at 78 Barre Street in Montpelier. Bright and airy and open five days a week, it gives more locals access to the flaky, buttery, fruity, creamy treats that Hunt and his pastry chefs make with virtuosity.

On a busy Friday in the sun-streaked bakery, Chelsea Brochu and Neillea Dee are shaping croissants. Hunt joins them to laminate some dough, deftly dimpling it with his fingers before folding it over a pound of chilled butter that has been beaten flat with a rolling pin.

He's been in the business since 1973, when he took a job as a "clean-up boy" at a California bakery. A few years later, the English major got a gig as a baker's apprentice in Fresno. "I showed up at four in the morning, and no one else showed up, so I got the job," he recalls.

Over the years, Hunt learned to bake bread and roast coffee, and he gradually perfected his pastries. "As a journeyman, you go on a journey and learn from a lot of different people," he says. "My journeyman period lasted for 30 years."

In that time, he learned to make Danishes from a Dane and worked with bakers from Italy, France and Germany. In 2003, the couple moved to Vermont, converted a garage into a bakery and, for more than a decade, supplied local co-ops with loaves from their wood-fired oven — until the demands of their Sunday pop-up led them to make pastry the priority.

Hunt's hard-won expertise shows in his wares. "So many bakeries use just one or two doughs [for all of their products]," says Bakst a little tartly. "We use the appropriate dough for the appropriate pastry."

Bakst and Hunt are nothing if not opinionated. When they're working the counter — Hunt making espresso from house-roasted beans and Bakst selling the sweets — their cheery irascibility is fun for some and shocking to others.

"It took me until very recently to embrace my inner curmudgeon," Hunt says, flashing an impish grin. "I'm getting grumpier as I get older, and I don't have a lot of time to waste on frivolities, so I can come off as being kind of short." He admits that it took him decades to realize he's actually an introvert. For her part, Bakst can be as sweet or as acerbic as a lemon tart.

Customers are wont to get an earful if they try to get a macchiato with a splash of hazelnut syrup, or a cappuccino with anything but whole cow's milk. Hunt's objection to such things is partly aesthetic: "I think soy milk and rice milk taste terrible, and I don't want my coffee wrecked with that," he explains. In his view, a mocha isn't a coffee drink; it's a "hot milkshake with whipped cream on top."

Hunt's opposition is also practical: When a barista has to concoct only a few different drinks, it streamlines the work. "Choice has created an environment in which you're so busy ... behind the bar that it slows service down," he says. "I want people to have more time to enjoy themselves and [spend] less time waiting for a beverage."

Something similar goes for the pastries. Although a handful of Bohemian's offerings are naturally gluten-free, the bakers don't make an effort to provide such options. "We kind of rehearse some of [these explanations], because we know we're going to get blowback," says Bakst. How do they explain the choice to embrace gluten and dairy to the exclusion of certain customers? "We have a fine selection of pastries that are made the authentic way. Tried and true," Bakst goes on. "You mess with that, and you lose something in translation."

Beyond their gruff exteriors, both Bakst and Hunt display genuine passion for their products and their community, and a joy in serving both. Hunt in particular is willing to meet his customers with thoughtful frankness. Sitting at a round table between the bakery's office and its kitchen, exhausted from the rigors of opening week, he talks to a reporter about grief and guilt as well as gluten, although much of the personal stuff is off the record.

But one thing the couple wants on the record is their abiding affection for each other. "I wouldn't be the person that I am without her," Hunt says of Bakst, whom he met in the San Francisco Bay Area in 1996. "I never would have dreamed something like this would come together. It's her; it's us; it's the heart of the story."

Less lyrical and more practical, Bakst likes to talk about milestones in her partner's culinary training, praising his abilities and dropping the names of the Bay Area bakeries to which he was connected.

The new café's schedule gives the couple a chance to pass along what they've learned to a rising generation of bakers. "They are doing phenomenally well," Hunt says of bakers Brochu and Dee. "They're such a gift." He's still steering the boat, teaching them the minute subtleties that separate a nice pastry from an exceptional one. 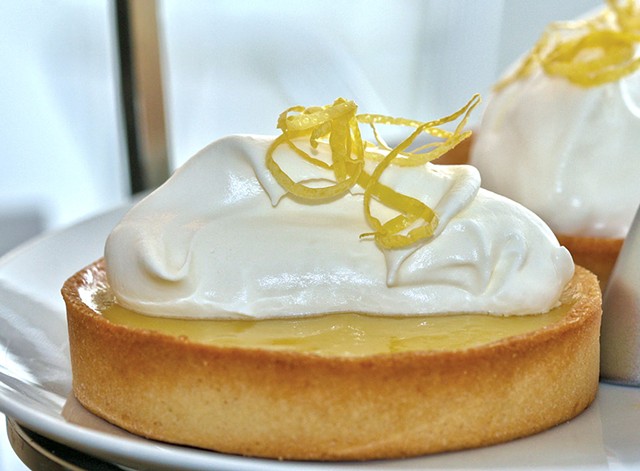 For instance, "The key to making a good croissant is not the kind of flour or the kind of butter," Hunt says. "It has to do with fermentation more than anything else. It has a distinctive smell if done right. I train my staff to always be sniffing the starter. It's not any kind of magic trick. When it comes to baking, nothing informs you more than your sense of smell."

When things go wrong, the results go in the trash. "We're not going to try to salvage them and put them out to make money," Hunt says. "I set the bar, and I never deviate from it."

Which is why the goods that land on the counter are, without exception, fantastic. Take the kouign-amann, a Breton pastry made of dough folded around layers of butter and sugar, which turn to glassy caramel in the oven. Or the fruit tart — a short crust layered with pastry cream and almond cream, topped with strawberries, blueberries and almonds.

Customer Nick Ward, who dropped by the bakery on a busy Friday morning, noted that the spot has an almost magnetic effect. When he drives down Barre Street, he says, "I can't not come in. It's like my car stops itself."

Those who made the pilgrimage to Calais for Bohemian Bakery's Sundays will always remember the pleasure of biting into a piece of late-summer tomato tart while watching wild ducks land on Bakst and Hunt's pond. While such experiences may be irreplaceable, at the new café, they'll see all of their favorite treats: apple squares, quiche Lorraine, lemon-curd tarts, and moist almond cake with a layer of raspberry jam and chocolate ganache frosting. The selection, says Bakst, includes "the standards we've made since day one, and a couple of things to freshen it up for people who come every day." In Hunt's words, "The menu is an amalgam, a mélange, a smorgasbord of all the stuff I've learned."

And Sunday mornings are likely to bring the usual patrons — writers and chefs and people who simply love good food and well-brewed espresso — to squint in the light slanting through the café windows, talk about poetry, draw in sketchbooks, and fall in and out of love.

The original print version of this article was headlined "Bohemian Rhapsody"