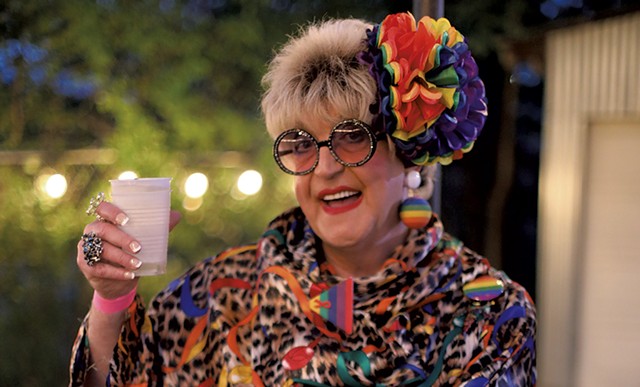 A couple of weeks into lockdown back in 2020, Bob Bolyard decided to take his longtime character, Amber LeMay, to the wide world of livestreaming. A founding member of the House of LeMay, a long-standing Vermont drag troupe, Bolyard said to himself, "What the hell. I've seen other people do stuff online. I've got a computer, I've got a camera — I can do that." And a new era for the House of LeMay was born.

Traditionally, the group was something to be experienced live. Its musical comedy shows, often holiday-themed, included songs and sketches showcasing the antics of three sisters living in the Hot Dam Trailer Park in the fictional Vermont town of Beaver Pond.

"I'm your favorite aunt or drunk neighbor — or your drunk aunt or favorite neighbor." Bob Bolyard tweet this

Pre-pandemic, they were ladies about town, too, often seen holding court at social events and festivals. The LeMays also host the annual Winter Is a Drag Ball at South Burlington nightclub Higher Ground. Originally scheduled for February, this year's ball was moved to May 14 due to COVID-19.

Seven Days caught up with Bolyard via video chat.

SEVEN DAYS: How does "Amber Live!" continue the legacy of the House of LeMay?

BOB BOLYARD: Well, I mention Beaver Pond a lot. That's our hometown. And we have commercials we've done with the Beaver Pond players. And I have Lucy Belle come in and do her "Bitchin' in the Kitchen With Lucy Belle." And so I think it just brings more attention to our legacy.

SD: Assuming that the pandemic ends at some point, do you ever see taking "Amber Live!" truly live, like with an audience?

BB: I have thought of that. But the logistics, you know — right now it's very easy for me to just take my laptop down to my basement, only dressed from the waist up.

SD: I was going to ask about that! Have you ever repeated an outfit?

SD: Who are Amber's style icons?

BB: I don't have style icons. I always say, "I'm your favorite aunt or drunk neighbor — or your drunk aunt or favorite neighbor. I'm a suburban, fun woman."

SD: Where do you get a lot of Amber's looks?

SD: That's not a Russian brand, is it?

SD: If you could resurrect anyone from the dead, whose zombified remains would you want to bring on your show to interview?

BB: I think Johnny Carson, because I always enjoyed his interviews. And I'd like to find out some of his — not secrets, but how did he approach an interview. I always found him entertaining.

SD: You've certainly had a slew of interesting guests. I mean, Carole Baskin alone. Like your show itself, she's forever tied to the pandemic, given that "Tiger King" came out about a week into lockdown.

BB: That was my first major get.

SD: I love how you both wore animal prints. She always does, right? That's kind of her thing?

BB: Yup. I said, "I'm gonna look like her." She appreciated that.

SD: Charles Busch is another guest who stood out to me. Psycho Beach Party, which he wrote and starred in, is one of my favorite movies.

BB: I tell you, he couldn't have been more gracious. He spent two hours with us on a Saturday afternoon. He's covered so many different aspects of entertainment and gay life and history. He talked about not fitting in, doing his own thing.

SD: What other guests have excited you?

BB: I'm very happy with the political guests that I've had on the show.

BB: Oh, my God. He was interesting. Very easy to talk to. Some of the first I had were former [Vermont] lieutenant governor David Zuckerman, and [Vermont] state Reps. Brian Cina and Taylor Small. Also, John Fetterman, lieutenant governor of Pennsylvania. On his balcony [at his Harrisburg, Pa., capitol grounds office], he has the rainbow flag and the marijuana flag. He's not allowed to have any flags flying from his balcony. So the cops or whoever comes up and takes them down — and he puts a bigger one up.

BB: I think it's gonna be wacko. It's the same weekend as Saint Michael's and Champlain College's graduation, and Waking Windows. So the town's just going to be busting that weekend. I know people from New York City, Connecticut, Poughkeepsie and Albany already have their rooms reserved. So if there's that much interest outside Vermont, it's going to be a pretty crazy day.

This conversation was edited and condensed for clarity and length.