When voters in the Essex Westford School District go to the polls on April 12, they'll select three school board members from a crowded slate of candidates who view teaching about equity in very different ways.

The role of schools in promoting equity and inclusion has emerged as a defining issue, with candidates expressing distinctly different views.

Essex Becomes a Battlefield in the Public School Culture Wars
By Derek Brouwer and Alison Novak
Education
The divide is unsurprising given national conversations regarding teaching about race and gender identity in schools. In June, the Essex Westford school board passed a wide-ranging equity policy that mobilized community members to speak out both for and against it. The policy is premised on the concept that systemic inequities exist within our country, and delineates the district's responsibility to recognize and redress the impact of racism.

That includes incorporating anti-racist and LGBTQ-affirming education in curriculum; training teachers and staff around bias, stereotypes, and equity; and recognizing and honoring diversity. Liz Cady — a board member who has spoken at anti-critical race theory forums — cast the sole vote against the the equity policy.

Essex Westford School District’s Proposed Equity Policy Prompts Heated Debate
By Alison Novak
Education
Bombardier, Carpenter, Taylor and Verasamy have all expressed their support for the equity policy, while Barber, Drury and Coleman take issue with parts of it.

Taylor said the polarizing community debate around the policy was one of the reasons she decided to run for school board.

"The equity policy is about taking down barriers and offering a safe place for students where they are accepted for who they are," Taylor said in a candidate forum sponsored by Rights and Democracy Vermont. It's important for students to see themselves reflected in school celebrations such as National Coming Out Day, as well as books and other learning materials, she added.


Verasamy, a meteorologist at the U.S. National Weather Service and an Air Force veteran who has campaigned alongside Taylor, also said he wholeheartedly supports the policy.

Carpenter — a parent who was appointed to the school board in November to fill a vacant seat — also spoke in support of the equity policy at the forum. In response to a question about how the school district should support transgender and non-binary students, Carpenter, a former teacher who now oversees nonprofit boards across the country, said it's his job to listen to students and learn about what makes them feel safe. The equity policy is in place to make sure all students have equal access to education, he said.

Bombardier, an incumbent who has served on local school boards for 20 years, cast his vote in support of the equity policy in June. In an interview, he said he welcomed the debate over the policy because it has shed light on issues such as institutional racism.  Bombardier also said he's concerned about the gap in test scores between low-income students and students of color and their peers.

"No students should be having to encounter barriers that impede their academic and career potential," Bombardier said. 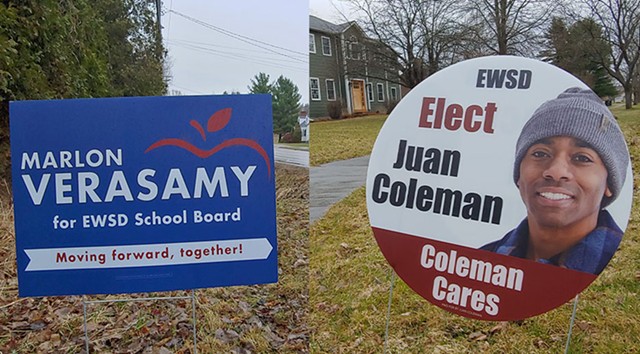 ✖i
Drury, Barber and Coleman have all campaigned on  boosting students' standardized test scores, asserting that academics should be the main focus of schools.

Drury, a Vermont Air National Guard veteran who works in weatherization, wrote in an email to Seven Days that in recent years, the school system "seems less focused on instruction and fixates on a social services role to become a strong influence in students’ lives, supplanting parents."

He said that parents and retired teachers have approached him with concerns regarding age-appropriate curriculum relating to sex education. He believes that there should be a rating system in school libraries to help ensure certain graphic or mature books are only available to young adults.

Coleman, a flight chief for the Vermont Air National Guard, wrote on his campaign website that as a Black man, he's experienced racism firsthand, but he is concerned that "in an effort to eliminate inequities, more divisiveness can be caused."

In an email to Seven Days, Coleman said one of his major issues with the equity policy is he doesn't know how the community will know if it is effective. Parents should also be better informed about the content of the policy and the teaching methods that will be used to advance it, he wrote.

Barber, an engineer and Marine Corps veteran, said though he's faced prejudice as a Japanese-American, he believes politically divisive issues should not be discussed in school.

"I just don't want to see our school become a political entity in any way, shape or form," Barber said at the Rights and Democracy forum

In an email to Seven Days, Barber said he believes that the district's equity policy includes several goals "that are a gateway to [Critical Race Theory]-informed ideas," some of which he thinks shouldn't be addressed in schools.

"I do not want our children to be taught they should feel guilty for being a certain color, " Barber wrote. "Nor do I want to see children being taught they are a victim because of the color of their skin."

"Everybody should achieve greatness and we shouldn't limit them or hold them. back because of past generations' atrocities," Barber added in a phone interview.


But both Taylor and Verasamy said it's important to support students beyond just academics. Due to the pandemic and other factors, students are struggling, Verasamy said. "We can't just say, 'Hey, do the work. Do the reading, writing and arithmetic.' There's more to it than that."

And Taylor said  students need to feel a sense of belonging in order to excel.

"As a teacher, I can tell you that kids won't learn and kids won't perform academically if they don't feel safe," she said at a March 27 candidate forum organized by Essex High School's Social Justice Union.

At the event, Verasamy and Taylor both expressed their support for age-appropriate curriculum that is inclusive of different gender identities.


"We have students who identify as transgender, and it doesn't just magically happen at fifth or sixth grade," Taylor said. "For transgender students, it is really important that they see themselves accepted and represented in their community."


Barber, Drury and Coleman, meanwhile, said that young children should not be taught about gender identity and sexuality, and no marginalized group should be singled out for more attention than others. "A students' identity and gender, that's not as much a concern for me as whether or not they can read and write," Coleman said in response to a question about how candidates would support LGBTQ students. "That question, right there, should be about everybody. What are you going to do to support every student?"

Barber said he'd rather all students just be taught to be nice to everybody, instead of focusing on certain categories of students.

Despite their substantial differences in opinion, all candidates said they've felt respected by their competitors throughout the race.


"While we disagree on several avenues of approach, I think we all want Essex and Westford youth to have the best experience possible growing and learning in our district," Drury wrote in an email. "Irrespective of the election outcome, I hope we continue with solid, civil discussions on our future and the best ways to get there."