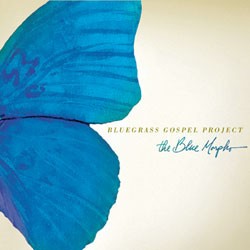 One of the most alluring creatures of the tropical rainforests in Central and South America is the blue morpho. The iridescent butterfly is known both for its striking beauty and for the abrupt color changes that mark its life cycle. As such, the animal is the perfect namesake for the fifth album from the Bluegrass Gospel Project, one of Vermont’s most talented acoustic bands.

Sonically, The Blue Morpho is composed of wildly diverse colors. And that’s echoed in the changing lineup of band members since the release of Makes You Strong in 2007. Gone are Vermont folk diva Patti Casey and gospel shouter Jim DiSabito. Recently added are local songbird Colby Crehan (PossumHaw) and bassist Kirk Lord. But the shifting personnel list hasn’t dampened the most vibrant aspect of BGP’s musical plumage: a choir of top-notch vocalists that can inspire joy-shivers when they get cooking.

And cook they do, serving up a varied menu throughout the disc, from Loretta Lynn to classic bluegrass gospel to U2. The band reprises an instrumental version of The Youngbloods’ “Darkness Darkness,” previously recorded by one of fiddler Gene White’s earlier bluegrass bands, Breakaway. They follow that up with an inside musical joke: a version of The Youngbloods’ hit song, “Get Together.”

Crehan struts her stuff on a gorgeous version of “Carved in Stone,” a song best known from a version by New Orleans rockers The Subdudes. She then locks musical arms with high-lonesome crooner Taylor Armerding on “Everybody Wants to Go to Heaven.”

Paul Miller reimagines Bill Withers’ “Lean on Me” as a pensive waltz, and follows that with the David Rawlings classic, “I Hear Them All,” with still more lovely vocal harmonies from Crehan. Just try to find a better group of singers.

The disc consists mostly of live performances recorded directly to digital. For a band centered around “high frequency” instruments — fiddle, dobro, mandolin, banjo and flatpicked acoustic guitar — the auditory result, particularly on the instrumental tracks, lacks warmth. However, the vocals shine through regardless of any technical limitations.

The Bluegrass Gospel Project are still going strong and The Blue Morpho proves it. Hear for yourself when they perform music from their new CD at the Grand Isle Lake House this Sunday, May 3, in a concert produced by Island Arts.