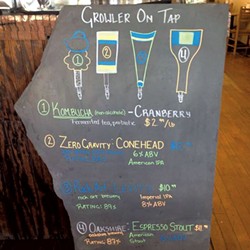 Skiers searching the Mad River Valley for creative pizza with local ingredients will soon be more than satisfied. Waterbury's the Blue Stone will open a second location in Waitsfield in December. "It's going to be a really aggressive push," co-owner Vinny Petrarca says of renovating the space in time for ski season. The historic building at 5351 Main Street most recently held Akes' Den.

Don't look for Petrarca and co-owner Chris Fish to reinvent the Stone. The two restaurants will share menus and staff, Petrarca says. Translation: more of the same for Waitsfield locals to love.

With the recent approval of its second-class liquor license, Barre's Morse Block Deli added beers-to-go to its roster last week.

Going forward, Smith hopes to focus on hard-to-find and specialty beers — he's already stocking Belgian sours such as Cuvée des Jacobins Rouge — and to feature small-batch drafts that can't be found in bottles or cans.