As Eusheen Goines quickly approached his 3 p.m. deadline, he was smoking on a pipe — not puffing it, but creating it.

The Evergreen, Colo.-based artist, known among professional glassblowers by his first name, stood at a two-foot jet of blue fire, rapidly working rods of raw glass into a stunning work of art. It was September 2015 at the Bern Gallery's Pipe Classic 10 — the Burlington smoke shop and glass school's annual pipe-making throw down — and, like all competitors, Eusheen had just 12 hours to complete a pipe that normally might take him days or even weeks.

Sporting a black T-shirt, a green wool cap, gloves and dark protective eyewear, Eusheen stood at the torch for nearly six hours without resting or eating, as several dozen spectators watched his every move. (Each year, the Bern Gallery documents the event on a video, where this reporter watched it, and also streams it live on YouTube.) From the corner of his mouth hung a flexible blow hose, which enabled him to occasionally puff air into the molten orange glass while simultaneously twisting, pulling and bending it into various shapes and sizes.

"How many minutes do I got?" Eusheen barked, at no one in particular.

With 50 seconds remaining, Eusheen gave a glowing orange globule one final dab with a steel tool, then lifted a kiln door and gently placed his finished piece inside. From the opposite side of a Plexiglas safety partition, the crowd erupted in cheers. Eusheen finished his pipe, which ultimately won first place, with just 30 seconds left on the clock.

When it was over, a tired but relieved-looking Eusheen shared a fist bump with Bern Gallery co-owner and Pipe Classic founder Tito Bern, then exclaimed, "That was crazy as fuck!"

The same could be said about the Pipe Classic itself. The national glassblowing flame-off, held each year at Bern Gallery in the third week of September, has a solid claim on being the first-ever glassblowing tournament in the country to celebrate the art of glass pipes, bongs and bubblers. Though copycat competitions have since arisen elsewhere, those who've attended Pipe Classic insist that this event is like no other for its sheer artistry, intensity, fairness and raucous partying.

This week, Eusheen, 37, is back in Burlington defending his title at Pipe Classic 11, which began on Monday, September 19, and runs through Saturday, September 24. The event, much of which is free and open to the public, attracts glassblowers, smoke-shop owners and collectors from around North America. Several hundred have paid for a judge's pass, which lets them vote on the winners and bid on finished pieces at this weekend's auction.

Though Bern Gallery hosts Pipe Classic, it doesn't pick the competitors. Instead, an independent, 11-member committee of industry professionals selects 12 pipe makers from the United States and Canada to go head-to-head.

Pipe Classic's four rules haven't changed since the first glass bowl-a-thon was held in 2006: Each piece must be made from scratch by an unassisted solo artist; it must be produced in the Bern Gallery; it must be completed within 12 hours — divided into two six-hour sessions held on consecutive days; and the finished piece must be a functional pipe or be attached to one.

Every year, the level of competition rises — as do the prices paid for the finished pieces. At Pipe Classic 1, the top pipe sold for a few thousand dollars. At Pipe Classic 6, the first-place winner netted more than $5,000; a year later it was $8,000. Eusheen's winning pipe last year, a complex contraption that bubbled and swirled water like a moonshine still, sold at auction for $14,500.

Despite the event's growing prestige, Pipe Classic has gone largely unheralded in the Queen City. "The weirdest thing about the Pipe Classic is that it's this huge national event where we have people coming from all over the country," says Bern. "But locally, it's like it's not even happening."

That's understandable, given the art form's history. Mainstream society long thought of glass-pipe making as an underground, even degenerate, endeavor. For years many states, including Vermont, considered glass pipes to be drug paraphernalia that were subject to seizure. Hence the absurd caveat that adorns every glass-pipe store: "For tobacco use only."

In recent years, however, as marijuana was decriminalized in Vermont and pot prohibition snuffed out in other states, pipe making has evolved beyond its utilitarian, weed-smoking roots — though cannabis consumption remains popular among Pipe Classic competitors and spectators alike. Today, some glass collectors wouldn't dream of stuffing a nug into an award-winning pipe. 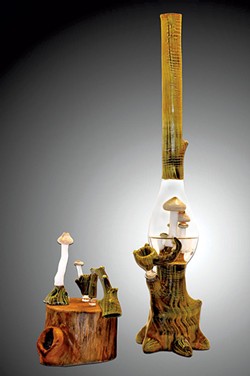 Pipe Classic was the brainchild of Bern, aka Adam Gross, who was born in Brazil and grew up in Ridgewood, N.J. Bern, who started blowing glass in 1999, sold them freelance on the road with his wife, Mikaela, before opening Bern Gallery with her in 2004. Long a fan of competitions, from poker tournaments to professional cook-offs, Bern soon envisioned one for glass-pipe makers, too.

Years ago, he explains, Bern and his glassblowing buddies would watch the cheesy '80s cult film North Shore, about an Arizona teen who travels to Hawaii to compete in the Pipe Classic surfing championship. Later, when Bern began to contemplate a name for his pipe-making contest — no such event existed previously — he remembers thinking, Hmm. Pipe Classic. How perfect.

Bern soon discovered that the domain names for the surfing event were available, as it had since been renamed the Billabong Pipe Pro. So he bought up all the domain names for Pipe Classic, then got on the phone and invited a dozen of the best glassblowers he knew. Pipe Classic 1, held in September 2006, featured mostly Vermont artists, though one competitor came from British Columbia.

"I wasn't 100 percent sure about the idea and didn't know whether it was going to work at all," Bern admits. However, among the Pipe Classic's first corporate sponsors was a torch manufacturer called Glass Torch Technologies, which offered $3,000 and $4,000 torches as prizes that year. "So, right off the bat, that got everyone's attention," he says.

Though glass flame-offs are now held in many other states, Pipe Classic attendees insist that the Burlington event is unique. First, because Bern Gallery has enough space for only three glassblowers to work simultaneously, the competition is held in heats. The first begins at 4 p.m. Monday and runs until 10 p.m., then resumes Tuesday at 9 a.m. and runs until 3 p.m. Once the first three pipes are completed, the second heat commences. This allows competitors to be spectators, too.

"I love to watch other glassblowers work," says three-time Pipe Classic veteran Chris Vickers, aka "Hickory," a Danby glassblower who won first place at Pipe Classic 6 with a mushroom-themed bong. "Even someone who's been blowing glass for 15 years can look at a finished piece and go, 'How did they do that?' So you're constantly learning."

Another part of Pipe Classic's appeal is its fairness. Eusheen, who's competed in other national glassblowing tourneys, explains that some other events allow competitors to arrive with nearly finished components and assemble them the day of the competition, giving them an unfair advantage.

"Pipe Classic is not like that," he says. "It's fair in every way. That's kind of rare nowadays."

Contrary to the slacker-stoner stereotype, most Pipe Classic competitors prepare for months beforehand. Hickory, 46, says he attempted several dry runs on his winning piece within the 12-hour window but admits he never finished one prior to the event itself.

"The competition is tough," he says. "You go in knowing these guys are giving it their all and pulling out all the stops. So the pressure is pretty high."

Sometimes too high. According to Bern, it's not uncommon for glassblowers to push the envelope so hard that they break a piece in the final hours, or minutes, of competition.

"We've had multiple people chuck them off the roof of that building," he adds, pointing to a high-rise near Bern Gallery. "It's heavy pressure." Still, even a broken pipe once sold at auction for $900.

But despite the quasi-outlaw nature of his craft, Bern can recall only one actual run-in with police. During Pipe Classic 6, competitor Adam G. — no relation to Bern — was walking back from the judging event at Nectar's with his entry: a black, authentic-looking crossbow. While en route, a bystander mistook it for a real weapon and called the police, who briefly detained the artist. Only after the officer realized the crossbow was made of glass would he let people pose with it in front of his cruiser.

Which is not to suggest that the Pipe Classic doesn't live up to its rowdy reputation. Each year, Bern rents several houses on Lake Champlain where competitors and their partners stay. According to Salt's Field Guide to Pipe Classic 7, a coffee-table book about the event, Bern has burned bridges with several Burlington-area landlords due to loud parties, excessive numbers of guests and unauthorized, late-night motorboat outings.

"There are a lot of degenerates and outlaws in this industry, that's for sure," Bern confesses with a grin. "So when you get them all in one place, it gets a little loopy sometimes."

Still, it's not all bong hits and boat rides. For the night between six-hour sessions, Bern offers hotel rooms to competitors who prefer to be "sequestered" from the temptation to party until dawn.

After 10 years of competition, if Bern has one all-time favorite pipe, he's reluctant to name it. Still, he remembers one especially memorable "performance piece" from Pipe Classic 7, created by Burlington artist Kurt B.

During that event, Kurt B. set up a translucent, backlit screen in front of his bench, so that spectators could watch the shadow of the pipe as it took shape. For hours, its final form remained a mystery.

"Everyone was like, 'What's he doing?'" Bern recalls. "And then, slowly but surely, the silhouette of Sherlock Holmes smoking a pipe started to appear. It was so outside the box, one of the coolest things I've ever seen."

Though the competition is fierce, participants relish the Pipe Classic's collegial atmosphere. Kurt B. likens it to a skateboarding championship, where even competitors are psyched to see a fellow skater land an impressive new move. Little wonder that some competitors spend their down time at the Burlington skate park.

As for Bern, he doesn't mind that he doesn't get to compete himself; he just enjoys watching people blow cool pipes.

"The Pipe Classic doesn't make us money," he adds. "But it does make us famous."

The original print version of this article was headlined "Glass Action"