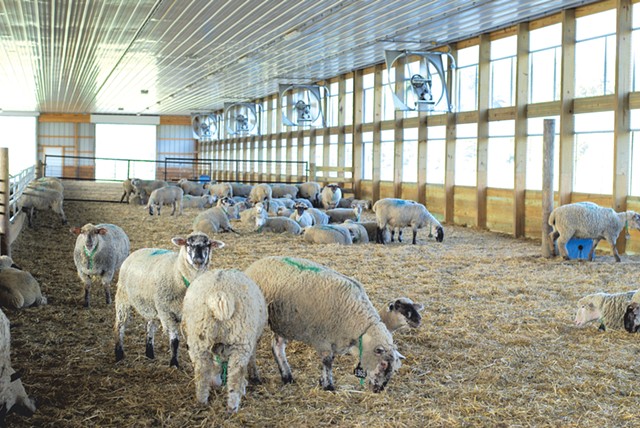 A half dozen barns on a Benson farm house 2,200 sheep — one of Vermont's largest animal herds — that are not being raised for their meat or fleece. The operation's workforce of nearly 50 makes it a top employer in this rural corner of Rutland County. Yet it has drawn little or no notice in Vermont for nearly two decades.

To locals, the enterprise is no mystery. "You mean the secret farm?" Matt Barnes asked with a chuckle as he painted a wall inside the Benson Village Store last month. Barnes said the owners tried to stay "low-key" when they arrived in Benson, but most everyone in town knows about the farm by now.

The owner is a medical diagnostics manufacturing company, the Binding Site. The privately held firm, based in England and with offices in 10 countries, manufactures and sells kits that physicians use to diagnose illnesses such as immune system disorders and multiple myeloma, a blood cancer. The company also invests in research and development of new medical products, according to spokesperson Claire Cooper.

The Benson sheep contribute an essential ingredient for those kits: blood plasma. The sheep have been treated so that their plasma contains antibodies that, when introduced to a sample of a human patient's blood, react to abnormalities and reveal the presence of diseases. The company's name, the Binding Site, refers to this bonding reaction.

Why did a British company come to rural Vermont to raise sheep?

In 2001, an epidemic of foot-and-mouth disease swept through the United Kingdom, killing millions of animals — including those on a Binding Site farm in northern England. Company officials worried that the outbreak would continue across Europe, Cooper said. In Benson, a town of about 1,000, they found a former sheep farm and encountered friendly locals, she said.

The Benson farm is the company's sole sheep operation. An office occupies a small white house on Route 144, an out-of-the-way road near Lake Hortonia. The site spans 650 acres, 618 of which are conserved as agricultural and forest land through the Vermont Land Trust. The town assesses the property at nearly $1.7 million.

Farm manager Dulcie Griffith, a veterinary technician, began the tour in a laboratory building last week. Muck boots and farm overalls hung from hooks at the entrance. Inside, employees loaded jugs filled with orange plasma into insulated crates for the farm's weekly shipment to England, where the diagnostic kits are manufactured. Jugs of plasma were stacked to the ceiling in a refrigerated area.

The room where blood is drawn was white-walled and chilly. A sign asked employees not to feed sheep grain to the farm's five donkeys, even if the animals "tell you they want some," since the grain contains special supplements.

Griffith asked Seven Days not to photograph the lab out of concern for the company's trade secrets. She said lab employees are asked to sign non-disclosure forms.

The farm drew blood from 20 sheep that day. The number varies; higher-ups in England set the schedule, Griffith explained.

When sheep are a year old, workers divide them into groups and administer shots that cause the animals' bodies to produce antibodies to one of a number of diseases, depending on the company's needs. Blood can be drawn from an animal as often as every six weeks, but sometimes a sheep will go months without a "donation" because its antibody isn't needed, said Griffith.

Before workers draw blood, sheep are given mild sedatives intravenously to keep them calm. The process takes several hours; IV fluids keep the animals hydrated. After plasma is separated from the rest of the sheep's blood, the red blood cells are returned to the animal.

Griffith led the way to a sheep "rest and recovery suite" located outside the lab. "This is where they get their cookies and orange juice," she joked, referring to snacks given to human blood donors.

Some of the sheep stopped nibbling hay and ambled over to Griffith and a reporter and allowed themselves to be petted.

The five sheep barns on the property were enormous and clean, with plenty of room in each hay-lined pen. The animals appeared calm as they ate hay and roamed their pens. Griffith said the sheep are kept indoors most of the time to protect them from coyotes and because fans keep the barns cooler than the outdoor temperature.

When the sheep are allowed to graze outside, five "guard donkeys," animals inclined to bray loudly if predators approach, accompany them.

The company is still expanding its flock, purchasing some sheep from local farmers and breeding others itself. When sheep fall ill or are no longer needed for antibody production, they are euthanized under guidelines set by the American Veterinary Medical Association, Griffith said. Their bodies are composted because meat from animals bred for this purpose cannot be sold.

The animals are sheared a few times a year for their health; the company gives the wool to the shearer.

Griffith said the farm has never had run-ins with animal rights activists. She feels confident that anyone who understands the company's high animal-care standards and mission to fight diseases such as cancer would support its work.

"Everybody's somehow touched by illness and cancer," Griffith said. "It really gives what we do here a purpose."

The conditions looked fairly luxurious by livestock standards, but trying to check the company's record in Benson is difficult. 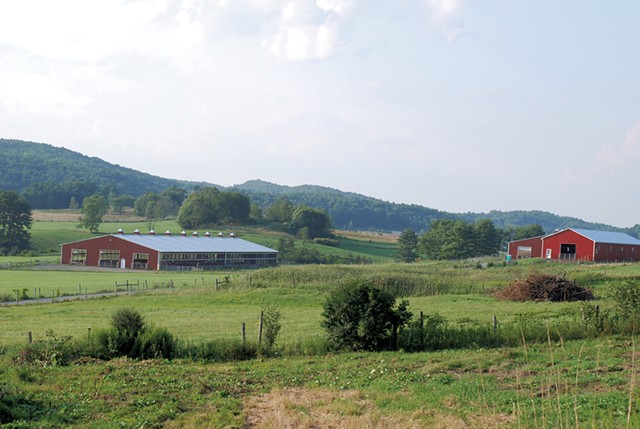 The U.S. Department of Agriculture does inspect animal-related facilities such as this one, but it abruptly removed inspection reports from its website last year, citing court rulings and privacy concerns, the Washington Post reported.

Seven Days filed a Freedom of Information Act request with the USDA's Animal and Plant Health Inspection Service in May for Binding Site inspection reports. When the forms arrived last week, almost all of the information, including the type of inspection and the descriptions of findings, had been redacted. An attached letter said the USDA decided that the "protection against embarrassment or harassment of the licensee" outweighed the public interest in what goes on there.

Kristin Haas, state veterinarian at the Vermont Agency of Agriculture, Food & Markets, said her department has no regulatory oversight of the Binding Site, though the agency has provided the farm with technical assistance. Any animal welfare complaints against the facility would have to be directed to the Humane Society of the United States or law enforcement, according to Haas.

Barry Londeree, state director for the U.S. Humane Society, said he is aware of only one complaint against the Binding Site, submitted last year via a now-defunct website, reportanimalcruelty.com. The anonymous tip alleged that the facility was understaffed and sheep were not receiving enough water. Londeree passed the complaint along to the USDA, but he never heard back.

Dave Martin, president of the Vermont Sheep and Goat Association, said he has not been to the farm but has never heard any complaints about its animal care.

So who would be opposed to the work there?

Animal Free Research UK, a nonprofit that funds and promotes alternative research techniques, told Seven Days in a general statement about antibody production that animals suffer when their bodies react to the initial injections that start the antibodies. The group acknowledged the historical importance of animal antibodies as the only method to detect certain cancers. However, the statement said new laboratory technologies exist that make the use of animals obsolete.

But Binding Site spokesperson Cooper said no viable alternatives to create the antibodies exist. She said the company's immunizations work exactly like a human vaccine and do not cause infections or harm to the sheep. It is essential to have healthy, stress-free sheep, or the quality of the tests can be compromised, potentially affecting the end results for patients who use the medical kits, she said.

In Benson, townspeople said they appreciate the farm's presence.

The Binding Site has a "very positive" affect on the town, according to Benson Selectboard member Tory Tyminski, who cited the number of people it employs.

To talk to other residents, Seven Days stopped by the United Church of Benson last week, where, by odd coincidence, the American Red Cross was conducting a blood drive — for people.

"They were very hush-hush when they first came because it was weird. Now they are more open about their work," Norma Phillips said about the farm. As she ate cookies after donating a pint of blood, she added that it's "fabulous" that the company hires locally. Her nephew was contracted as an electrician to wire barns for the site, she said.

"I don't see a problem with them," said Bob Stannard, owner of Vermont Natural Beef, who was also donating blood. "I think it's great to have a business like that in a town like Benson, employing people; it's good to see that." Friends who work there have told him the company practices humane animal handling, he added.

A few miles away, Greg Fontaine, owner of G & L General Store, said employees from the nearby sheep farm stop in regularly to buy his food and gas. When a reporter later returned to the store for gas, his wife, Lisa Fontaine, demanded to know whether an article would portray the Binding Site in a positive light. Remember, she advised sternly, the farm is doing "good work" in the fight against cancer.

Despite disabilities, beloved family member was “capable of feeling joy, sadness, pain, love and kindness — and expressing it in her own unique and special way”