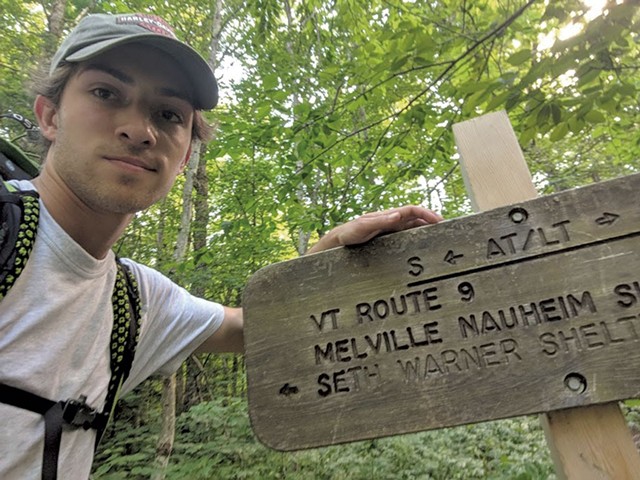 When Zach Rothammer tells people he hiked the Long Trail alone last summer, they usually ask him whether he was ever scared.

One time, a grouse's whirring wings startled him at the end of a rainy day. The second, and more frightening, experience was when he saw two baby bears without their mama on the trail. He managed to slip around the cubs without incident.

Zach was 16 when he hiked Vermont's famous 272-mile foot trail in just 16 days, an average of 17 miles a day. The wiry and articulate young man — who will enroll this fall as a Craftsbury Academy senior and as a freshman at Northern Vermont University — trekked most of the trail alone.

While Zach was an experienced day hiker, he had never backpacked before. Seasoned hikers assured him that fear would virtually vanish after a few days on the trail. "I didn't think it was true," he said, "but it is."

The Long Trail, constructed by the Green Mountain Club between 1910 and 1930, follows the main ridge of the Green Mountains from Massachusetts to Canada. The trail's southern 100 miles overlap the 2,200-mile-long Appalachian Trail, which spans from Georgia to Maine.

Zach took inspiration from his older brother, Greg, who hiked the trail during his senior year of high school. In 2007, Greg died in a car accident at age 21.

To prepare for the journey, Zach — a self-described perfectionist — and his mother attended an informational presentation at the Green Mountain Club in Waterbury for hikers aspiring to complete the trail, who are also known as "through hikers" or "end-to-enders." He read numerous books and asked experienced hikers for advice. The most useful information, however, he gleaned from hikers' blogs — particularly about what to eat. His standbys were chocolates, granola bars, dried fruit, freeze-dried dinners, and gummies for pick-me-ups. His official Long Trail map, purchased for $12.95, was his guidebook. Printed on waterproof paper, it survived the journey in admirable condition. The small Jetboil stove he used to boil water for instant suppers and oatmeal and a Sawyer Squeeze water filter were prized pieces of gear. His "really expensive" backpack remains permanently sweat-stained.

Beginning his hike near Williamstown, Mass., Zach estimated his trip would take around 26 days, an average time for a hiker to complete the trail. On his fourth day, however, he met a man in his 60s — known by his trail name, Sliced Beets — who quickly passed him. Later, the two met up in a shelter, and spent part of the next day hiking together, until the older man outpaced Zach. While together, Zach mentioned his dream to finish the hike in 16 days, to match his 16 years of age.

"You can do it if you set your mind to it," counseled Sliced Beets, before the two parted ways.

Inspired, Zach became determined to meet his goal. The going wasn't always easy, though. "There were moments that were awful," he admitted. On his second day, he got drenched by rain, read the map incorrectly and ended up at an open-sided fire tower instead of the solid shelter where he had anticipated he could dry off. He sat beneath the tower, miserable and wet, eating cheese and crackers.

But Zach persisted — and reaped both blisters galore and a greater appreciation for his native state. With awe, he described summiting Mt. Mansfield in the evening and encountering only one other hiker. In the distance, he saw a thunderstorm rolling in, far enough away that he wasn't alarmed. "The show was absolutely amazing," he remembered.

Not realizing that a few shelters require a $5 fee, he hadn't packed any cash. Twice, strangers gladly offered to pay his way. "Hikers are really cool people," he said.

His parents, Sarah and Rick Rothammer, and then-12-year-old brother, Connor, brought him food and dry clothes along the way and spent a few nights with him. Sarah, an aspiring Appalachian Trail hiker, was an enthusiastic supporter. When Zach finished, however, she realized, "I had been holding my breath, unconsciously."

The final day, he walked out at the Canadian border, near North Troy, with his brother, mother and aunt. Knowing he had finished — in the time frame he had hoped for — was "amazing and joyful, but also somewhat surreal."

For so long, he had been in a Go, eat, sleep mindset that it was hard to grasp he had reached the end. "That's when," he said, "my feet really hurt."

For more information about the Long Trail, visit greenmountainclub.org.