Paul Ugalde shows musketters-in-training how to make the cut 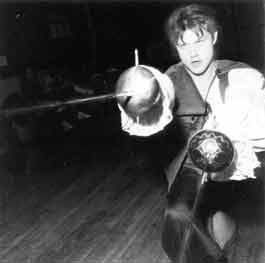 Three musketeers raise their swords in salute, blades meeting tip-to-tip with a clink of steel on steel. The swordsmen regard the apex with pride, hold the pose very still, as if waiting for someone to take a picture. No one does.

Instead, a moment later, another swordsman dashes in front of the trio, meeting yet another foe on the way. Their blades clang together. One of the combatants falls. The sound draws a dozen or so swordsmen from all angles. Unholy whup-ass ensues.

This opening scene in Lyric Theatre’s upcoming production of The Three Musketeers is remarkable for a couple of reasons. For one, it may combine more fight combat in the first five minutes than in all of the musical-theater troupe’s past productions combined. That’s why director Paul Ugalde refers to it as “the Cuisinart of Death scene.” For another, after this panicked prologue, the rest of the play is not a musical.

Working with a script penned by Peter Raby for the Shakes-peare festival in Stratford, Ontario, Lyric’s Three Musketeers tells the by-now-familiar tale of a trio of elite swordsmen in 17th-century France — Aramis, Porthos and Athos — who initiate a fourth, D’Artagnan. The newcomer joins up just in time to foil all manner of challenges to the throne, rescue damsels in distress and help a hapless villager or two.

Do not call these daring do-gooders “swashbucklers,” though. As Ugalde notes, the term refers derogatorily to one who boastfully wears one’s buckler — a small shield — on one’s “swash,” or belt. In the musketeers’ day, the buckler, as well as the unwieldy broadsword, had been traded for the lighter, roughly yard-long swords associated with the finessed and fanciful combat of The Three Musketeers or film fable The Princess Bride.

For Ugalde, there’s a connection between the two tales. To earn his fight certification from the Society of American Fight Directors, he and fight partner Patrick Clow, who plays musketeer Aramis, performed a seven-minute fight scene from The Princess Bride using three methods: unarmed combat, rapier-dagger and quarter-staff. The audition required that Ugalde follow a piece of existing fight choreography, but he had to work the spoken lines into the contest. Now a certified actor-combatant, he has three more levels to attain: fight teacher, fight director and fight master.

The knowledge Ugalde has gleaned in four years of formal training is essential to staging The Three Musketeers. The play contains 41 scenes, 19 of which have “some kind of physical mayhem,” the director says, including six or seven full-blown fights. That adds up to a lot of work with actors who have little, if any, fight training — never mind directing the rest of the play. The key to getting the moves down, says Ugalde, is for the combatants to embrace fighting as choreography and acting, with an emphasis on making each other look good. “No one wins this fight,” he says. “You have to wait for your partner. This is a tool for acting, not a parlor game.”

Maybe not, but as the director calls out terms and numbers — “Rock back, parry seven” — you almost expect someone to yell “Bingo!”

The numbers correspond to target points on the victim’s body, where attackers aim their air thrusts and cuts. The numbering system, an international standard, tells both attacker and defender exactly where the blade is headed and which defensive move — called a parry — should meet it. As combatants memorize these sequences, the pace of the fight can quicken to look spontaneous. The system also allows fight choreographers to borrow fight sequences from other plays and films, such as some two-sword work Ugalde says he lifted from Mask of Zorro. Another ready-made sequence seen in lots of movies and plays is the so-called “Baronial Hall” pattern. Ugalde has incorporated it, too, into The Three Musketeers.

Above all, the numbering system is critical in ensuring safe stage combat. An attacker can also prevent injury by broadcasting his next move with an exaggerated wind-up for a cut or thrust. The swords are duller than real weapons and don’t have sharp points.

Still, accidents can happen. As a student at UVM in the ‘70s, Ugalde witnessed a fellow cast member in Eugene Ionesco’s MacBett take a dagger hilt to the head when he moved to the wrong spot on stage. That student earned 17 stitches for his efforts, and Ugalde earned a lesson that has served him in his work with theater companies all over Vermont. As he tells his stage combatants, if they have to choose between bailing out and looking stupid or risking an injury, go for bailing out.

“It’s tough to explain in an emergency room when you’re in full costume and makeup,” he quips.

Daggers also make an appearance in The Three Musketeers, complicating the choreography with a separate numbering system for target points — the reverse of the sword-point numbers. To make things even more interesting, Ugalde also threw in a bit of scarf-fighting. But he assures the defensive maneuver involving a wheel of cheese was in the original script.

While numbering systems govern rapier and dagger combat, shrewd positioning of bodies and sleight-of-hand make unarmed combat look real. A crossing punch to the face, for example, doesn’t work in profile, since the distance between fist and face is obvious. Turn the bodies so the audience’s sightline on the blow is indirect, however, and the effect is more successfully achieved.

Another trick is a “knap” — the slap of a combatant’s hand on his thigh, chest, or anything else within reach — which sounds like a landed blow. The audience naturally follows the biggest movement, which is usually the punch itself, so they’re unlikely to notice a quick “knap” to the leg. “We’re pulling movements together and putting sound in the middle of it,” Ugalde says. Your brain does the rest. Ugalde will demonstrate these and other fight-combat techniques in a free workshop after the last Three Musketeers performance.

One objective of all the fight scenes is, of course, to create the illusion of actual combat without jeopardizing safety. For Ugalde and his cast, though, the fights must also mesh with plot and character. “At its best, every single fight scene has to have a fight story,” Ugalde says. “It must extend the characters and the situations they’re in.” Fight scenes in The Three Musketeers thus have their own central conflicts, such as a swordsman being outnumbered, wounded or acting out of jealous rage.

Nuances of character should also come out in the way a character fights. In playing the world-weary Athos, for example, actor John Alexander strives to convey both his character’s combat prowess as well as his emotional state. “I think Athos recognizes that he’s better than the average fighter, so that gives me a certain confidence going into a fight. And he’s also got a certain intensity that I’ve put into the fight,” Alexander says. “Other people’s lives are fairly cheap...If somebody talks of killing him, he has no problem dispatching them.”

The body count is pretty high, in other words. But the play is not all swordplay. In fact, the bulk of the full-on stage combat takes place in the first act. The action gallops along in the second act as clanging metal gives way to dastardly intrigues, insidious pacts and sundry indiscretions. The plot twists and turns sharply at times, giving the play a Shakespearean feel — or, as Ugalde sees it, the action-packed pace of a movie.

But when this director yells “Cut!” he really means it.