An artist tests her mettle on the ice, and the canvas 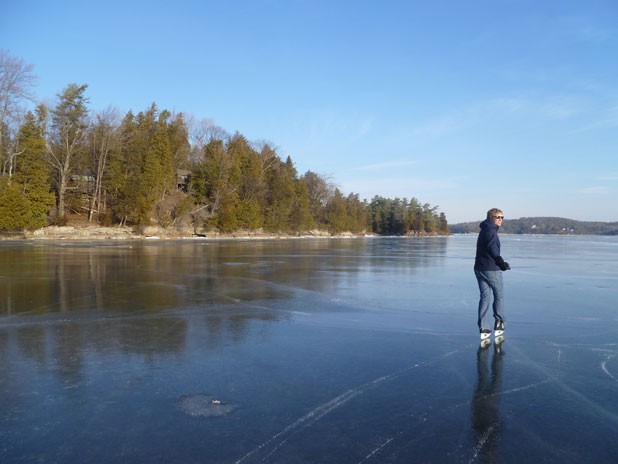 A friend texts me a photograph of bluebird skies with distant islands; it was taken from the black ice in the middle of the lake. You’d think I would be happy for him, right? The photo is so beautiful; I can’t stop going back to it, completely mesmerized but also admittedly envious. Envious that he was out there, that he was brave enough to be on that ice. I am perfectly satisfied with my day until I see that photo.

The next day, a group of friends email to say they’re going out for a big lake skate. That probably means out to the middle of the very deep Lake Champlain. On the ice. Just a little layer of frozen water between them and the silty bottom. Word on the street is that the ice is 10 inches thick, completely adequate for a bunch of skaters and even some four-wheeling ice fishermen.

So I should go, right? No. Too scared. Do you know what’s under that ice? Inky black water that’s 33 degrees, at best. If you find a weak spot and fall in, God help you. But these skaters are experienced. One is even from Canada. His mama may have been wearing skates when she birthed him. They do that up there, don’t they?

Still not going. Second email arrives early on the morning of the skate. This one assures me that they can short-rope me in to keep me from dragging on the bottom of the bay, should the ice give. What I need to feel safe is to stay at home and paint. And drink coffee. That’s safe. Besides, I have a cold. Yeah, I’m sick.

Eight a.m. If I leave in five minutes, I can meet them at the Malletts Bay boat launch and just skate around the dock. I don’t have to go out to where the water under the ice would be over my head; I can just check it out. I get my skates.

Arriving right on time, I nervously grab my two screwdrivers and rope and head down to the dock. The screwdrivers are tied to a rope that goes through my jacket sleeves and around the back of my neck, just like mittens for toddlers. Then they’re taped tip-down to the rope ends, so I don’t impale myself if I trip. But honestly, impalement sounds way better than sinking into the icy depths of Lake Champlain in February.

Skates on, we head out. Am I going out? I guess, just for a bit. And besides, this is just about getting a little Vitamin D; we Vermonters need that this time of year. Almost instantly, I am transformed. The beauty of the ice with its reflections and variety of marks on the surface is so unexpected. The ice keeps changing. One moment it looks like frozen clouds floating in indigo, then big bubbles under the surface, followed by Monet-like patterns that remind me of his water lily paintings.

We skate out, and I am seduced by the safety in numbers idea. We come to a fissure that has probably formed overnight. This giant crack runs across the bay and has opened to reveal dark, scary water creeping up from its depths. We find a narrow spot and, one by one, we cross. Breathe.

We head out and I dig in my pocket for my camera. The first five minutes into the skate, I’m so startled by the landscape that I’m certain I can’t paint it. No way could I capture the feeling of this ice. So I just drink in the views, and don’t even entertain the idea of making this into “art.”

In what feels like the middle of the lake, we find three ice fishermen all set up. Their four-wheelers are loaded with gear, a giant auger bungeed to the back of one of them. Perfectly drilled holes allow the fishermen access to the water, and their buckets are ready for the catch. They reel up perch after perch at an alarming rate. The men seem completely at ease. That’s reassuring.

It’s going on mid-morning and I need to get back soon. We look south and see the Colchester Island Line, north and see the South Hero Causeway. I never thought I would get this far. I make an announcement: I’ve got to head back. No big deal, I will just stay on the original skate marks. Someone offers to escort me, but he would lose the group, and I don’t feel it’s necessary. I got this.

I head back and stop to see the fishermen, who ask if I got lost. “No,” I reply, “I just gotta get back to work.” I explain my strategy of taking the same route. In a heavy French Canadian accent the man tells me to be careful — “De ice changes.” Oh.

With this new information, I decide to skate back like Eric Heiden. No, like Apolo Ohno. Really, really fast; just “git ’er done.” Funny, I didn’t notice on the way out how eerie the shifting ice sounds. This echo is coming from all around, sounding like distant thunder, or a dying whale. Why is it so loud now? And where did this headwind come from?

About half way back, I wonder, What the hell did I just do? My friends are now about three miles away. Should the unthinkable happen… My thoughts wander to the worst-case scenario: Do I really have the strength to pull myself and what would be a 50-pound-soaking-wet parka out of a hole in the ice? With two little screwdrivers? I had to get back to work. Work? Do I even have a job? Shit!

I come to the big fissure and try not to think that, at any moment, another could open. I cautiously cross it.

The boat launch is in the distance, and I should be there in five to 10 minutes. People are skating ahead in the bay. This is good sign. Today, I have challenged myself in a big way and I am almost there. The stupid college quote under my yearbook photo read, “Life is either a daring adventure or nothing at all.” That’s total horse poop, if it’s meant to describe myself. But today, I’m living by it.

Ice boaters are launching as I arrive on shore. The dozen pair of boots we’d left lined up along the dock brings a smile to my face. I imagine the group being relieved to see mine gone, knowing I returned safely and they don’t have to call the search-and-rescue team. I get out my phone and text my husband, my best friend and my pals on the ice, who may be somewhere near Canada by now. Just three words: “Off the ice.” I feel my blood pressure drop.

Arriving home, I have this overwhelming urge to paint the ice. It’s a puzzle, a really hard one. How do you make ice look frozen and not like open water? I have no idea, but a blank canvas is ready to go. I don’t even get out of my sweaty skate clothes before starting on an oil painting of the morning’s skate.

Six p.m., still working. Abandoned everything else I was going to do today: no shower, no dinner started, didn’t hang the pictures I promised. Just painting.

I admit to praying for snow as much as the next person, but apparently there is at least one advantage to a cold and snowless winter: black ice on the lake.

Katharine Montstream is a Burlington painter. Her work can be viewed at kmmstudio.com.