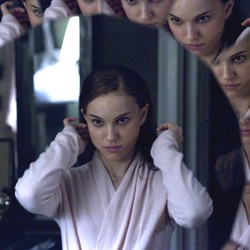 My taste for the horror genre developed young when someone made the mistake of giving me an illustrated book of stories from classic ballets. From the goth waifs of Giselle to the living puppets of Petrushka, each tale offered something creepier than the last. I was especially riveted by the demise of Odette in Swan Lake, an enchanted swan maiden who loses her last chance to be human when her prince dances off with her evil double. The final picture showed the heroine embracing death, roiling waters closing over her plumage.

I never saw a production of Swan Lake that haunted me like that image, or like Tchaikovsky’s score for the final scene. Until now.

Of course, Darren Aronofsky’s Black Swan isn’t a filmed ballet, though it does feature dancing from stars Natalie Portman and Mila Kunis and their professional ballerina doubles and ravishing, lurid stage costumes by Rodarte. It’s a ballet horror movie.

Think the nightmarish ballet from The Red Shoes extended to feature length, or Dario Argento’s Suspiria with more dancing. I would hesitate to recommend Black Swan to any dance fan who can’t stand the work of the two demented Davids, Cronenberg and Lynch. But the only monster in it is the specter that looms over ballet and so many other artistic pursuits: the pursuit of perfection.

Portman plays Nina, a member of a New York company who’s never been able to snag the leading roles both she and her mom (Barbara Hershey), a former dancer, desperately want for her. “I want to be perfect,” Nina tells the company’s director (Vincent Cassel), when he warns her he doesn’t think she’s capable of embodying both Odette and her sexy double, the Black Swan.

His reply seals Nina’s fate: “Perfection’s not just about control. It’s also about letting go.” When Nina meets a potential rival, a tattooed dancer who does “let go” (Mila Kunis), her transformation begins. But Kunis isn’t her only counterpart (and possible antagonist). Though Nina seems like a sheltered child, she spends her life in terror, spying Swan Lake’s evil magician everywhere — in her smothering mother, in the lecherous director, in a jealous, aging prima ballerina — maybe even in herself.

As he did in The Wrestler, Aronofsky spends a lot of time following his protagonist, sticking the camera practically on Portman’s shoulder. (No wonder Nina is paranoid.) But when the actress faces us, she shows a depth and rawness of emotion we haven’t seen from her before. And when she finally dances the title role, the result is an unforgettable scene in which staging, music, costuming, art direction and performance unite to produce something like a waking dream.

Black Swan detractors say it’s a melodrama on well-trodden themes. I agree. Tales of the self-tortured, sexually repressed artist have been with us since before Swan Lake was composed; they probably inspired some of those death-obsessed ballets. But, by taking the artist’s mad pursuit seriously and granting us feverish glimpses of the transcendence she seeks, Aronofsky gives Portman her most convincing role (for my money, one of her only convincing roles). He also lifts camp to the level of art.