Black Like Him: The Buffalo Soldier, by Chris Bohjalian 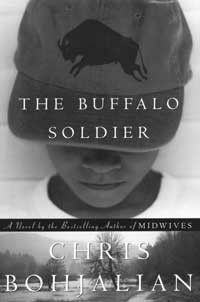 It was just a few months ago that Lincoln author and Burlington Free Press columnist Chris Bohjalian finished the book tour for his last novel, Trans-Sister Radio. Now the prolific author has yet another offering, The Buffalo Soldier, a plot-packed novel about a damaged Vermont family that proves the axiom, "it takes a village to raise a child."

Set in the small town of Cornish, Vermont, the book opens with a tragic scene — a flash flood takes the lives of 9-year-old twins Megan and Hillary Sheldon, shattering the picture-perfect lives of parents Laura and Terry.

Dazed and depressed, Laura longs for another child — a biological impossibility after her tubal ligation when the girls were 3. Terry, a state trooper, is confused by Laura's mood swings, and when she suggests that they become foster parents, he wonders if he can become emotionally invested in a child who isn't his own. Despite his reservations, the Sheldons apply to become foster parents, expecting a young girl. They are surprised to find that Alfred, their new charge, is a "slightly troubled" 10-year-old African-American boy.

While Laura grows fond of Alfred, Terry becomes increasingly distant. Alfred isn't interested in sports or scouting, and the two have little in common. Terry's growing alienation from Laura and Alfred drives him into the arms of Phoebe Danvers, a cashier at the general store near Terry's deer camp. Phoebe becomes pregnant, further complicating Terry's relationship with his struggling family.

Meanwhile Alfred, who is unable to ease into the well-established social circles of his sheltered white peers, sneaks off by himself to the town cemetery, where he sits listening to music and wishing for a cigarette. His only hope of fitting in seems to be through his relationship with the Sheldons' neighbor, Paul Hebert, a retired professor.

When Paul and his wife return from a cross-country trip, they bring Alfred a book about the Buffalo Soldiers and a cap with the soldiers' insignia. Alfred warms to the stories of the bravery and resourcefulness of these black soldiers and, thanks to Paul's decision to buy a horse and teach him to ride, he begins to see himself as one of their descendents.

With all its weighty themes — grief, adultery, fertility, racial tension, intergenerational dialogue — The Buffalo Soldier has the potential to be a powerhouse novel. But Bohjalian has bitten off more than he can chew. All of the competing issues don't leave room enough either for solid character development or thorough consideration of the conflicts he devises.

Which is not to say that it is not exciting — readers will stay hooked until the last page to find out: Will Alfred transcend his troubled past? Can Laura and Terry save their marriage? What will become of Phoebe Danvers' child? Bohjalian answers these queries as skillfully as he advances the plot. The tension builds as the scene shifts from deer camp, where Terry meets Phoebe, to the Sheldons' home, where Laura and Alfred begin to bond, to the barn where Paul teaches Alfred the skills he needs to save himself from a possibly self-destructive future.

Bohjalian divides the book into four parts, not including the prologue that tells the story of the flood that killed the Sheldon girls. Each part is composed of chapters titled "Terry," "Laura," "Alfred," "Phoebe" and "The Heberts." Bohjalian narrates the story in the third person, but with a voice that changes to fit each character as indicated by the chapter heading. It blurs the line between the narrator's interpretation and the character's own thoughts. This approach works fine, except with Alfred.

Bohjalian strives to express Alfred's thoughts in language appropriate to a 10-year-old Burlington boy. He often does it well:

He remembered the smell of the clean clothes that he wore, and the way Mrs. Howard always seemed to be dressing him straight from the dryer: The clothes were warm.

But does Bohjalian really mean to attribute words like "astonished," "inflection" and "cerulean" to the pre-pubescent child? Particularly incongruous is the following passage:

He didn't hear her crying as she had that night in November when Terry had been away at deer camp and she was alone, but he guessed that she was. How could she not? When she had told him that she and Terry were going to spend a little time apart, there had been a balneal gauze across her eyes and her voice had been wan.

And this is from the same boy who reminiscences about the time when his crack-addled mother "had first started to choose her rock and her men over him."

Diction isn't the only problem Bohjalian has with Alfred; aside from a few recollections of trauma the boy suffered in other foster homes, and some memories of a Vietnamese friend named Tien, Alfred's only pastime — the only one that Bohjalian explains in depth — is his interest in the Buffalo Soldiers. One example: Alfred constantly listens to music. He wears his headphones everywhere. What kind of music is it? What do the lyrics say? Bohjalian never mentions it, though he begins the novel with a quote from Bob Marley. All we know about Alfred's music is that it's loud, and that it makes both Laura and Terry "deeply uncomfortable."

This tendency towards stereotyping extends to other characters as well. Laura never becomes more than a grieving mother defined primarily by her relationship to her children — dead and living. In the first scene after the prologue, Alfred sits on the steps of the house. Laura stands behind him, in the doorway. Alfred observes, "For a long time she stood there, watching him, but he was resolved to neither look up nor turn around. She was being needy again."

Eventually Laura begins to engage Alfred, telling him all about her girls, for instance. But though she has a job at an animal shelter, we never see her interact with anyone outside of her family's drama. At least Terry — who can't seem to break free of his authoritarian role — gets to make a few traffic stops and respond to a crisis situation.

Finally, The Buffalo Soldier fails to address adequately the racial tensions it evokes. True, the back cover doesn't promise that this book will explore the difficulty of raising a black child in an all-white town. The synopsis describes the book as a story about "the complexity of marriage, the bond between parents and children, and the relationships that cause a community to be a family."

But it's implied from the title that Bohjalian intends to tackle racism, and he reinforces this aim with the quotes about the Buffalo Soldiers, presumably from the book that Paul gives Alfred, that appear at the beginning of each chapter.

At first it seems as if Alfred's skin color will cause conflicts. Early on, he admits feeling "like a zoo animal — and maybe not even a zoo animal you liked. More like a zoo animal you didn't quite trust." And he encounters a few subtle snubs — Alfred suspects that a friend's father locks up the house guns because the black foster child has come over to play.

But then Bohjalian says of the boy, "Alfred knew a little history, just enough to sense that no one here discriminated against him because he was black. No one called him names. No one wanted him to have less of anything." Bohjalian never contests that statement. And while it's true that Vermont is hardly the pre-1960s South, this seems far too rosy a picture, given that the state's lack of racial diversity has bred a culture of suspicion and mistrust, a fact that occasionally makes headlines in the newspaper for which Bohjalian is a columnist.

It's true that Laura senses discomfort among her neighbors. Their remarks are mostly of the polite, liberal variety; one woman tells her, "You know, Laura, you can hardly tell he's an African-American: He might just be a boy with a very dark tan!" And the pastor pats Alfred's head, saying, "God loves all children. Black. Yellow. Whatever. It's good to have you here, son."

Bohjalian also calls Terry's feelings about Alfred's race into question. Terry says he doesn't believe that his reluctance to accept Alfred has to do with his race, but also admits that he has "probably said about a thousand words to black people in his whole life." His lieutenant warns him, "What do you and Laura really know about a kid like that — or, for that matter, raising a kid like that? You ever done anything more with a black person than bust one?"

The question is out there — Terry denies to himself that Alfred's race bothers him, but doesn't it? Does he dislike Alfred because the boy doesn't play sports, or because he's not Terry's own flesh and blood, or is it because he's black? Bohjalian never really answers the question.

In fact, the only person who obviously has a problem with Alfred's blackness is Alfred, a problem that Paul Hebert solves by introducing him to the Buffalo Soldiers. Alfred's blackness ends up being more of a prop than a rich vein from which the story mines meaning. From a pro like Chris Bohjalian, you'd expect a little more depth.