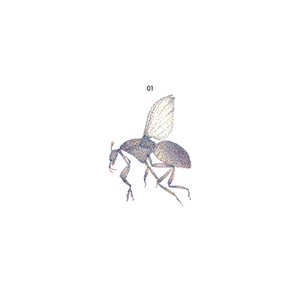 Mood and aesthetics are especially important considerations for young new artists trying to find their audience. And since 21st-century singer-songwriters are expected to be sentient PR campaigns, catering to potential listeners with a never-ending torrent of content, the sights that accompany the sounds are a huge part of the package. I suppose it's always been this way to some extent, but branding has never been more prevalent in music than now.

The video for Black Fly's "Sign 2," a percolating dance jam from the Richmond resident's debut LP, Black Fly 01, shows off his personality — and physicality. Real name Joseph Rittling, the electro-pop artist proves to be quite the limber, quirky dancer. Animated by the track's sharp cracks and plunging synths, he jerks his body in delightful ways through warehouses, dark country lanes, rolling hills and windy moors. For a presumably low-budget video, it packs quite a punch.

The moniker Black Fly implies a certain level of macabre. The production on Black Fly 01 is shadowy but only flirts with being full-on disturbing. More often than not, Rittling plunges into darkness only to ascend to sun-drenched heights. Love hovers at the center of his universe, a red giant in an otherwise starless quadrant of space. He sings with a vocal rasp overflowing with power; his words melt into each other as he languishes in amorous feelings.

The quantized square bass on opener "Dipped" recalls the foundational elements of '80s English new-wave acts such as New Order and Depeche Mode. But Black Fly's music isn't a pastiche. Eighties pop may linger in its DNA, but it's fueled as much by contemporary electro-pop, R&B and hip-hop elements — not to mention an "American Idol" sense of grandeur — as by music from 35 years ago.

Black Fly 01 is a dynamic assemblage. "Sadsap" chugs along with locomotive beats and a ghostly trumpet solo, while "Green" is an aerobic workout built on simmering hi-hats and spurts of synth.

Penultimate track "Z's Ocean" is a sprawling torch song, a classically constructed piano ballad with a sense of trepidation. It lingers on a question Rittling sings: "Can I take my love down to the ocean ... and fade away?" But does he look to the sea as a source of life or a black, unknowable void? He asks these questions again and again, wondering whether he can "cast my fear," "burn my body" and "throw the world out" into the waves.

Black Fly 01 is a solid entry from a previously obscure Vermont artist. Rittling proves a compelling and appealing personality, one with a strong sense of composition and substantial pipes.

Black Fly 01 is available to stream on all major services.