Checking in with the Carolina Chocolate Drops' Dom Flemons 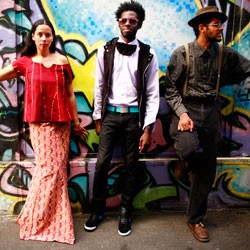 Since meeting at a small gathering for black old-time musicians in 2005, the Carolina Chocolate Drops have become one of the most successful young string bands in the country. The North Carolina-based trio, mentored by legendary fiddler Joe Thompson, draws on a rich yet largely underappreciated component of American old-time music: black string bands. Infusing an appreciation for tradition with modern sensibilities and techniques, the Carolina Chocolate Drops represent something deeper than mere revivalism. They represent a musical evolution.

Seven Days caught up with Chocolate Drops banjo player Dom Flemons by phone in advance of the band’s upcoming gig at the Barre Opera House on Saturday, February 5.

SEVEN DAYS: Was it surprising for you to learn that there was such a rich history of black string-band music?

DOM FLEMONS: Oh, absolutely. We all had some sort of notion about it when we came to the Black Banjo Gathering in 2005. But, for the most part, it was just kind of a gradual thing that we all learned about. We didn’t really know about any of this music either, just like anybody else. And even as we’ve played, we’re still learning more about it, too.

SD: Given that traditional music has been steadily growing in popularity, why is it only recently that people are developing an interest in black old-time?

DF: The string-band music and country music that’s been popular, that’s the easy stuff to get. It’s, like, if you get into ’60s rock, the Beatles are the first thing you’re going to come up with. But then you can get into other bands like the Zombies or the Hollies. But that’s not going to be what happens first.

SD: If you were to listen to black string-band music in a vacuum, what would be the stylistic and thematic differences from what most people associate with old-time?

DF: It matters who you’re talking about. It’s very much a Southern thing, but also was a function of where the music was [made] in the Southern culture. And that’s true with both black and white string-band music.

DF: There’s more rural stuff and there’s stuff that’s more urban. Like, the Grand Ole Opry is an urbanized version of hillbilly music. So, what happened was that people were coming from the outer reaches of Nashville, from the country, into Nashville to play the music. Then, that was broadcast outside of Nashville. And even those guys, they knew a lot of black string bands growing up in the country parts of middle Tennessee.

But the black string bands were very different because they evolved into blues bands and jug bands … so you find examples of those, too. Like, Jim and Andrew Baxter, for example. They have a very urban sound, and they were from a part of Georgia where there was a more urban and cleaner sound. Then there are folks who were recorded in the field, not on a commercial record.

SD: And what were the stylistic differences there?

DF: The more rural sound is often a more syncopated sound. The banjo tends to have a different roll. It’s almost like funk bass, where it’s really, really wild and syncopated, while the fiddle is holding down the tune. Other times the black string band sounds just like white string bands, which is one of the reasons it never really caught on — it wasn’t different enough. The public at the time wanted to hear the blacker music done by black people, not the white-derived music from black people.

The same thing happened with religious music. People drifted away from the white-derived black spirituals, and gospel became the thing after that because it was a blacker form of expression.

SD: So, it’s sort of like the difference between Motown and Stax, where one was a more polished, groomed sound and the other a grittier, more natural type of soul music.

DF: That’s right. And you can see the differences there, culturally. In Detroit and Memphis, you have two different sets of people and two different audiences and different music communities happening. Soul music is actually a very good comparison with how black string bands worked.

SD: Traditional music seems to be experiencing something of a youth movement, both in terms of drawing younger fans, and younger bands starting to explore the genre and take it in new directions. Why is it resonating with youth culture more now?

DF: I think the interest has always been there. But I think it’s different enough from the popular music that people are hearing that they’re drawn to it and want to try it out. I mean, it’s not rocket science to play old-time music. It’s very simple. Some people go at it with a punk aesthetic, where it’s simple and you can just wail away on it and play as hard as you can, which is good enough in itself. But there are more outlets now, too, especially festivals. And there are movies like O Brother, Where Art Thou?, Ghost World and a movie that inspired us, Louie Bluie. Even things like Johnny Cash’s American Recordings, Tom Waits doing old-time music on Mule Variations — those sorts of things have permeated and started changing the pieces of the puzzle to make it something new.

DF: Right. The Carolina Chocolate Drops, we’re going to end up like the first rock-and-roll singers, where we’re kind of older to these younger kids wanting to play old-time music, too. Like, you see Chuck Berry and Bill Haley … they’re not young people. Those people were doing other types of music and hitting middle age when they were playing for younger people. Then the younger people take it somewhere else — Buddy Holly, or anybody on Sun Records.

SD: You mentioned a “punk aesthetic.” Do you see parallels between folk music and genres like punk and hip-hop?

DF: Absolutely. And you mentioned hip-hop — people haven’t delved into that aspect too much, yet, which I’m really waiting on. I can’t wait to see somebody else do it. The idea in my head is to have a country-blues album and have hip-hop artists do it, but do it pretty straight. Cee Lo Green’s new song, [“F*** You”], that could work. Or even “Tightrope” by Janelle Monae, you could make that into a string-band number. There are parallels all over the place.

The Carolina Chocolate Drops perform at the Barre Opera House on Saturday, February 5, at 8 p.m. $10-29.