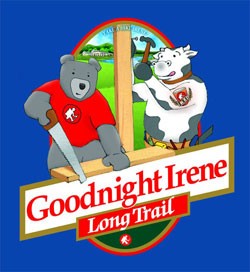 During Tropical Storm Irene, the swollen Ottauquechee River lapped at the deck of Long Trail Brewing Company in Bridgewater Corners, but the brewery survived relatively unscathed.

That wasn’t the case for some of Long Trail’s employees and neighbors, whose homes were ravaged by the storm. For a full week, the brewery put together lunches for hundreds of people each day; Long Trail chartered a helicopter to deliver supplies to Rochester, and some employees rode ATVs into cut off towns.

Though life is returning to normal, Long Trail is still extending its charity with a specially brewed ale, Goodnight Irene, whose sales will benefit the Vermont Farm Disaster Relief Fund, the Vermont Community Foundation and the Vermont Foodbank.

“We brewed it to benefit those in need, says Ryan Chaffin, Long Trail’s regional sales manager. “It’s an easy-drinking brown ale with notes of chocolate from the malt and a nice, floral hop taste.”

Goodnight Irene was released last week and is on tap throughout the state.