The doings in Plattsburgh City Hall rarely grab the international spotlight. But last Thursday, the mayor of the sleepy upstate New York burg across the lake from Burlington explained that he'd just gotten an email from a person in Sweden complaining about the city's moratorium on electricity-hogging cryptocurrency companies.

That's how far news has traveled about the Plattsburgh Common Council's March 15 vote to prohibit crypto companies from opening within city limits for 18 months. With Mayor Colin Read's support, the council blamed the industry for sucking up Plattsburgh's cheap electricity and causing a spike in rates for everyone else.

Critics say that city leaders are Luddites who don't understand the technology, Read said. But they're wrong, and many supporters see "that we're doing the right thing," he continued. "This is an industry of dubious ability to create jobs."

Plattsburgh's cheap power is at the center of the debate. The space-heater-size computers that process or "mine" Bitcoin transactions gobble power, especially when the machines are massed by the hundreds or thousands in a warehouse setting.

Bitcoin is a global digital currency that is not secured by banks. A mysterious entrepreneur who goes by the pseudonym Satoshi Nakamoto launched it in 2009 to allow people to anonymously buy, spend and trade an online currency, avoiding fees and regulation. Bitcoin is increasingly accepted as legal tender; a Williston lawyer announced last year that he would take it. And investors have earned millions trading the currency and similar ones such as Ethereum, though some economists warn that they are overvalued.

People also make money by "mining" Bitcoin — that is, using specialized computers tied into a decentralized, global network in a race to solve complex math problems. These computations serve to process and record new Bitcoin transactions. Those who win the computational race — generally, the people with the fastest computers — are rewarded with new digital Bitcoin tokens.

To maximize profit, large-scale "miners" scout for places with low power costs, which it turns out, puts out-of-the-way, often-overlooked Plattsburgh on the map. The city on Lake Champlain has rarely landed on "best list" rankings — until now.

"We've got some of the lowest industrial electricity rates on the planet," Read said.

Plattsburgh's residential rates are 63 percent lower than the average in the U.S., and industrial rates are 61 percent lower, according to rating company Electricity Local. Electricity is such a bargain that many Plattsburgh residents still heat their homes with it instead of natural gas or oil. Rates average 4.36 cents per kilowatt hour for residents and 2.61 cents per kilowatt hour for industrial users.

How good is that deal? By comparison, consider Burlington, where the industrial rate averages 11.52 cents per kilowatt hour, about 72 percent greater than the national average, according to Electricity Local.

Plattsburgh and its publicly owned Municipal Lighting Department get the bargain rates courtesy of a hydropower deal that was forged back in the 1950s, when the Moses-Saunders Power Dam was constructed on the St. Lawrence River. But there's a hitch. The city only gets so much power; if consumption exceeds that amount, it has to buy additional electricity from more expensive sources.

That happened in February, and bitter cold was not the culprit, according to the mayor. A surge in the demand for power doubled the electricity bills of some residents; major employers complained.

City officials blame a handful of cryptocurrency operations that have set up shop within the last three years. The largest of these, Coinmint, a Bitcoin mining operation based in Puerto Rico, now has at least two Plattsburgh sites: one in an old strip mall and the other in a former wallpaper factory. The Coinmint operations are using a combined total of 10 percent of the city's electricity, by some estimates.

Read rejects the notion that wealth generated by these cryptocurrency companies will trickle down in the community. They employ only a handful of people, according to the mayor, who is a former professor at the State University of New York in Plattsburgh and holds a PhD in economics, a law degree and a bachelor's in physics. The city gets no share of corporate income taxes, either, Read said: "They aren't going to be parking their yachts in Plattsburgh. They are going to be parking their yachts in Monaco."

The owners of Coinmint did not respond to a request for comment. But several people involved with smaller operations agreed to be interviewed, and they shared their concerns about the moratorium.

Ryan Brienza grew up building his own computers and designing apps in Beekmantown, just outside Plattsburgh. The 18-year-old graduated from the town's public high school last year and deferred enrollment at Clarkson University. He founded a cryptocurrency mining company in a leased space at the Imperial Industrial Park in Plattsburgh. Coinmint also rents space in the building.

Last Thursday, Brienza gave this reporter a tour of the operation in the ramshackle industrial complex near the Saranac River. 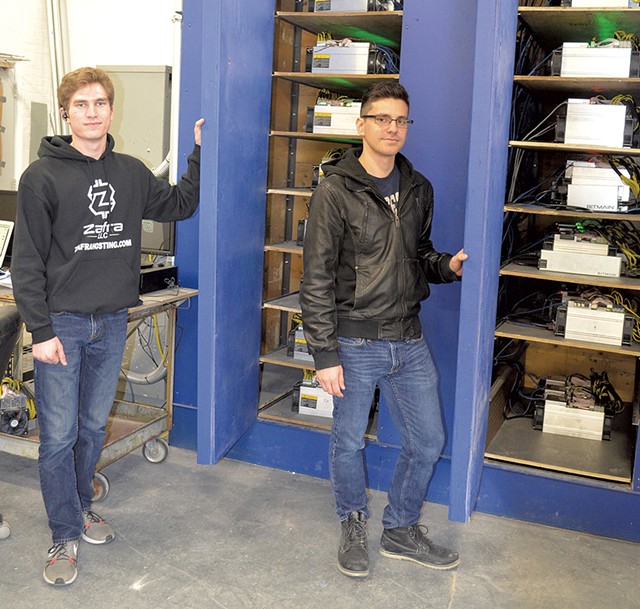 A bank of about 100 boot-box-size computers roared on shelves against a wall. Brienza and his partners — who include his father, Greg, an electrician whose company does industrial-scale jobs — want to expand to host as many as 5,000 "mines," or processors, at the Imperial site.

But the moratorium could block that plan, at least for the next 18 months — an eternity in the fast-paced cryptocurrency industry in which successful "miners" can make millions in a month.

"We're trying to work with the city and get this lifted quicker than the 18 months," Brienza said. Electrical rates could be structured in a way that serves everyone, he said: "It's not right for us to make a bunch of money and have the rates go up."

How big is "a bunch," exactly? "It's profitable, I'll tell you that," he said, declining to be specific.

It's true that cryptocurrency operations need few employees, he said. He manages his company's 100 machines on his own and isn't on-site full time. Brienza is perfecting an alert system to inform him when a computer malfunctions so he can spend even more time working remotely.

But he and his father point out that local companies make money doing the wiring and ventilation for heat-generating crypto-company facilities. And their automation could spin off to other types of industries, they believe. They also contend that the nascent industry is putting Plattsburgh on the radar of high-rolling investors. Hedge fund managers and others have been flying in to check out the emerging "mining" scene, Brienza said.

"The last time [the region] got national news was in the prison break," Brienza said, referring to the 2015 escape from nearby Clinton Correctional Facility in Dannemora. The story of a prison worker who helped two convicts find their way out of the state prison is in production for a Showtime series directed by Ben Stiller, and just last month crews filmed street scenes in Plattsburgh.

The cryptocurrency biz might not be miniseries material, but it's had plenty of plot twists. "It's kind of like the Wild West at the moment," said Brienza, who, along with other crypto entrepreneurs, is investigating options in other cheap-power communities near Plattsburgh.

The mantra of cryptocurrency companies is to transition the region, with its dying paper mills and idled aluminum smelters, from "smoke stacks to server racks." Another pitch: Cryptocurrency is a young person's game, and the North Country needs more of those, said Brienza's dad, Greg. The industry could help attract millennials who are interested in the tech sector, he said.

David Bowman agrees. The 27-year-old grew up in Peru, outside of Plattsburgh, and founded a small cryptocurrency company called Plattsburgh BTC in 2015 with just a few machines. He now pays Brienza's company to run them.

Bowman, who graduated from SUNY Plattsburgh and then earned a master's from Georgetown University in biochemistry, isn't in the crypto biz full time. He's enrolled in medical school in Grenada, and that's his priority. But he believes the Bitcoin industry could make Plattsburgh "like a Silicon Valley for the area."

A short drive from the Imperial Industrial Park, Coinmint runs a much larger operation out of an old strip mall called Skyway Plaza. Last Thursday, mining machines inside a retrofitted one-story retail building issued a loud rumble that could be heard outside. Loading bays and doors were open to let the heat they generated escape. Several large fans churned.

Signs hung over the doorways warned "No Trespassing" without revealing the company name.

But many Plattsburgh residents know it's there, and they aren't necessarily happy about it. The moratorium is "only fair," said internet cable installer William Giddings as he shopped at a Family Dollar store, one of the few retail tenants left in the building.

His electric bill — which covers heat and lights — rarely exceeds $70 a month even in the dead of winter. But it hit $170 in February, and he expects the same in March, said Giddings.

He blames Coinmint and said residents should not suffer for its success. "I don't own the business," he said. "I don't get any money out of it."