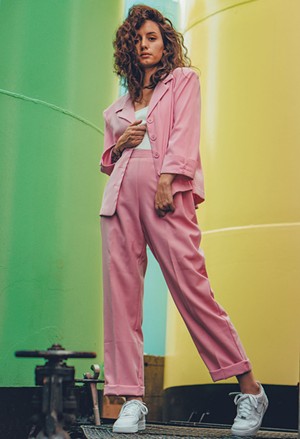 Last winter, the Paris Review published a series of commentaries that attempted to answer the question: What is poetry now? Nestled in the four reports is a keen observation from poet Shane McCrae, who writes that political and confessional poems are having a moment. "Their interdependence," he elaborates, "has opened spaces for voices that have not been well represented, or represented at all, in American poetry before."

Many of those newly emerging voices belong to one of the most accessible subsets of today's poets: young female writers who got their start on the internet. These are the poets who make verse viral, have avid followers and are often derided as lowbrow or simplistic. They use Instagram or YouTube to reach their readers and listeners. Think Rupi Kaur, Hollie McNish, Sarah Kay and Olivia Gatwood.

Gatwood, known for her 2016 viral performance of "Ode to My Bitch Face," will read at Karma Bird House in Burlington on Saturday, August 25, as part of her Alternate Universe Tour. She'll be joined by poets Joaquina Mertz and Angelica Maria Aguilera.

Gatwood's words describe the experience of being a young woman in America. In her verse she addresses harassment, sexuality and shame, making a lyrical attempt to transform and understand that emotion, exploring where it comes from and why we shouldn't feel it.

The 26-year-old writer recently published a book of poems titled New American Best Friend and has another, yet unnamed, collection coming from Random House. Gatwood's video performances of "Ode to My Bitch Face" and "Manic Pixie Dream Girl" have more than three million collective views.

"I don't know that there's one way of existing as a poet right now." Olivia Gatwood tweet this

Seven Days caught up with the Boston-based writer the week before she embarks on her tour, which will take her across the United States.

SEVEN DAYS: A lot of people know you for "Ode to My Bitch Face." When did you write that?

OLIVIA GATWOOD: I wrote that about three years ago, after I was at a conference where I was performing alongside a lot of other acts that were also competing to be booked as college entertainment — magicians and comedians. There was a hypnotist, and I was having a conversation with him about how consent plays into hypnotism. Like men, especially, going into schools and hypnotizing young women to do silly things. It was just really weird to witness. And I was curious, what are the boundaries and how does consent play into that? So I asked him that question, and he didn't answer, but instead decided it would be a good time to be like, "Were you born with that bitch face, or did you get it over time?" Which does answer my question. I don't think consent plays into his act. So I went home and wrote that poem as a response to him.

OG: It's really weird. And you know what's interesting about it? When I asked that question, I was made to feel really crazy and dramatic by everyone that was there, mostly a bunch of male comics, hypnotists and magicians. Everyone acted like I was a buzzkill for asking that, and it got in my head. And, not long after I asked him that, an article came out about a divorce attorney [who] ... was hypnotizing women during sessions to assault them. I realized that my question is actually really logical and justified, because clearly it is being used to do violent things. And, not long after that, the same hypnotist that said I had a "bitch face" had assault allegations [brought] against him.

SD: That was three years ago. How has your poetry changed since then, or has it?

OG: My poetry has changed a lot. I think "Bitch Face" was the start of an era of writing. It was the first really intentional ode that I've written, and odes have since become a backbone to a lot of my work. The language and the rhythm in "Bitch Face" was a new style for me at that time, and I've since stuck to that. I had an opportunity to be really playful with my language — it's a really rhythmic poem.

And [it's] one of the first poems I wrote with the full intention of having it live both on paper and as performance. Because I was brought up in spoken word, most of my poems were written for a stage. [But] since ["Bitch Face"], all of my poems exist that way, and I'm intentional with all my poems and how they appear on a page. How they look and feel, and how a reader can interpret it their own way. It doesn't need to be listened to to make sense.

SD: I had a professor once tell me never to share poems on social media or on the internet, only in a "reputable" journal. How do you deal with that kind of old-guard thinking about the "right" venue for poems?

OG: I think, because I was raised in spoken word, I never was severely impacted by what I think is often a very elitist, hyper-literary, inaccessible poetry world. I was raised with the understanding that poetry is for everybody, and that poetry should be accessible, and it should be consumed widely. I grew up going to open mics at bars.

When you're raised in spoken word, you can feel not as good or not as smart as other writers. And I think that that idea, that spoken word is not as worthy as other poetry, is honestly rooted in classism and racism. Modern-day spoken word is predominantly [performed] by marginalized communities. So I think it's really easy for the white literary world to look at it and say, "That's not real poetry." I just was lucky it never truly impacted me.

It was something I had to consider, and for a while I had to grapple with, and I struggled with wanting to write poems that were taken seriously versus poems that were true to me. And then also [to] define what it means to be taken seriously. If my primary readership is teenage girls, does that mean my poems aren't serious? And if my poems aren't serious because of that, then what does that mean? What does that say about what we think of teenage girls?

Which is to say, I don't agree that your poetry shouldn't be on social media. You know? If you want to reserve some poems to be in journals, great. But some of the best-selling poets got their start on Tumblr [and] Instagram. I don't know that there's one way of existing as a poet right now.

SD: Your tour is called Alternate Universe Tour. Where did that title come from?

OG: I have a poem called "Alternate Universe in Which I Am Unfazed by the Men Who Do Not Love Me." And I wanted the title of the tour to be a reference to one of my poems, to kind of ground people who have been following my work and make them excited about coming. But I was also thinking, a lot of people come to poetry to feel validated and to feel seen and heard about things that have previously been ignored, or [that] they've been told they're crazy for feeling. I'm imagining that our show as an entity is an alternate universe where people can exist as themselves, wholly and unapologetically and free of shame. And, even for two hours in time, to feel like there are people in the world who believe them. I think that's a rare experience.

SD: You have a book coming out in 2019 called Who Are You Always Dressing Up For? Where did the title come from, and what can we expect from that?

SD: Why the decision to change it?

OG: It felt like the poem, the book, the manuscript was a reflection on true crime, and the way that true crime has sunk its way into my life and exacerbated a lot of my anxieties and fears. A lot of the book feels like it's about being looked at and watched, and how do you function under that? And so Who Are You Always Dressing Up For? felt thematically right. But, as I've been writing more, the book has almost doubled in length, and is much more heavily about true crime at this point. And so I thought the title wasn't quite provocative enough. I want the reader picking it up to know what they're walking into, which, frankly, is a lot of poems about dead girls. I need a title that says that somehow.

OG: There're podcasts, movies and TV shows and books — just the obsession with the death of girls. But it's a very specific kind of death and a specific kind of girl. The way we are always naming girls beautiful before we talk about how they died. I have a fraught relationship with it. I'm a heavy consumer of true crime, but I also recognize that it's deeply disturbed and really corrupt in how many depths it ignores. I wanted to grapple with that, so I wrote a book about it.

SD: That's a good way to do it. And it's probably good to warn people what they're heading into. My friend and I watch "Criminal Minds" together, and we talk about the paradox of watching this incredibly violent show as a method of relaxation.

OG: It's interesting to me that the biggest consumers of true crime are women. And, I think, there's a way — this is weird, but I think our main desire when consuming media is to see [ourselves] in it. A lot of women consume true crime because they see themselves in it, even if the version of themselves they see is murdered in a ditch. You see it and you're like, "That could me, or that could be my sister, my friend, and that man could be my ex-boyfriend or the dude I said no to at the bar." It's a really twisted way of looking for representation, but it's a phenomenon. It's insane.

SD: You call yourself a poet and an educator. Do you think your poetry is educational?

OG: I was an educator for a while. I don't primarily do that anymore, but I did do that for a long time.

I think most poetry is educational. I used my poetry in particular to teach students about sexual assault and consent and healthy relationships. So, consent, but also racism on campus and being a first-generation college student — these are all issues that colleges are afraid of and stay away from talking about in depth. Often the way that they do approach it is with a pamphlet, or a PowerPoint, or an assembly or a mass email that nobody clicks on.

Poetry is engaging and fun, and most spoken-word poems are three minutes. They're personal narratives. They're emotional. And I think that's how you teach people. You don't teach people by talking at them. You teach people by utilizing empathy, and encouraging them to practice their own empathy. So I think poetry is a fantastic educational tool in that way.