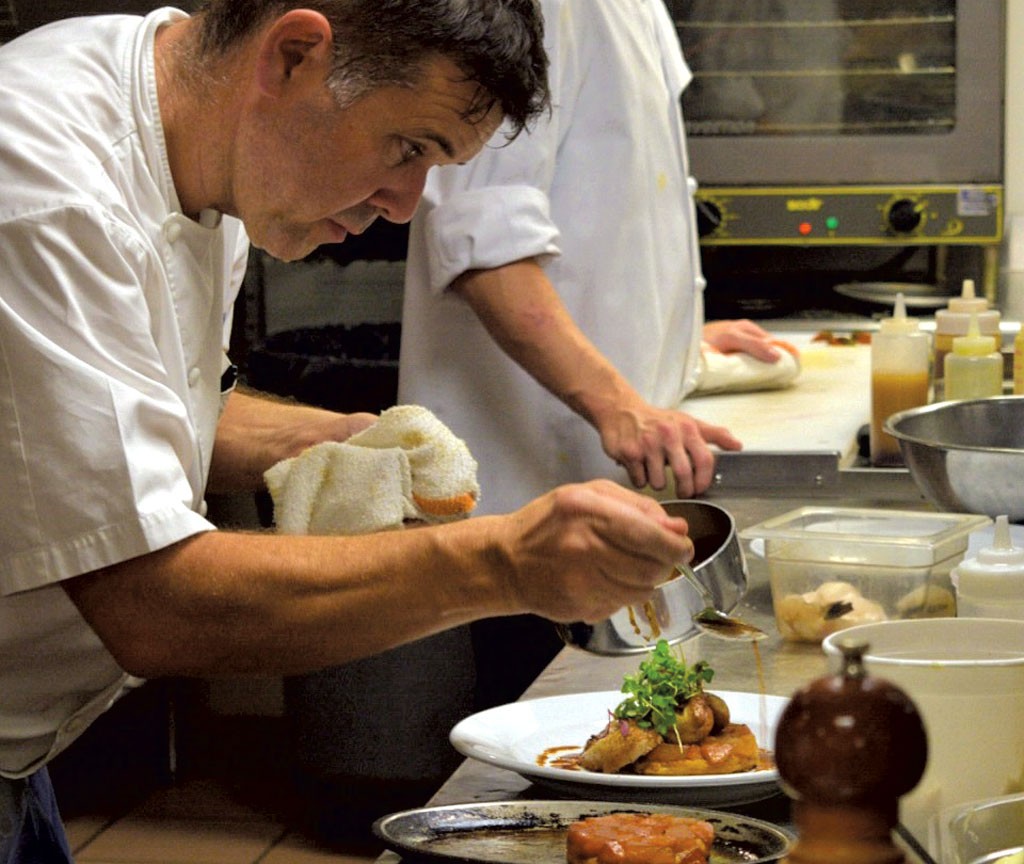 This past summer, L'Amante fans were devastated to learn that the downtown Burlington Italian restaurant would close in August after 12 years in business. But when owners Kevin and Kathi Cleary passed the torch to Herve Mahe, the French chef kept most of the L'Amante staff family together to open Bistro de Margot in its space.

That in-house staff eased the new chef's transition from his most recent position as chef at the Hilton Burlington's Mounted Cat. After minor renovations — Mahe reworked the lighting and painted, giving the space a clean, modern feel — the restaurant opened last week, serving unfettered bistro classics such as pork terrine with cornichon, onion compote and Dijon; Burgundy escargots in herbed butter; pan-roasted quail; and steak frites.

"I really feel like we are the only true French restaurant in town," Mahe says. That said, he's lightened the fare and added modern twists — for instance, citrus meringue crowns the chocolate mousse — and he uses local ingredients rather than imported ones.

On the drinks menu, several beers and a handful of craft cocktails join wines from the chef's native France — 10 or so by the glass and a full page of bottles, representing virtually all of France's wine-producing regions.

What about those sad L'Amante devotees? Many are eating their tears, Mahe says. "We had tons of great feedback from the L'Amante regulars; some of them have come back several times already. So that's phenomenal."

Winooski residents may have noticed an abrupt recent shake-up in the dining scene. On September 10, Thanh Pham and Bishnu Gurung unceremoniously closed their Dharshan Namaste Asian Deli at 212 Main Street. The pair say they're currently expanding their popular restaurant in Burlington's New North End into the other Winooski Main Street space that until recently was their Namaste Asian Market.

But 212 Main didn't remain empty for long. Alyssa Vigneault and Sudershan Adhikari opened the Spice Traders' Kitchen there on Wednesday, September 16. While their opening menu includes some holdover favorites from Dharshan Namaste, it's more squarely focused on food from Nepal, Burma and Adhikari's native Bhutan.

The new restaurateurs met when Adhikari moved to Vermont in 2012 from the Nepali refugee camp he had called home for two decades. Vigneault was working at the time as an employment counselor for the Vermont Refugee Resettlement Program.

At Spice Traders' Kitchen, the pair makes momos from scratch, along with potato-and-veggie-filled samosas. Curries are central to the entrée list. The Nepali tasting platter known as dal bhat includes a choice of curry with fried mixed veggies, dal, homemade yogurt and house pickles — all for $12.