Album Review: Bison, 'Get In' 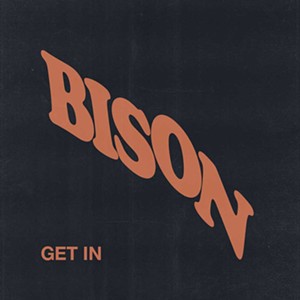 A brand-new pair of Converse Chuck Taylor All Stars stands out with its midnight-black canvas body, untarnished toe cap and pristine white laces. It's when the sneakers get a little dirty, though, that they really take on their style. On Burlington band Bison's new release Get In, the trio offers up a combination of funky disco beats and guitar-driven rock with moments that suggest they, too, will wear age and experience like a rock-and-roll patina.

Drummer Fabian Gaspero-Beckstrom, bass player K.C. Dressing and singer-guitarist Charlie Hill joined forces in 2014 as students at the University of Vermont and Community College of Vermont. The next year, they put out their debut EP PSB, a four-song introduction to the self-described disco punks.

Recorded at the Gnomehaus in Williston, the follow-up opens like a heist movie soundtrack with "Sealab." A drumbeat evoking the Shaft theme, combined with a straightforward guitar line, makes for an infectious number that will have dancing queens and rockers alike bobbing along. The lead single, "Everything You Say and Do," has the same genre-crossing effect.

"In a Fortnight" serves Kings of Leon vibes with its slow buildup and riff reminiscent of "Sex on Fire." A rock song clocking in at more than seven minutes could induce a "get over yourselves" eye roll, but in this one, the changes in tempo and mood tell a story that calls for every second.

Variations such as these provide the tie that binds most of the half dozen songs. "Contrast," a tune that implies Bison may have spent time with the same Talking Heads and Fela Kuti records that inspired Paramore's 2017 album, veers from a new-wave groove toward an echoey, hypnotizing and sinister dreamscape. Here, Dressing's unsparing bass is the tether that keeps the song from slipping into the ether.

The next track, "Pope Francis," takes the mood shift a step farther down the shoegaze rabbit hole, hinting that the 23-year-olds have a dark side — Hill even roughs up his voice with a Kurt Cobain rasp.

"It's my last chance to live an honest life," he sings in the album's lyrical and vocal standout, "Four Years." With a harrowing belt, the recent grad proclaims, "All I hear is attempts to make me change / Well, I hear myself screaming, 'I'm OK.'" Halfway through, the song speeds up, to dizzying effect — kind of like time after college.

While the band certainly sounds youthful and fresh on Get In, grunge lurks in the shadows of these songs, indicating that, like that aforementioned pair of Chucks, this already ear-catching band is only going to get more compelling with time.

Get In by Bison is available to stream at soundcloud.com/bisonvt. The band says cassette tapes are forthcoming.

Speaking of Bison, Get In

Album Review Bison Get In