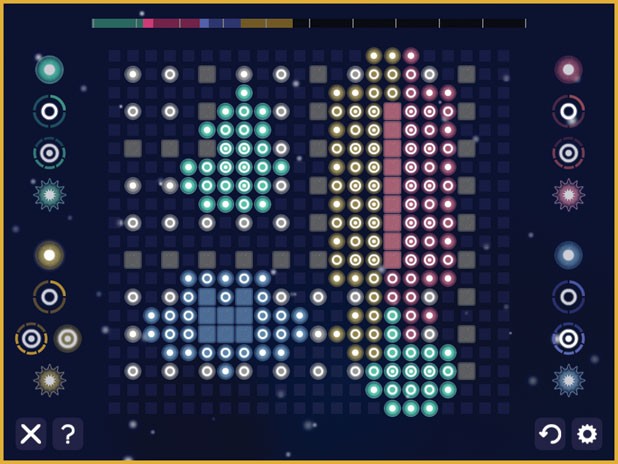 The ubiquity of smartphones and tablet computers has ushered in a massive boom in game playing. It seems that just about everyone, from toddlers to retirees, is crushing candy, running through temples or having words with friends.

The designers at Birnam Wood Games, a Burlington-based independent video-game developer, ironically want to take advantage of those gaming devices to bring back the golden age of board games. Pathogen, Birnam Wood’s latest title designed for iPad and PC, is a clever, attractive game that evokes the spirit of Othello, Go and Pente, which employ simple rules for capturing and claiming opponents’ tiles.

Growing up in Colorado, Bohn often played board games with his family at their kitchen table. “I wanted to create that feeling again — a digital board-game experience,” he says. Bohn envisions families and friends gathering around an iPad to play Pathogen just as they would gather around a Risk or Monopoly board. Up to four can play; solo players can compete against the game’s AI. There’s also an online mode in which players can be matched up randomly.

The game derives its name from the way disease makes its way through living tissue. The tiles in Pathogen are called “cells” — pulsating discs of various designs and colors. When a cell is placed next to or atop another cell, the second cell either “evolves” or gets “infected” to become a cell of a different type. The game’s objective is simple: to capture as much of the game board as possible.

Pathogen will be officially released in the App Store on Thursday, November 7. Bohn and Dibble — also 23 — are excited and nervous. They have a lot of faith in the game, but the downloadable video-game market is, as Dibble puts it, “immensely risky.”

A previous Birnam Wood title, Loc, is a clever puzzle game that challenges the player’s grasp of spatial relations. But it tanked — badly. “We didn’t have the mindset for how to market a game,” Bohn says. “We had a lot of trouble reaching out to the gaming press and the people who have a lot of influence.”

Dibble likens the video-game marketplace to that of publishing. “You can write the next Great American Novel in your bedroom, but if you don’t have the means to push it right…” To prevent history from repeating itself, the company has hooked up with Gameblyr, an independent game publisher.

The market is quirky in other ways, as well. Many people who are reluctant to pay for downloadable games will, if they get hooked on a particular title, shell out for additional in-game features. This so-called “freemium” model can be highly successful; Dibble and Bohn express reluctant admiration for the subtlety with which the wildly popular freemium game Candy Crush Saga encourages players to spend money. But, Dibble notes, “The psychology behind it is very manipulative.” Pathogen’s business model is simpler: Pay once to download the game and it’s yours.

As of Seven Days’ press time, reviews of Pathogen are still verboten: Gameblyr has issued a “press embargo” with the intention of preventing any leaks. Still, a few positive comments have popped up online, mostly from people who’ve played a demo version of the game at a convention. More impressively, Pathogen won a gaming contest at the Strasbourg European Fantastic Film Festival, and Best Online Game at this year’s MassDiGI Game Challenge.

Though prohibited from offering an official review, this player can say that Pathogen has serious addiction potential. It’s impossible to predict what one’s opponent will do beyond, perhaps, a single move, so the game turns into a kind of digital garden of delightfully forking paths.

One of Pathogen’s particularly nifty features is that a completed game can be replayed, move by move, and restarted from any point. Effectively, players can agree to “go back in time” to arrive at an entirely novel endpoint. Multiple gameplay modes, highly customizable rules and a level editor contribute to the game’s mind-boggling permutations.

Greg Bemis is an instructor in Champlain’s game-design program; he worked with Dibble, Bohn and Brand when they were students. In turn, the developers worked with students at their alma mater to get feedback on the game. Though Bemis admits to being “horrible” at Pathogen, he knows it as well as almost anyone.

Bemis relates a story about four students playing a demo version of the game. Three of them quickly adopted highly aggressive strategies, while the fourth sat back, observing. “At the exact moment that [the fourth player] needed to, he made a particular move that gave him 80 percent of the board,” Bemis recalls. “That’s a bit of a calling card of a good game: one that can keep players engaged all the way through ... If you keep playing in Pathogen,” he adds, “you can weasel out a victory if you see the right move at the right time. That is pretty fun.”

Pathogen will be available for download from Apple’s App Store on November 7. $2.99. pathogen.co, birnamwoodgames.com