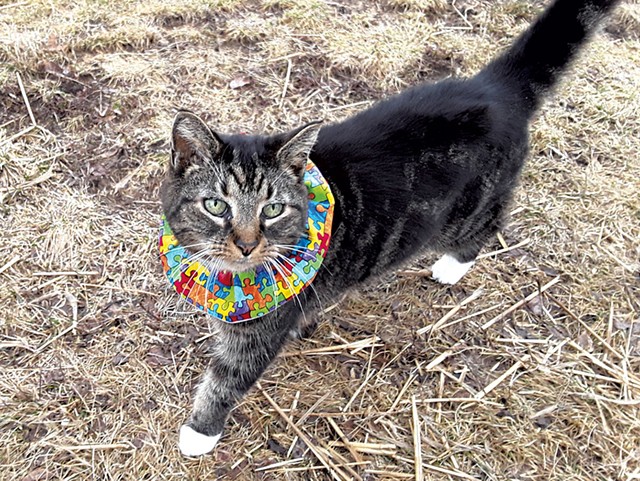 It all started with a murderous house cat. His name was George, and he was a skilled killer with an eye for birds. When Nancy Brennan, a bird-watcher, moved in with George and his owner, who would become Brennan's husband, she found George's hobby upsetting, especially when he dragged his prey into the house.

"It was awful," Brennan said. "I tried a couple different ways to stop him. I tried bells on his collar. I tried extra bells."

George's hunting prowess couldn't be hindered by a bell, and making him an indoor cat was not an option. Once cats are accustomed to going outdoors, Brennan said, it's extremely difficult to keep them inside. One day, George brought home a ruffed grouse, and an idea popped into Brennan's head: What if I make George more obvious?

She'd recently been reading about how songbirds, due to a unique eye structure, are extremely sensitive to bright colors. Human eyes contain three color receptors, but many types of birds have four, meaning they're seeing colors in ways we can't even imagine.

So Brennan went to her sewing machine and made George a collar out of brightly colored, patterned fabric, sort of like an Elizabethan ruff. Then she waited.

"At first, it was almost hard to believe that he had stopped," Brennan said, referring to the cat's hunting. But as the days went by, and then the weeks, she realized the collar was working. "It was such a difference, and [the reduction in kills] was so close to 100 percent for him that it was stunning," she said.

After about a year, during which George seemed to lose interest in hunting altogether but never showed any negative effects from the collar, Brennan thought it might be time to bring her innovation to the world. What about all the other cats? She asked herself. If I don't do this, who will? Birdsbesafe was born.

In Duxbury, Brennan and George were living out a dynamic that exists in millions of homes across the country. The U.S. has somewhere between 58 million and 94 million pet cats. Many of them are allowed to wander outside. And, for years, outdoor cats have been at the center of a roiling debate around the threat they pose to birds, many of which are already vulnerable to climate change and human encroachment into their habitat.

The cat-bird conflict has, inevitably, led to quite a bit of human-human conflict. On a local level, this often comes in the form of Front Porch Forum posts.

"Could you please put a bell and collar on your cat? There are nesting birds around my home that this long haired black cat is preying on, not to mention chipmunks," pleaded one poster in a Burlington neighborhood. "I know COVID has made birders out of many folks out there, so I hope this message finds some traction," wrote another, who said they'd been chasing cats away from a downy woodpecker nest outside their home.

"My product addresses the actual truth that many people let their cats outdoors." Nancy Brennan tweet this

On a larger scale, cats versus birds became the subject of a lawsuit in New York, where a colony of 30 cats living in a state park threatened the endangered piping plovers that nested there. The cat caretakers insisted the felines were harmless. The case was settled in 2018, and the cats were removed from the park.

"Personally, I think cats should stay indoors," Brennan said. "But I don't control 100 million cats. So my product addresses the actual truth that many people let their cats outdoors."

Brennan's business started small in 2009. She sewed all the collars herself. In 2015, a St. Lawrence University professor published a field study that found Brennan's collars reduced the birds caught by the average cat by 87 percent. That finding came with a lot of publicity, and Birdsbesafe took off. Brennan now contracts out her sewing within the U.S. Word of mouth accounts for a lot of the company's success, she said, but there are organizations such as the American Bird Conservancy that also recommend the collars.

Brennan, now in her sixties, is coy about how many collars she's sold, but she said the company has been her full-time job since 2015. She's kept careful track of customer responses since the beginning and believes she has fine-tuned which fabric colors and patterns are most effective.

Birdsbesafe collars don't lose their effectiveness over time, Brennan said. In fact, songbirds can get better at spotting them and send warning calls to other birds in the area. She said the collars don't seem to prevent cats from catching mice and other rodents.

In the future, Brennan hopes to see her product make inroads in Europe, where even more cats tend to spend time outside, she said. Bird-focused organizations already recommend the collar in France and Belgium.

"There are ever-expanding opportunities, and my goal is to help protect the most birds possible," she said.

George, the original inspiration for the business, has long since passed away. Brennan has a new cat now. She keeps her feline friend indoors.