Bill Would Require Vermont Hunters to Eat, Skin or Mount Prey — Except Coyotes

The idea behind the bill seemed simple enough: Require hunters to use the animals they kill. Shoot a deer; eat the meat. Trap a coyote; sell the pelt. Bag a bobcat; mount it for your man cave.

A "wanton waste" law, in essence, would prohibit hunters from killing animals for no reason. Dozens of states already have such laws, and many hunting groups support them.

So, in 2018, when animal rights groups proposed such a ban for Vermont, activists were optimistic that lawmakers would get behind an effort that, according to a University of Vermont poll, enjoyed strong public support.

"We thought it would be easy," recalled Brenna Galdenzi, the cofounder and president of Stowe-based Protect Our Wildlife.

"This is a very big step forward for Vermont's wildlife and ethical hunting." Rep. Amy Sheldon tweet this

Instead, the proposal went nowhere, stalled by contentious debates between animal rights advocates and hunters. But now, nearly four years later, lawmakers are closing in on that most elusive of quarry — a compromise. The House Committee on Natural Resources, Fish and Wildlife approved a bill on Tuesday that would require most game animals taken in the state to be used for food or fur.

"This is a very big step forward for Vermont's wildlife and ethical hunting," said Rep. Amy Sheldon (D-Middlebury), who sponsored the bill and chairs the committee.

With one exception: The bill, H.411, would exempt coyote hunters from the wanton waste rules. That means people who shoot Eastern coyotes — which hunters can do day or night, all year, without limit — may continue to do so, with no obligation to put their furry carcasses to any use. Many say they shoot the animals to control their numbers and to keep them wary of humans.

Trappers, however, would still be required to use the coyotes and all other fur-bearing animals they catch and kill. Trapping is highly regulated, with a season that starts in late October and runs through December. The fur during those months is denser and more valuable, so most trappers can sell the pelts of the coyotes they kill.

If the agreement holds — the bill still requires approval by the full House, Senate and governor — it would mark a breakthrough in one of the longest and most polarizing wildlife management debates in the state.

The apparent détente also reflects the reality that the wanton waste bill isn't the only wildlife-related legislation of consequence under consideration this session.

The Senate is digging into two other bills that would protect wildlife. S.281 would ban the hunting of coyotes with hounds, while S.201 would ban the use of leghold traps for all game animals. A third bill, S.129, would open up the Fish & Wildlife Board to nonhunters and limit its powers. The Vermont Fish & Wildlife Department opposes all three.

The bills got a robust airing last week at a two-hour virtual public hearing hosted by the Senate Committee on Natural Resources and Energy. Jennifer Kittell of Eden told senators that she grew up in a hunting family and feels that the bills would modernize the state's wildlife management.

"Coyote hounding is nothing more than a barbaric form of dogfighting," Kittell said.

Chris Bradley, president of the Vermont Federation of Sportsmen's Clubs, called that an "exceedingly gross exaggeration" meant to "inflame and mislead the public."

Canis latrans were first documented in Vermont in the 1940s, though they've now established themselves throughout the Northeast. Fish & Wildlife Department publications refer to coyotes as "one of the least understood and most maligned creatures of the state." 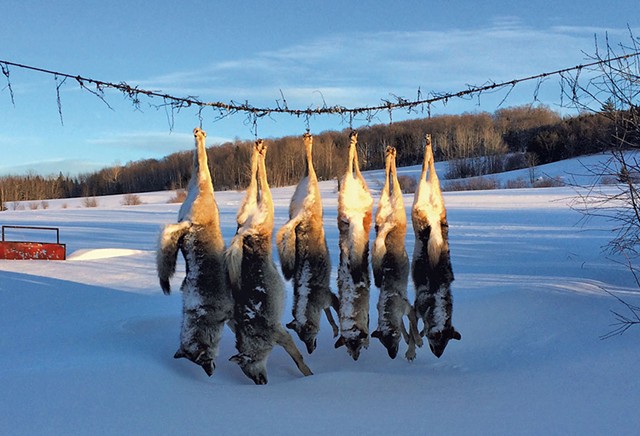 Many rural Vermonters regard coyotes as nuisance predators that threaten livestock and desirable game species such as deer. State laws have reflected that view, with an open season that allows coyotes to be killed without limits.

In recent decades, images of coyote carcasses strung up like laundry or stacked like cordwood as a result of hunting contests have stoked public outrage. Animal rights groups convinced the legislature to ban those killing sprees in 2018. But calls to further pare back the hunting have only intensified.

Rep. Sheldon said she realized that lawmakers needed to step in with a wanton waste bill after the Fish & Wildlife Board refused to take up the issue in 2018, even after a retired game warden implored its members to do so. Hunters objected strongly to any such rules, arguing that requiring them to use coyotes threatened their right to hunt the animals year-round.

The Fish & Wildlife Department supports wanton waste regulations in theory, according to Kim Royar, the department's longtime furbearer biologist. But to be effective and enforceable, a single bill banning the waste of game animals must cover a lot of ground.

"You're really trying to say, 'Look, utilize the animal that you take, in the best way that you possibly can.' But that's hard to put into legislation," she said.

Past proposals have tried — and failed — to prevent wasteful practices without also "making people outlaws when they are still using most of the animal," Royar said. For example, some people have interpreted drafts of wanton waste bills as requiring hunters to use or consume all edible parts of an animal.

"If somebody eats the tongue or the eyeballs or the liver, does that mean everybody has to eat the tongue, the eyeballs and the liver to meet that regulation?" Royar asked.

The answer is no. The current language merely calls for an animal to be "processed for food" and says the "inedible or unusable parts or portions" can be discarded. Alternatively, the animal can be "processed for its fur, hide or feathers" or "used for taxidermy." State game wardens would be responsible for enforcement.

The bill contains a number of exemptions, such as when an animal was wounded and couldn't be retrieved, was sick, or was taken "in defense of property." It also clarifies that "generally accepted hunting or trapping practices," such as field dressing a kill and leaving the guts behind, are not considered waste.

There have been some tense moments in the Committee on Natural Resources, Fish and Wildlife in recent weeks as members worked toward a compromise.

The original bill would not have exempted coyotes, which hunting organizations took as an attempt to create a "de facto season" on the animals, said Mike Covey, president of the Vermont Traditions Coalition. The animals' pelts are only valuable in the winter, when their fur is thicker, Covey said, giving hunters no practical way to use coyotes killed in the warmer months.

His pro-hunting group found an ally in Rep. Leland Morgan (R-Milton), who told his colleagues last month that many people felt that the original bill was "deceptive" and likely to make them distrustful of lawmakers.

"It just doesn't seem open and honest and fair to create a season on coyotes in this manner," Morgan argued.

The fraught discussions have come as the new Fish & Wildlife commissioner, Chris Herrick, is settling into the gig. Appointed last October, he raised eyebrows at a committee meeting in late January when he proposed adding "fertilizer" to the list of approved uses for killed animals.

Sheldon seemed stunned by the suggestion and asked Herrick to repeat himself. At another point, Sheldon challenged Herrick's characterization that there was no season on coyote hunting.

"An open season, to me, implies there's a season," Sheldon said.

At a subsequent meeting in late January, Rep. Tom Terenzini (R-Rutland) took umbrage at Sheldon's treatment of Herrick, and things got testy.

"I just wish that the next time he comes in, you could be a little more civil to him," Terenzini told Sheldon.

After an awkward silence, Rep. Seth Bongartz (D-Manchester) asked, "Is that a joke?"

"No, that's not a joke! OK?" Terenzini barked in retort.

Not all are pleased with the compromise. Rep. James McCullough (D-Williston) said he strongly supported coyotes being fully covered by the bill but was resigned to their removal in the face of opposition from Herrick.

"Hopefully, a wiser steward and more effective steward in the future can take care of the coyote issues," McCullough said.

Charles Storrow, a lobbyist hired by the Vermont Wildlife Coalition, also expressed displeasure with the compromise.

"If we're going to have a wanton waste bill that basically stands for the principle that if you shoot a wild animal, you either have to use it for its food, pelt or taxidermy, then that should apply to all animals," Storrow said.

In a telling concession, however, Storrow said his group was "not going to let perfect be the enemy of good" and urged the legislation to proceed regardless. "This bill has a lot of value," Storrow said.

Sheldon said the bill is stronger now that it has the support of Commissioner Herrick. She said she hoped the Fish & Wildlife Board would take up limits on coyote hunting given the abundant evidence of their value to the ecosystem, including in reducing rodent populations.

Galdenzi was disappointed by the carve-out for coyotes but took comfort knowing that the bill would still apply to all other game animals in the state. If it became law, it would be one of the strongest in the nation.

"If we say we don't want this bill at all, then all of those bobcats and foxes and river otters and beavers and all those other animals won't have to be utilized," she said.

Galdenzi thinks that even if the imperfect bill wouldn't have a significant impact on how coyotes are hunted today, it could eventually have a profound, positive effect on the state's hunting culture.

"This will hopefully change the lens through which we view those animals that we hunt and trap," she said, "and help teach young people that if you're going to hunt or trap something, you should do it for a reason."

The original print version of this article was headlined "Coyote Loophole? | Bill would require Vermont hunters to eat, skin or mount prey — except for Canis latrans"