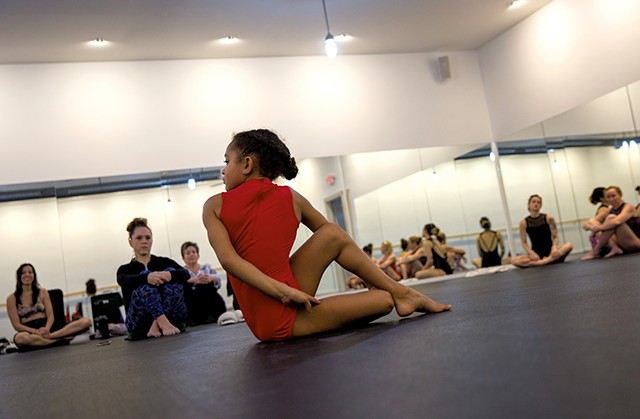 Nica Thomas stands in front of a small audience and a long mirror and begins her routine. She stretches fluidly from side to side, forward and backward. Seemingly boneless, she bends and twists her spine, balances on her hands and pretzels one leg around her neck, the other around an arm.

Nica is 8 years old. With the advantage of youth and gymnastics training, she makes flexibility look effortless. Today she's rehearsing her Bikram moves, and it's clear the Edmunds Elementary School third grader has the skills, poise and confidence to compete.

Yes, that's right: compete. Nica will be one of eight participants representing Vermont in the Northeast Super Regional Yoga Asana Championships this Saturday, March 10, in South Burlington. The other seven are women ranging in age from 28 to 53. All of them practice at Queen City Bikram Yoga.

Marla Thomas — Nica's mom — is the studio's founder and owner, and she's responsible for bringing the regional competition to Vermont for the first time. While previous regionals were New England-wide events, this "super" comp will also include competitors from New York, New Jersey, Pennsylvania and Delaware.

The competitions are produced by LA-based USA Yoga Federation, a national nonprofit launched by Rajashree Choudhury and "dedicated to developing and promoting Yoga Asana as a sport," according to its website. USA Yoga is part of an international movement that began, like yoga itself, in India.

Hearing the words "competitive yoga" for the first time, many people react the same way: "Isn't that an oxymoron?" Thomas suggests that reflex implies a negative judgment — one that she dismisses.

While USA Yoga has been producing regional and national competitions for just 15 years, its Indian roots go back centuries. But Thomas acknowledges that the concept of yoga competition is still unfamiliar to many, including yogis who follow other traditions. "I think it's been looked at as a Bikram thing," she says.

Janet Carscadden, owner of Evolution Physical Therapy & Yoga in Burlington, echoes that thought. "It's more in the Bikram world — they've taken yoga into the competitive world," she says. "For a lot of people in yoga, it's not about that; it's a very spiritual practice."

Carscadden, who is also a physical therapist, has been practicing yoga since 1995 and opened Evolution in 2006. Regarding this week's competition in Vermont, she comments, "It's nothing that I've ever been exposed to. But I think, like anything else, there are evolutions and branches [of yoga]."

"Though, on an obvious level, the idea of a yoga competition seems counterintuitive, these participants have trained as hard as many professional athletes and don't deserve to be shamed or criticized for their efforts and choices," observes Sofi Dillof, cofounder of Laughing River Yoga in Burlington and an advanced certified Jivamukti yoga instructor. "For every person who feels triggered or turned off by the idea of a yoga competition, there will be another who is inspired."

For her part, Thomas believes "it's our nature to be competitive." She notes that many yogis — herself included — are or have been competitive athletes; the practice has helped them heal injuries and correct alignment. While practitioners are always "competing with themselves," she says, this event allows participants to show what they have been able to accomplish. 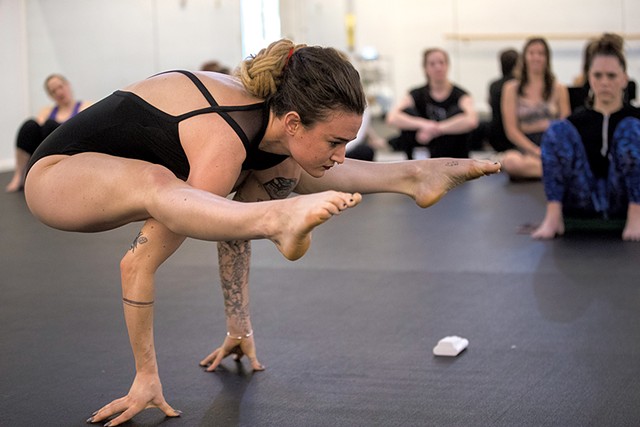 Thomas, now 45, began practicing yoga at age 28. She has participated in four U.S. yoga competitions and been an official timer for 12 years. Now she prefers the role of coach. "I want to be a good role model, to share what helps me," Thomas says. "I feel like my place on the Earth is to help and inspire others."

Referring to the treatment of yoga as spectator sport, she adds, "People are interested in it — do you know how many people watch yoga videos on YouTube? It's fun to watch."

A Bikram class typically uses 26 postures, each sustained for 10 seconds to a minute, and is conducted in a hot room — 105 degrees, with 40 percent humidity. But the competition, Thomas says, "is a different animal."

For starters, the South Burlington High School auditorium will not be excessively warm. Each competitor will present a routine consisting of four compulsory poses and two optionals in three minutes or less. There are age categories — 7 to 11, 12 to 17, 18 to 49 and 50-plus — and three levels of difficulty in the poses. The scoring system is similar to that of, say, Olympic gymnastics. Overall, the purpose of the competition is to demonstrate strength, balance and flexibility.

Heather Leibenguth, 38, will be a first-time competitor this weekend. A hair stylist and aesthetician at O'Briens Salon, she took her first Bikram class in 2003 and has been practicing "solidly" for two and a half years. "I like the structure of the class," Leibenguth says. "At the end, I feel great." In addition to affecting her body, she adds, the practice "has helped a lot with my inner struggles, the 'bad tapes.' It's a personal inner journey."

Karen Krieger, 47, is also competing for the first time. A Burlington rep for Colorado-based Coalition Snow, which makes skis and snowboards for women, she's been doing yoga for 22 years and, she says, has "been a competitive athlete all my life."

But then, Krieger notes grimly, "I wrecked my back in a ski accident." Practicing Bikram helped her to strengthen the muscles around a bulging disc and straighten her spine so that "I got it to pop back," she says.

Among the Vermonters competing this weekend, Alex Sturges is the most experienced; this will be her third time onstage. Now 28, she's been practicing for eight years and teaching for nearly a year and a half at Queen City Bikram. As a "veteran," she's also playing a support role for her fellow participants.

"The best part of the competition," Sturges says, "is that the winning is really in the preparation. You work so hard, and you really deepen your practice.

"The second part I love [about the competition] is all the people I meet," she continues. "You're meeting people from all over the country that you have so much in common with — they've really become my yoga tribe."

Thomas says her goal for this Saturday's event is to see her competitors "do their routines in under three minutes and have a positive experience." If the comp provides a supportive community for its participants, she suggests, it's also an energy boost for the audience.

"No one's seen anything like this in Vermont," Thomas enthuses. "I dare anyone not to be inspired."

The original print version of this article was headlined "Ready, Set, Flow"