Bikers in the Buff 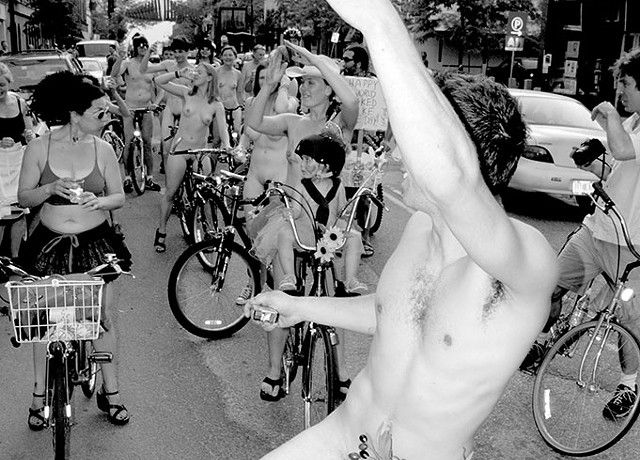 June 11 was World Naked Bike Ride Day, and a group of 20 or so brave bikers commemorated it by cycling nude through the streets of Burlington. According to worldnakedbikeride.org, riders in more than 50 cities worldwide pedaled to protest reliance on fossil fuels and to celebrate "the power and individuality of our bodies."

Burlington's contingent assembled between 6 and 7 p.m. in the parking lot of Greener Pastures and Junktiques on North Winooski Avenue. Husband-and-wife organizers Adrian and Lina Tans are residents of Cambridge, Mass., who were in town visiting friends for the weekend. They promoted the protest by passing out fliers at local coffeehouses, and word traveled fast.

While all of the cyclists supported the cause, most seemed to enjoy simply providing some spicy street theater. Michael Nedell, a long-haired slam poet, author and former presidential candidate, painted silver stars on his nipples and wrapped himself in red, white and blue cords of tinsel for the ride. He pedaled a rusty red Schwinn, modified for the occasion. He added a basket to carry his clothes, "just in case."