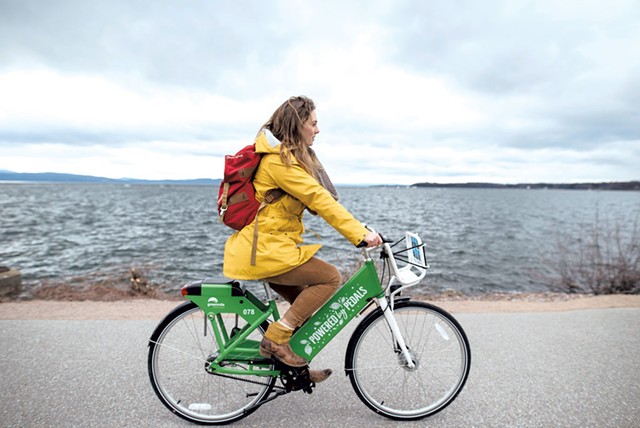 Burlington, South Burlington and Winooski voters who want to head to the polls to cast a ballot in person are in luck, transportation-wise.

Two-wheeled trips through Greenride Bikeshare will be free all day on November 3, according to Gotcha, the South Carolina-based company that operates the alternative transportation system.

"We want everyone to be able to get access to the polls," said Caroline Passe, the company's director of public relations. "There's no cost to vote, so why not offer free transportation, too?"

With backing from local corporate sponsors and a cadre of alternative transportation advocates, Gotcha launched its Burlington-area Greenride system in April 2018. That same year, the company unveiled its free Roll to the Polls program for the midterm elections, citing a stat that indicated 3 percent of registered voters nationwide didn't cast a ballot in 2016 because of "transportation problems."

To participate this Election Day, a rider must first create an account. There are currently 105 bikes at 15 hub locations, including the Burlington International Airport, downtown Winooski, Champlain College and the University Mall.

Promo code VOTE2020 will release a bike for an unlimited amount of time from 7 a.m. to 8 p.m. Each comes with a lock, so you can secure it outside while you vote.

The bigger question is how many people will need to get to the polls at all. As of Tuesday, 163,784 Vermont voters had already returned their mail-in ballots, more than half the total number of votes cast in the 2016 election.

Passe said she's confident people will take advantage of the free rides, no matter the conditions on Election Day.

The original print version of this article was headlined "Poll Position"