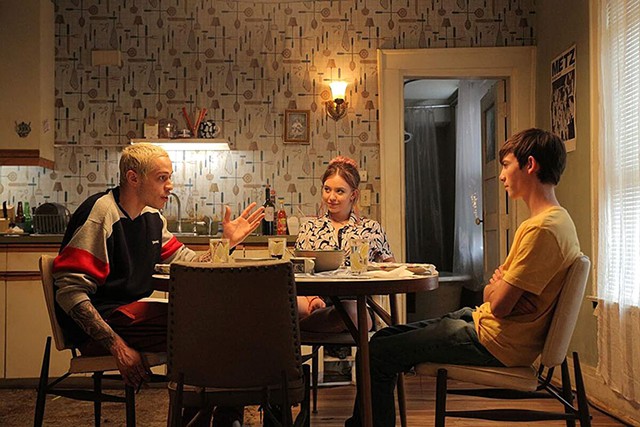 Well, the words "home movie" have suddenly taken on new meaning, haven't they? Theater chains have fought against the generational shift to streaming for years, but the coronavirus would appear to have settled that contest for the foreseeable future, and Hollywood has wasted minimal time in pivoting to digital. While the release of tentpoles such as No Time to Die and A Quiet Place Part II has been postponed indefinitely, a growing number of smaller titles (The Invisible Man, Emma. and The Hunt among them) is being rerouted by studios to video on demand and major streaming services. For the time being, home is where the film fun is.

A case in point: Pete Davidson's Sundance hit Big Time Adolescence. Originally slated for theatrical release on March 20, the critically acclaimed coming-of-age comedy is now playing on Hulu instead. You've seen the "Saturday Night Live" star on your home screen before but, believe me, never quite like this. There's more to Davidson than the sketches and headlines have let on.

The enormously entertaining feature debut from writer-director Jason Orley tells the story of a suburban 16-year-old, Mo (Griffin Gluck), whose best bud happens to be his sister's ex-boyfriend. That's Davidson, turning in his first starring appearance as Zeke. Mo liked hanging out with the older couple and, when they broke up, simply continued hanging out with Zeke. Six years Mo's senior, Zeke is such a stoner and arrested-development case that he's oblivious to the age difference.

He's also surprisingly good-hearted and guileless, which is against type for the comic but lends the proceedings an irresistible amiability. The mismatched pair spends much of their time at Zeke's place, a bottle-strewn bro pad left to him by his grandmother. They're usually in the company of Zeke's hard-partying slacker pals (one of whom, Nick, is played by rapper Machine Gun Kelly) and his current girlfriend, Holly (Sydney Sweeney). I kept expecting Seth Rogen to walk in.

The plot is really set in motion, though, back at school. A classmate named Stacey (Thomas Barbusca) overhears Mo hurling in a bathroom stall one fateful morning. "I'm just a little hung over, dude," Mo explains. The kid's in awe: "On a Thursday? Dope!" (The dialogue is exceptionally clever.) Faster than he can say "McLovin," Mo has accepted an invitation to a popular senior's party, extended on condition that he bring the booze. That's right — it's Superbad's central narrative mechanism updated and retooled for a new generation.

And I do mean retooled. As in Superbad, our high school-age hero has a crush on a smart, brassy fellow student. Sophie (Oona Laurence) is initially bemused by Mo's approach — he actually phones her to say hi, for example, instead of texting. Of course, Mo's approach is actually Zeke's approach. Zeke is playing Cyrano and feeding his protégé moves that worked for him in the dark ages. That happy ending shared by Jonah Hill and Emma Stone? Let's just say Mo and Sophie's ending is more reimagining than remake.

And remember how the cops crashed the party in Superbad? They crash it here, too, but with an uproarious, almost Dadaist twist. You have to see it. Which is what I'm saying, I suppose, about this gem of a film across the board. With a cast this endearing and writing this dope, you owe it to yourself to revisit the agony and the ecstasy of adolescence. Big time.