The smell coming off the brownish mounds is so foul, it makes your eyes water.

If it abides, that stench could become the most distinctive feature of the Green Mountain Compost facility in Williston and potentially disrupt the state's ambitious plan to reduce the amount of food waste going to Vermont landfills.

The stink at the compost facility on Redmond Road, the largest in the state, emerged last summer as it received increasing amounts of organic waste because of an expansive recycling law passed in 2012. A neighbor who lives a mile away on Mountain View Road expressed concern to the operators of the facility about strong smells wafting her way day and night.

Tom Moreau, general manager of the Chittenden Solid Waste District, which runs the facility, agreed that something putrid was in the air. "Late August, it smelled like blue cheese," Moreau said. "We all went, 'What the frick?'"

He added, "We can't be a bad neighbor. Nobody should be sitting home at eight o'clock at night or five in the morning and smelling it."

But the odor has persisted. Last Monday, a visitor to the big operation whiffed the stench immediately, especially near the huge piles of fresh food scraps in one of the covered bays.

Tests are under way to determine the source, which Moreau said could be a large volume of powdered creamer and other dairy-based food waste that came from Keurig Green Mountain starting last winter.

If that's the cause, he said, the problem should go away. Moreau stopped accepting flavorings, sugars and milk-based products from the Waterbury-based company in August after preliminary tests of the rank material showed high fatty-acid content. Keurig officials confirmed that the dairy product is now going to farms as "cattle feed."

Meanwhile, the old Keurig material is working its way through the compost operation and should graduate to a less smelly phase within the next few weeks. 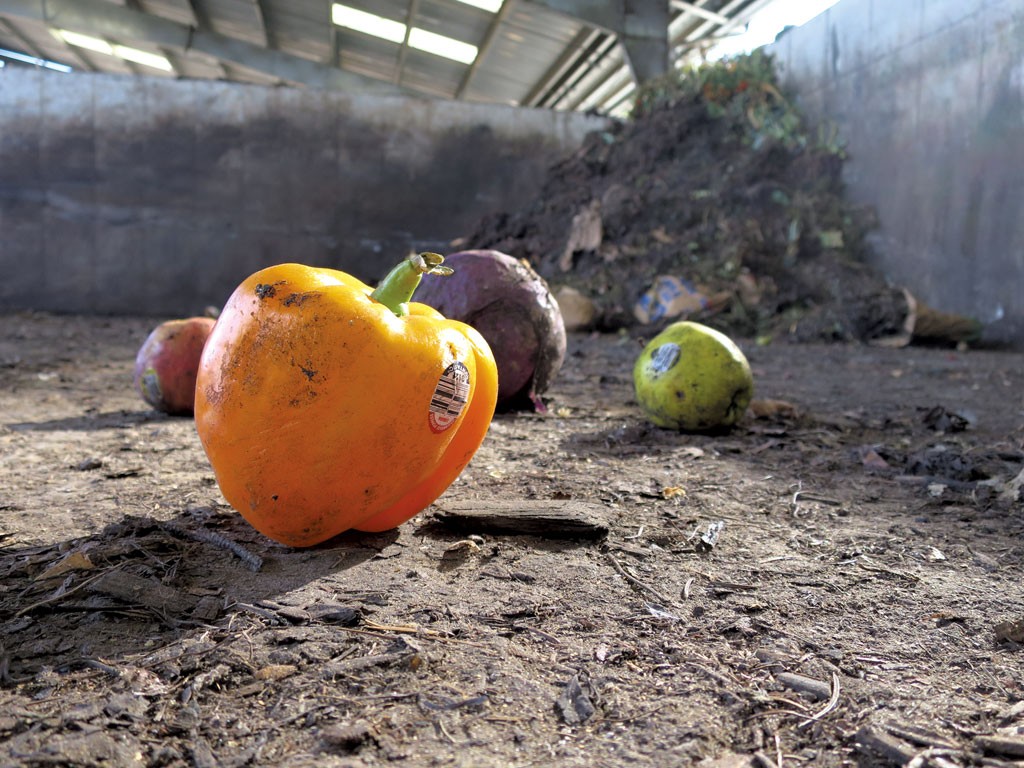 If the odor doesn't go away, Moreau reasoned, it could be a permanent byproduct of managing increasing quantities of compost: In the fiscal year that ended on June 30, Green Mountain Compost accepted 23 percent more, from 3,577 tons to 4,413. "It doesn't go up linearly," he said of the corresponding stench. "It goes up exponentially."

Some bad smells are to be expected, especially when the fresh food scraps are dropped off. But the current level is unprecedented, according to Moreau, noting compostable plastic bags may be contributing to the problem. More consumers are using the biodegradable bags, which take the "yuck" factor out of composting. But it appears that when compost is sealed in the bags, the rotting smell intensifies and it's extra odiferous when the bags are punched open in the compost mixing process.

If any one of those variables is causing the stench, Green Mountain Compost might have to cap the volume of food scraps at or below current levels. That would likely force the State of Vermont to rethink its approach to large-scale composting.

His advice to state officials: "You guys need to know, if Chittenden can't do this, I think other people are going to have some problems."

He put Seven Days in touch with the unhappy neighbor, but Diana Miranowicz did not respond to a request for comment.

Vermont has big plans when it comes to the food we don't eat. A universal recycling law, Act 148, passed in 2012, mandates that all food waste must stop going to landfills by 2020. The law gradually steps up composting requirements to reach that goal, starting with the largest generators of food waste.

Last year, it required those who produce 104 tons or more annually — two tons per week — to compost. This year, on July 1, the law kicked in on generators of one ton per week. In 2017, haulers must offer food-scrap collection to residential customers, and by 2020 all scraps, including those from homes, will be banned from landfills. One exception: Residents who compost most of their food waste in their backyards will be allowed to send meat remnants, bones and skin to the landfill with other trash.

The push to reduce trash in Vermont appears to be working. During the past 10 years, the amount of trash that Chittenden County sends to the landfill each year dropped from 145,906 tons to 116,658. Diverting organic matter could help further, but if they're not going to the landfill, those food scraps still have to go somewhere.

The Green Mountain facility, which cost $2.3 million to build, opened four years ago. It replaced a compost facility in Burlington's Intervale, which had to close as a result of various concerns, including liquid runoff near the Winooski River.

The Williston operation was designed to avoid such problems. Sitting on a concrete pad, a large shed hosts covered bays for compost at different stages. The floors of the bays are slotted, so air can be blown into the material to speed composting. A webbing of wire outside the bays keeps seagulls out, so they don't litter the area with droppings or carry off chicken bones. Pipes collect runoff to keep it from leaching into the ground.

The conversion of food scraps into rich, black soil mix takes about six or seven weeks. Wood chips and debris are added to the mix to hasten the process, during which the compost must reach temperatures of 131 degrees Fahrenheit or higher for three days in order to kill pathogens. Bacteria helps the piles get to that temperature naturally, even in the dead of winter. Digital probes measuring the temperature stick up from the piles, so employees have answers to their questions about the pile: Does it need more aeration or moisture, or less?

The compost cures in black mountains at one end of the property for six to nine months before it is bagged and sold to spread on gardens, lawns and fields.

The odor problem is not the first challenge the Williston operation has faced. In 2012, it unwittingly sold tainted compost that withered the plants it was meant to nourish. Tests revealed that herbicide-laced horse manure was the culprit. The facility suspended compost sales for 20 months and now accepts less manure and tests each incoming batch. But compost sales have still not recovered.

That's one reason CSWD had to subsidize the facility last year with roughly $500,000 from fees it levies on waste and recycling collection. The board that runs the publicly owned district hopes someday disposal fees and increased compost sales will make the operation more self-sustaining.

Whatever happens on Redmond Road, Vermont will need much more composting capacity to realize its waste-management goals. And it won't come cheap. Vermont must invest an estimated $45.5 million to implement the universal recycling law by 2020, according to a state-commissioned study. Most of that money, about $29.6 million, would go to build infrastructure to manage food waste. Funding ideas include a five-cent fee on plastic and paper bags and a new solid-waste service tax on trash, food scraps and recyclables at collection or drop-off.

Of course, compost can make money, too, just sitting there. About 18 Vermont dairy farms have anaerobic digesters that capture methane gas from manure lagoons to generate electricity. Green Mountain Power is proposing to build one in St. Albans Town that would process food waste, manure and byproducts from at least three dairy farms that milk 2,000 cows. GMP's Champlain Community Biodigester Project would produce enough power to light 492 homes.

Moreau and his board have reached out to GMP to discuss partnering on a biodigester in Chittenden County.

Meanwhile, the compost law is slowly changing the operations of restaurants, grocery stores and other big producers of food waste. Many big grocery stores and institutions were already composting. But the law is pushing them to donate more items to food banks and farms. It is also spurring businesses to assess how they will respond to composting requirements, according to Michele Morris, assistant waste-reduction manager at CSWD.

At least 100 restaurants in Chittenden County are now composting on-site or sending food waste to Williston, and more than 100 different types of businesses or institutions are doing the same, Morris said. Some are receptive to her outreach about the new law; others, less so.

"Some people are just sort of philosophically opposed to the government telling them that they need to be doing anything with their business," she said. "Then there are some people who just need to be reassured and shown that this can work in their facility, especially when you're talking downtown Burlington. Spaces are tight."

Morris works with businesses to route unused food or food waste to the best sources, whether it's a pig trough or the huge bays at Green Mountain Compost. Numerous breweries are routing grain waste to hog farms, Morris said.

The law encourages business owners and residents to find the best practices. "There's a lot of ways, so to speak, to skin this zucchini," Morris said.