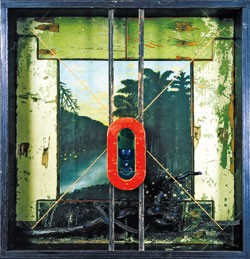 On a breezy summer morning, the doors of the BigTown Gallery in Rochester stand open, welcoming curious visitors to explore the treasures within. “Hey Joe: An Homage to Joseph Cornell” is an ambitious exhibition neatly packed into the small space of the gallery. Curated by State University of New York at Plattsburgh art professor W. David Powell, the exhibition features pieces by 10 artists, including Powell, who have been influenced by assemblage artist Joseph Cornell (1903-1972).

Among the works displayed are those of photographer, art historian and Middlebury College professor Kirsten Hoving, who published a book on Cornell in 2009. Hoving also wrote an essay for the exhibition catalog in which she discusses Cornell’s M.O. “His method was one of piling up associations to create visual poems that exceed the sum of the individual collage and assemblage elements,” she writes, “and the fact that many artists today continue to explore similar creative methods demonstrates the power of this approach to materials.”

Hoving also writes of the nostalgia that pervades Cornell’s works: “For Cornell, nostalgia combined fascination, obsession and longing for the unattainable — and it fueled his art.”

The diverse artists included in the show share an aesthetic preference for the ephemera of bygone times and a virtuosic dedication to assemblage that makes each relation of paper to paper and object to object seem profound. That associative sense links these artists directly with “Joe,” calling to mind Cornell’s subtle and evocative Cornell boxes in which he collected fragments, mementos and bits of text, sometimes including mysterious commentaries on the objects.

Todd Bartel’s “Garden Study (Surrender to Vastness),” an artwork shaped like a square topped by a tall, narrow triangle, faces visitors entering the gallery. Framed in heavy, dark wood, the work seems almost like a displaced piece of furniture. Inside it, attached to the backing, are typewritten texts by several authors about “the sublime.”

The second half of the page is redacted with correction fluid, obscuring the text. Below the paper, an antique stereoscope card features photographs of a woman standing on the edge of Yosemite’s Glacier Point. The glass that covers these vignettes is itself part of the work: An orderly line of seeds fills a narrow gap between the glass panes, running down the piece’s center. The seeds seem suspended, echoing the suspension of these fragments in time. Toward the base of the tall triangle, a small, oval painting of two icebergs sits demurely beneath the line of seeds. Like Cornell’s work, Bartel’s piece hums with poetic associations.

Five works by the widely esteemed collage artist and Dartmouth College art professor emeritus Varujan Boghosian seem, at first glance, less elaborate than some other works in the exhibition. A closer viewing reveals his pieces to be exquisitely composed and infused with vivid, wry intelligence. In “Amsterdam,” a folded card emerges from a yellowed envelope, its richly hued, geometric print flaked with age. The seemingly simple found object gains mystery from the postmark, “Wien 41,” and the recipient’s name, “Herre F. Gosse” in Amsterdam. The envelope holds a number of brightly ornamented stamps. Loosed from a fountain pen, the sweeping letters handwritten on it evoke a tumultuous former time.

Evidence of Boghosian’s hand in this work is slight. What has he changed? What has he found? What has he invented? The work is both an artifact and an artwork, traversing the boundary between those categories as easily as a moment becomes a memory. Like Cornell, Boghosian collects things — especially papers — and, again like Cornell, he uses a careful hand to give ephemera new relevance and potency.

Rosamond Purcell trades less in nostalgia than in a view of the past shot through with critical insight. Her works in the exhibition often include scenes of war and its strange commemorations. In “Luck of the Draw,” the primary visual element is a photograph of bombs falling from a plane. Below, a town bordered by rivers emits a thick plume of smoke. A ripped, mottled blue playing card pasted on the image’s upper left corner shows a spade — a shape that echoes that of the bombs. The image joins the chance of card games and the violence of war.

Across a large wall in the back of the gallery, artist and curator W. David Powell’s series, “General Home Dynamics,” combines imagery from Cold War-era children’s books, manuals and science textbooks. His flawlessly constructed collages meld the deadpan didactics of those midcentury sources with his own flair for absurdity in works that continually challenge the viewer’s conventional associations.

In “General Home Dynamics, A Messenger from the Depot,” a man seems to run into the frame, a plank of wood in his hand. A wooden home covered with concentric circles awaits him. In rectangular sections above the scene, diagrams of chemical reactions and machinery hum beneath an illustration of some sort of optical device, a bird on a branch and a rudimentary awl. These seeming non sequiturs, joined on the page, elicit novel connections.

The bird sitting in a tree seems to watch an awl spin into wood — a processed version of its perch. The optical machine floats over a diagram of a man who looks into a cylindrical contraption. The chemical reactions, overlaid with horizontal arrows, echo the wooden planks that compose the house, which relate back to the wood and awl in the topmost frame. All the pieces seem absurd in isolation, yet their interconnection suggests a certain logic.

In this homage, seemingly unrelated objects and images sing together; the diverse works resonate poetically like items in a Cornell box. The individual works are extraordinary alone, but their combinations are profound.