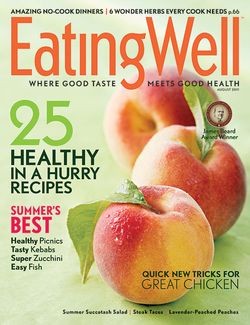 Sleepy Charlotte was the epicenter of a media coup this week. Publishing giant Meredith Corporation snapped up EatingWell Media Group, the thriving company that has “lived” and prospered in the bucolic lakeside community for the last two decades.

Meredith reaches 75 million mostly female consumers monthly via a roster of magazines including Family Circle, Better Homes and Gardens, Fitness and Ladies’ Home Journal, as well as its websites and broadcast efforts. Just today, Meredith launched recipe.com, a website and magazine aggregating 20,000 recipes aimed primarily at its middle-class “mom on the go” demographic. Earlier this month, however, the company did some downsizing when it laid off 75 employees and closed its website ReadyMade.com.

EW told its employees about the sale three weeks ago, says Lisa Gosselin, EW’s editorial director. Now the question on everyone’s mind is whether EatingWell will stay in Vermont. Gosselin expects the company isn’t going anywhere, at least geographically. “I think they [Meredith] recognize the value of the people here, and that this is a very strong team,” she says. “Vermont is so much a part of our brand. I don’t think we would have been the same if we hadn’t started here.”

For the moment, Meredith — which is based in Des Moines, Ia., with offices in New York — plans to increase EatingWell magazine’s circulation from its current 350,000 to 500,000 by January, and to pump up the group’s digital presence.

“The resources they have compared to the resources we had as owners are starkly different. I expect they will do some stupendous things,” says Cairn G. Cross of Shelburne’s Fresh Tracks Capital, former chair of EatingWell’s now-defunct board. The deal has “been my life for the last six weeks,” Cross adds, as Meredith combed over every facet of the business. The terms of the deal have not been made public.

Cross says Meredith approached EatingWell’s board a few months ago. “[Meredith] saw [EatingWell] as a premier brand deserving of the unique and distinctive voice that they didn’t have,” he says.

Patrick Taylor, Meredith’s vice president of communications, explains that Meredith was attracted to the company because EW, with its focus on healthy eating, has the potential to unite and anchor the various tendrils of Meredith’s food business. “In our research, there will continue to be growing intersection between heath and wellness, and we felt this was a great intersection for us in terms of our audience,” he says. “We have a lot of content on food, and we have one of the largest food databases out there, but we didn’t really have a destination brand, if you will.”

EW currently draws about 40 percent of its profits from its print magazine. The rest come from its web efforts and custom publishing projects that repurpose vetted recipes and content for supermarkets, private firms and the military.

“We positioned this company to be able to attract a good, strong suitor to take it beyond where we could,” says Cross. Still, he admits, “It’s a company that we loved being a part of. They have a great mission and a fun culture. I’ll miss dropping in on the test kitchen.”

Like Gosselin, Cross speculates that EatingWell will remain in Vermont. “There’s no guarantees in life,” he says, but notes that the new buyer has “midwestern rural roots.” “I think, culturally, it’s a good fit,” Cross concludes. “[Meredith has] acquired and run remote companies in the past. They realize the core team is here and that content is a product of the people creating it.”