Elizabeth Kleinfeldt was picking up snacks for her kids at the Hannaford supermarket in Williston last December when two strangers approached. The young women asked Kleinfeldt her age, an opening question she found odd. Their next was even more personal: Do you believe in God?

Kleinfeldt admitted she's not a religious person, so the women enlightened her. God is female, one said, and without God, there would be no Adam or Eve.

"I was like, Oh, another one of these people," Kleinfeldt recalled. "I was thinking she was going to hand me a pamphlet or something."

No literature was exchanged. Instead, the women asked Kleinfeldt for her phone number and urged her to come to a Bible study and cheesecake tasting that day at a house in Winooski. They never mentioned the name of their church, but Kleinfeldt begrudgingly gave up her digits.

"I honestly just gave it to her to try and get away," Kleinfeldt said. "They kept telling me that today was the last day, that they were going back to New York and how I really needed to be there. They were just really pushy — really pushy."

So pushy, in fact, that a manager, who recognized the women from a previous incident that day, came over and ran them out of the store. They left without a fight, manager Jessica Hollenbeck told Seven Days last week — and haven't been back.

Unsettled by the incident, Kleinfeldt called the cops to report what had happened, unwittingly joining a growing sorority of spooked shoppers. Over the past few months, women browsing at big-box stores and malls in South Burlington, Williston and Colchester have reported similar encounters to police. Some mentioned men lurking nearby, sparking a rumor that "Bible study" was in fact a ruse to lure young women into the sex trade.

Others have swapped stories online, sharing details that are so similar, it's as if the solicitors had been reading from a shared script.

"If this happens to you — definitely call your local police department and make a report!" one woman wrote in a popular private Facebook group called Sensi-Babeington. She continued, "Who knows what's actually happening, but better safe than sorry!"

The people behind the efforts, according to several local police departments, aren't sex traffickers. They're members of the World Mission Society Church of God, a nondenominational Christian organization that claims to have 2.7 million registered members with more than 7,000 churches in 175 countries. Founded in South Korea in 1964, the church believes in "God the Father" and "God the Mother," a living Korean woman named Zahng Gil-jah. Its founder, Ahn Sahng-hong, died in 1985 and was considered by church members to be the second coming of Jesus Christ.

The first United States congregation formed in 1996, and dozens more sprang up. Victor Lozada joined in 2005 and recently became the group's de facto spokesperson, most often deployed to tamp down fears over what he calls a Facebook-fueled hoax. From Oregon to Oklahoma, Jacksonville to Louisville, and on college campuses in between, Church of God members' persistent proselytizing has sparked sex trafficking social media panics.

In an interview last week, Lozada, a traveling missionary, bemoaned the "editorial freedom that allows people to post without doing any research.

"Once you post it on social media, then it must be true," he said. "It's a cliché saying, but unfortunately that's how society is nowadays."

Lozada worries that the online speculation could turn into something more sinister in real life. Some church members have received death threats or had their personal information and photos posted online, according to Lozada.

"Our biggest fear is some fringe actor taking it upon himself to become the savior of getting rid of the human traffickers, and [he] comes to our church and tries something stupid," Lozada said.

Local police in Vermont have investigated shoppers' reports and found nothing amiss.

"We talked to our intelligence center through the state," Colchester Police Chief Doug Allen said, referring to a Vermont Department of Public Safety resource that helps police share information. "They saw similar complaints at other intelligence centers across the country, and from everything we were able to piece together, it was not [a sex trafficking scheme]. It was a kind of aggressive religious group." 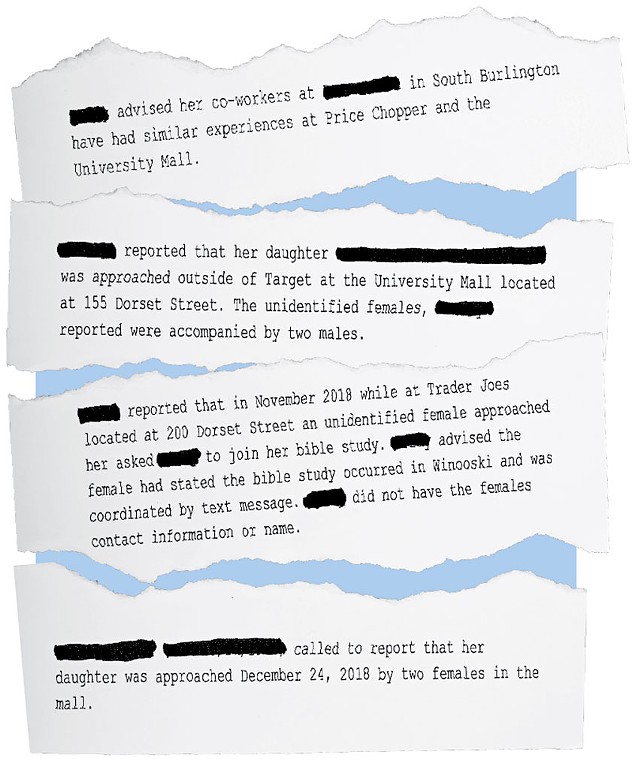 Police say the church members' tactics are not criminal, though private businesses are within their rights to bar solicitors from their property. In light of the incidents, South Burlington police issued a press release last month absolving the church of wrongdoing but warning shoppers to be aware of their surroundings. Allen echoed the sentiment.

"If you're approached by someone you don't know, be cautious about what you're giving out, and check on the legitimacy of who you're talking to," he told Seven Days.

According to Lozada, there's been no active attempt to establish a church in Vermont, which is one of the least religious states in the country. Rather, Alex Billing and his wife, both church members, moved to Winooski about two years ago and decided to share their beliefs. Billing told Seven Days that he was surprised that local church efforts had only recently garnered attention.

The closest existing church is in New Windsor, N.Y., so Billing often hosts Bible study sessions at his home.

"If you look at the origins of Christianity, there were no brick-and-mortar churches for almost 300 years," Lozada said. "All of the disciples studied the Bible from house to house. Any Christian organization that doesn't have an actual church building can hold a Bible study in a house."

The group proudly boasts of its commitment to volunteerism. Lozada noted that the church has earned commendations from governments in places such as the UK, Canada, Peru and New Zealand. Pictures on the group's website show members around the world wearing yellow shirts while cleaning up after natural disasters or giving blood.

Lozada attributed the assertive preaching as the product of a few overzealous acolytes, some of whom were visiting Vermont from out-of-state. And despite the rampant rumors, he said the church had no intention of discouraging its members from approaching people in public places.

"We don't use the word 'recruiting.' We're not trying to gain members or sign them up for the military," Lozada said. "We just preach the gospel and deliver a message. If people want to hear it, they want to hear it. If they don't want to hear it, we just leave them alone."

Some former members ascribe that preaching to much darker motives. In 2013, Michele Colon filed suit in New Jersey, alleging that the church was actually a mind-control doomsday cult. She and six other former members told People magazine in 2015 that leaders pressured them to recruit "young Caucasians who appeared wealthy" at malls and on college campuses.

"Fear and guilt — that is what fuels this cult," Colon told People. "They fill you with this fear that the world is going to end at any moment and you feel guilty for not doing enough good before the end comes."

A Superior Court of New Jersey judge later dismissed the suit, concluding the First Amendment protected the church against the claims.

But a second suit, filed in 2014 and also in New Jersey, is still wending its way through federal district court. Michelle Ramirez contends that the church is a "profit-making global enterprise" that pressured her to donate more than $100,000 and led her to "believe that terrible things would happen to her if she used the Internet to conduct research on World Mission New Jersey," the suit alleges.

"The reason World Mission New Jersey did that was to prevent Plaintiff from learning truthful information about World Mission that would have persuaded her to leave World Mission," it reads. The case is scheduled for a status conference on March 12.

A "Today" show segment about the church in 2016 included an interview with the parents of one woman who cut off contact with her relatives after joining. In an interview with journalist Ronan Farrow, Colon, the plaintiff in the 2013 suit, contended that the church siphoned off its members' life savings.

"People are separating themselves from their families," she said. "They're quitting school. They're emptying out their pensions to donate the money to the church, because what do you need a pension and a 401k for if the world is going to end soon?"

Lozada, along with several church leaders, was named as a defendant in both suits. He denied the claims and noted that "the same three or four people" have spoken out against the church. He also took issue with the C-word.

"If you look at the history of religion, every major religion was labeled as a cult at one point," Lozada said. "It's just a word that's very easy to apply to something you don't know or you don't understand."

Burlington resident Kathryn Thompson considers herself well versed in world religions, but she'd never heard of "God the Mother" before two women approached her in December at a Shaw's supermarket in Colchester. Like the women who approached Kleinfeldt, the believers invited Thompson to a Bible study and cheesecake tasting in Winooski.

Thompson didn't go and later told Seven Days that she was put off by the recruiting method. She recounted her parents' own experience starting a new church in Ferrisburgh several years ago. They'd invite potential members to meet in a public place, Thompson said, and would not preach to unwitting strangers in a grocery store.

Lozada, for his part, was unfazed by the frosty feedback. If enough Vermonters like the church's message, he said, it would establish a congregation here.

"When it comes to matters of faith, people have different views and different opinions," Lozada said. "That's what makes this country amazing."