When Doma Thapa arrived in Vermont in 2012, she had a high school diploma in hand but wasn't sure she'd find a job. A year later, she told her distant relative Chandra Pokhrel, "Uncle, I want to open my own store."

Now in her twenties, the Bhutanese woman grew up in a refugee camp in Nepal. She attended cosmetology courses in that country and in India, then ran a small beauty shop in a market just minutes from the camp.

In Vermont, Thapa's first job was at a soap factory. But later positions at beauty shops in Burlington Town Center and University Mall nurtured her desire to become an entrepreneur. Late last year, when Pokhrel, co-owner of Burlington Employment Agency, bought the building at 1 Intervale Avenue in the Old North End, he offered Thapa the opportunity to open her own shop.

Today, Thapa's Threading Beauty Studio is one of half a dozen or so aesthetics shops run by Bhutanese women in the greater Burlington area. Since the first families from that community resettled in Vermont in 2008, the Bhutanese have made their mark on the local landscape with restaurants and clothing and grocery stores. So it's not surprising to see them making inroads in this area, too, said Ashley Michelle Fowler of Mercy Connections.

Fowler is the nonprofit's communications and development associate and an instructor in the Women's Small Business Program. She sees the Bhutanese women's endeavors in the context of two decades of waves of immigration in Vermont. "What we see time and time again is that each refugee population from these different cultures tends to have an entrepreneurial bent, and they each take a different approach," Fowler said.

"When the Bosnians first came in the '90s ... we started seeing more European restaurants," Fowler continued. "When the Vietnamese came, we saw an increase in nail salons and Vietnamese food shops and Asian markets." Likewise, women from various African countries have begun making products and selling them at farmers markets, she said.

"It's a big responsibility owning a business," said Chandra Guragai, a Bhutanese woman who purchased a nail salon in Essex and reopened it last September as Creative Nails & Eyebrow Threading. For Thapa and Guragai, also in her twenties, it made sense to capitalize on previously acquired skills to establish a stable career. Both cited having more control over their working hours as key to their choice of self-employment. "I feel like this [studio] is like my house," said Thapa.

Because she is not certified in Vermont as a cosmetologist, Thapa currently offers only eyebrow threading, a skill she learned when she was 11. The ancient hair removal technique, an alternative to plucking and waxing, originated in Asia.

During a recent interview, Thapa began the process of threading a customer's eyebrows by holding one end of a spool of cotton thread in her mouth. She used both hands to double and twist the thread to form a taut bow-tie shape. Next, she rapidly rolled the twisted center back and forth across her customer's eyebrow, pulling sections of hair from the follicles.

Another minute passed before Thapa spoke again. "OK, you want to see the difference?"

"Oh, nice!" Jones exclaimed as she checked out her reflection in the mirror. Thapa smiled knowingly.

Although the Bhutanese woman is happy to have her own business, "My dream is to be a cosmetologist," Thapa said. She'd like to fill the empty black shelves in the lilac interior of her shop with cosmetics.

But she lacks the necessary certification. (The State of Vermont requires no certification for eyebrow threading.) "Sometimes I feel very frustrated in the United States," Thapa lamented. "I have skill, but I don't have license. If I'm in Nepal, I can do this and that ... Here, I need license for everything. 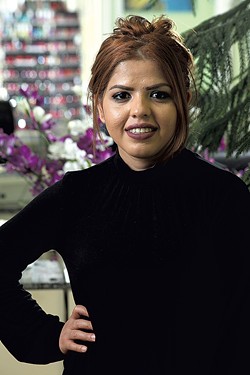 Like Thapa, Guragai took a cosmetology course in Nepal, but she also gained Vermont certification through the Center for Technology in Essex. Her high school guidance counselor, she said, advised her to enroll, helping her nail down her postgraduation plans.

Selena LeClair, admissions director at the O'Briens Aveda Institute, said she has seen an increase in the number of foreign-born cosmetology students over the past two years. The short duration of the course and its tuition — substantially cheaper than a college education — make cosmetology an attractive career option, she said.

"Entrepreneurship is definitely trending," said Carmen Tall, director of the Women's Small Business Program at Mercy Connections. "[It] maximizes strength, minimizes weaknesses." Although the nonprofit hasn't seen a greater number of former refugees enrolling in the program over the years, Tall said some had attended her Introduction to Self-Employment class.

New American entrepreneurs such as Thapa face the challenge of navigating institutions in a new culture. Although she's proficient in English, she needed Pokhrel's help when she started her business. "So many paperwork," she recalled.

"The language of business is complex," said Fowler of Mercy Connections. Even U.S.-born entrepreneurs need help deciphering the jargon, she noted.

And new arrivals may depend on their social networks, such as relatives who are entrepreneurs themselves, instead of approaching organizations like Mercy. Thapa said she faces more hurdles in her business because she lacks the assistance of her husband, who remains in Nepal.

Such problems are familiar to Jennifer Tran, a Vietnamese single mother who opened her own nail salon in 2005, when she was in her mid-thirties. The language barrier was formidable, she said: "Learning to speak English was very difficult, and the culture [is] different." But the nail technician made "a lot American friends," who helped her with the paperwork. Today she's the owner of Allure Salon in South Burlington.

Like Thapa, Tran worked for other business owners before she decided to set up her own shop. Also like her younger Bhutanese peer, she wasn't a novice entrepreneur when she arrived in the U.S. in 2000. Before immigrating to Vermont, Tran worked at her father's company. Today, her daughter, Ly, helps her at the shop and looks set to inherit the business.

"It's easy for me," the younger Tran said — her mother laboriously established a regular customer base.

The early years were challenging, Jennifer Tran said. She worked long hours with few customers. Although she bought advertisements in newspapers, the most effective marketing tool, she discovered, was word of mouth.

These days, Burlington's Bhutanese entrepreneurs have found creative ways to attract new customers, including social media and public events. Guragai has volunteered her skills at the First Congregational Church of Essex Junction and at a fashion show organized by the Vermont Refugee Resettlement Program. The congregants and models were her walking billboards, and she handed out her business cards at both events.

"It's better to see many people in one place," said Guragai's husband, Dharma Adhikari. "If we focus on Nepali [people], we won't grow at all."

Similarly, Thapa is working on building a more diverse customer base. The first step will be refurbishing her studio to improve the experience for clients. Some are shy about having passersby see them getting their chins, upper lips and sideburns threaded, said Thapa, who plans to install curtains for privacy. She also hopes to sell clothing at her shop to boost pedestrian traffic.

Thapa's aim, once her business is successful, is to become an employer herself. One thing that won't change is her mission: "I want to make everybody beautiful."