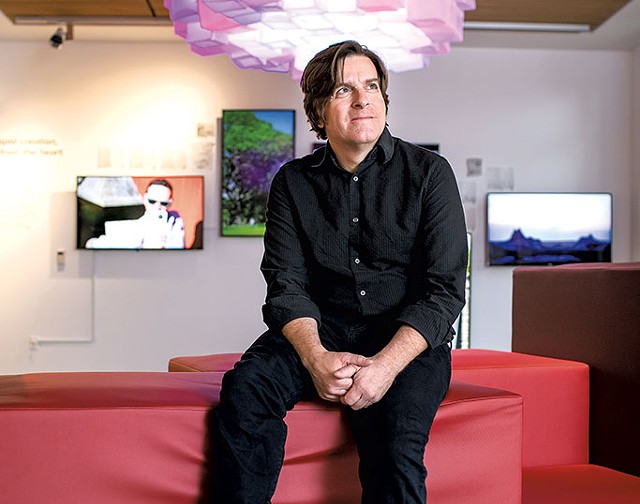 Chris Thompson is the art curator for the whole of Champlain College. But until this semester, the college had no dedicated gallery space. So, for a year, he operated like a curatorial Banksy, commandeering the odd blank wall or atrium around campus for brief installations of art and sculpture.

Now Thompson has an operational hub: the Champlain College Art Gallery, which opened upstairs in the new glass-fronted Center for Communication & Creative Media in August. The space consists of two open-sided rooms facing each other across a broad hallway. One, a windowless exhibition room, can be closed with a security gate. The other is the windowed Gallery Lounge, whose cushioned modular ottomans are always open to students.

Since the space went live, Thompson, a rapid talker with shaggy hair that occasionally gets stuck behind his glasses, has been feverishly productive. He and his assistant curator, senior Sabrina Parker, have mounted 14 exhibits in the past three months. Thompson created Parker's work-study position in a moment of need while he was still a "roving curator." The help comes in handy: The curators change up one or both gallery rooms "every two or three weeks," Thompson says.

At the time of Seven Days' visit, the gallery held a fairly traditional exhibit titled "Bound Together," curated by Parker, who also works as a gallery docent and event coordinator at Burlington City Arts. On display were the Saint John's Bible — a hand-calligraphed and -illuminated Bible commissioned by the Minnesota-based Benedictine order and completed in 2011 — and select handmade books designed and bound by students using similar techniques.

Across the hall, the lounge held two digital installations. "Pixel Cloud," on display through next semester, is a hanging cluster of paper cubes, made from white coffee filters and straws and illuminated from within by LED lights that change colors. The Cloud is a student "data visualization" project led by CCM professor Ken Howell. The installation's colors register the emotions of tweets that students send the work's Twitter account on an ongoing basis.

On the lounge's walls, "Projecting West," now dismantled, looped on several screens, video-documenting the nightly outdoor light installations that two alums, Michael Ackerman and Craig Winslow, made during a two-week road trip across the country.

On that visit, Thompson pointed out that one room exhibited a display of "ephemeral stops," while the other featured "a book which should last 1,000 years."

That comment hints at the range of curatorial freedom Thompson enjoys. Though his budget is "really tight," he says, "I can pick any artist around the world." Some are performance artists; the gallery is as likely to host events as exhibits. Thompson often consults with faculty and students to learn who is currently storming the technology and design worlds — the combination of which is the college's main strength.

"I ask them who's doing cool stuff. I'm always interested in what's going on on the fringes," he enthuses.

One gallery happening that emerged from those campus conversations was a visit from Steve Roggenbuck. The Maine-based twentysomething is a Twitter-inspired poet whose quirky YouTube videos have earned him rock-star fame and an invitation to perform at this year's New Museum Triennial in New York City. Roggenbuck was Champlain's artist-in-residence for a couple of weeks, living in the cottage below Perry Hall, creating new work and visiting classes. Thompson was stunned to see 80 students show up for the young poet's final performance, he says.

Students and faculty in Champlain's increasingly well-known gaming program led Thompson to Squinky, an indie video-game designer interested in gender issues who prefers to be referred to with the pronoun "they." Squinky recently designed a popular game with a transgender protagonist, but the designer remains on the creative fringes of an industry whose products are ever more formulaic and profit-driven, according to recent assessments in the Economist and elsewhere. Squinky's visit was one of Thompson's ongoing attempts to shake up students' thinking using art.

"It's important to be culturally curious, and sometimes you have to make that unavoidable for students," Thompson notes with a smile, gesturing at the space. The gallery and lounge are strategically placed along a "thoroughfare" that links the new building's gaming classrooms, writing professors' offices, conference rooms and a campus store.

Thompson's interest in sparking creativity is evident far down his résumé, which has consistently bridged the technology and art divide. After spending seven years as manager of multimedia systems and then advanced technology at Burlington design firm Jager Di Paolo Kemp, Thompson became an artist, working in encaustics; the chief curator at BCA Center for four years; and an adjunct professor of digital art at the University of Vermont.

While pursuing his MFA in emergent media at Champlain, from 2012 to 2014, Thompson helped cofound both the downtown Burlington maker space known as Generator and Champlain College's maker space, the MakerLab.

Howell, Thompson's MFA adviser, recalls that Thompson wrote his thesis on "what actually drives creativity." The maker spaces "dovetailed" with that pursuit, he says.

Thompson has a flair for the practical, Howell observes, a "radical pragmatism" — a quality that he used to work out the MakerLab's architectural layout, equipment and business model with the help of a fellowship. The 1,000-square-foot facility, which opened in 2014, occupies part of the first floor of the college's Pine Street building and contains tools such as a 3D printer, laser cutter and large-format printer.

Thompson used that printer to reproduce a digital drawing by 2015 alum Lisa Barber on two-story adhesive strips. He then mounted the piece in a stairwell of the CCM building.

Thompson also designed Generator's layout and operational details. A dozen individuals made the maker space come together, but "Chris was really influential," recalls Doreen Kraft. She's a Generator board member and executive director of Burlington City Arts, one of the collaborating institutions, with Champlain and UVM, that brought the project into being.

As a curator, Thompson continues to impress both these mentors. "He's always finding new ways to invent the [gallery] space," says Howell. "It's not just the thing on display but the meaning behind the work: He identifies the core of the work, and the space reflects that."

When Kraft attended the August opening of the gallery, she was surprised to see work by individuals she didn't know were artists. One was photographer and Champlain president Donald Laackman, to whose office Thompson reports.

The director is not surprised, however, at the exposure Thompson is giving to digital art. "He's really a pioneer," Kraft says. At BCA, Thompson curated the 2009 show "Game (Life): Video Games in Contemporary Art," which was "groundbreaking" at the time, she recalls. "There had been no exposure of video games in an art context in Vermont before that."

Kraft, who just returned from Art Basel Miami Beach, sees a "tremendous cross-fertilization" of genres happening in the art world today, largely facilitated by artists' easy access to digital technology. But not much purely digital work is shown at the large art fairs, she notes, because spaces are so expensive to rent. Commercial galleries shy away from digital art, too, according to Thompson, because "they haven't found a way to monetize it" — or preserve it for posterity.

Thompson isn't fettered by such restrictions. He will continue to introduce disruptive and challenging ideas with upcoming gallery events such as a January appearance by the young Vermont-based classical composer Matt LaRocca. A recording of LaRocca's symphony Arctic Voices will play in the gallery, enclosed by a fourth wall Thompson will build, while four projectors fill the room with photographs the composer took during a sailing trip around the Arctic.

At the same time, in the Gallery Lounge, Thompson will again unsettle the gaming community — and the community at large — this time with an exhibit of games by Paolo Pedercini. The Italian-born artist, who will be in town as part of Generator's Big Maker speaker series, designs "radical games against the tyranny of entertainment."

"Art is not just something to hang on the walls," declares Thompson. "It's about exploring the culture and asking the big questions of our time. Art is the best way to do that."

The Champlain College Art Gallery is open to the public Monday through Friday, 10 a.m. to 5 p.m., except during college breaks. champlain.edu