Last year, I wrote a Kids VT piece about movies with cool role models for girls. When my editor suggested a similar article for boys, I initially thought, Why bother? While girls are often reduced to playing love interest or sidekick, boys have no trouble finding flattering images of themselves on screen. The vast majority of Hollywood flicks released each summer revolve around a boy (or overgrown boy-man) doing awesome stuff. Harry Potter, Spiderman, Transformers, The Lord of the Rings, the Marvel Comics series, most animated films ... they're all about boys' journeys, though they may appeal to girls, too.

Superheroes still dominate our screens. Yet it's not always easy for parents to find movies that spotlight "super heroes" — that is, boy characters who learn to make the most of their smarts and their empathy as well as their karate chop.

Sure, there are TV shows and movies that purport to teach boys about the importance of caring and sharing. But adventure and wisecracking appeal to most kids more than sermons about good citizenship. Think back to your childhood. Which had a greater impact on you: the original Star Wars trilogy, or the "ABC Afterschool Specials" designed to teach you something?

Still, all that laser blasting would have felt a little empty without the quieter moments when Yoda imparted his wisdom and Luke confronted his dark side. With that in mind, I've compiled a short list of movies about "super heroes" — boy characters who do cool stuff and learn something in the process.

This list isn't meant to be comprehensive; I've included some obscure choices and omitted some examples everyone knows (such as the Harry Potter movies). I've also classified the films by type of journey. The important thing to remember is that fun movies don't have to be junk food — they can combine an action-packed sugar rush with a little mental and moral fiber.

A Christmas Story (1983, PG): Nine-year-old Ralphie wants a BB gun for Christmas. His mom says he'll shoot his eye out. Everyone who grew up in the '80s knows what ensues. The movie gently mocks Ralphie's action-packed fantasies while depicting his parents as fallible, too.

Fantastic Mr. Fox (2009, PG): Another movie where family life is actually pretty cool. Still, son Ash feels overshadowed by his chicken-thieving father's derring-do — and you might, too, if your dad had George Clooney's voice. The smart verbal humor of this stop-motion animation is best for preteens and up.

The Incredibles (2004, PG): How often do you see a movie where a preteen boy yells in utter earnestness, "I love our family!" Sure, it helps that Dash and the rest of the Parrs are superheroes trying to find their place in an average world in this Pixar animation. But their solidarity — and teamwork — are inspiring. 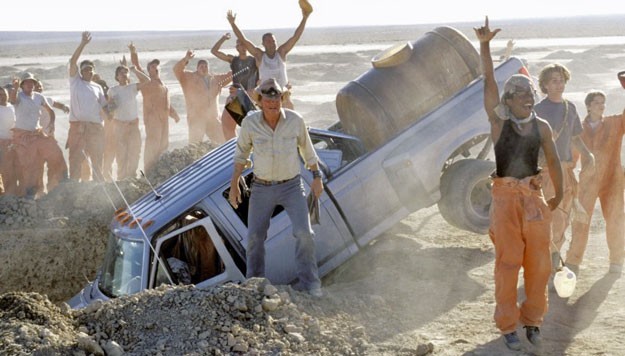 Holes (2003, PG): This flick based on Louis Sachar's novel puts its teen hero in the kind of hyperbolic misery that appeals to kids' imaginations: He's wrongly convicted of theft and sent to labor in the desert under the eye of sadistic commandant Sigourney Weaver. He finds his way out by befriending an ostracized boy and righting a century-old wrong.

Pee-Wee's Big Adventure (1985, PG): In Tim Burton's first and perhaps best film, Pee-Wee is essentially an overgrown 13-year-old who lives a blissfully independent existence until his beloved bike is stolen. He sets off on a road trip to find it, meeting colorful characters and facing his fears on the way.

Osmosis Jones (2001, PG): It's one thing to lecture kids on the dangers of a junk-food diet. It's another thing to show them from the inside out what happens to someone with bad eating habits — and to lace the biology lesson with car chases, cop parodies and slob humor. In live-action scenes, Bill Murray plays the bad eater. In animated sections set inside his body, Chris Rock voices Murray's heroic white blood cell who fights for his life.

Bonding With Other Creatures

The Black Stallion (1979, G): Before War Horse, there was this gentler and far more affecting (for my money) film about a shipwrecked boy and a proud horse forming a lifelong bond. Today's kids may find the pace slow, but the wordlessly beautiful desert-island scenes will hit home for anyone who loves animals.

How to Train Your Dragon (2010, PG): A young Viking who's supposed to kill dragons finds himself befriending one, then has to reconcile his bloodthirsty clan to his new buddy. This film has a lot of action, including a kick-ass girl character. But it works because the dragon isn't one of those cute cartoon-talking critters. It acts like a real animal: playful, powerful and always potentially dangerous.

Dragonslayer (1981, PG): This is a different kind of dragon fantasy. In the dark ages, a wizard's apprentice takes on the task that killed his master: slaying the hungry dragon that holds a kingdom in thrall. But he soon learns the dangers of his own arrogance. With a lush setting that is reminiscent of the Lord of the Rings films, and a strong tomboy heroine, this flick is unjustly neglected. It's PG-13 by current standards, with scary scenes and brief gore.

Wallace & Gromit, Various Short-Film Collections or The Curse of the Were-Rabbit (2005, G): Wallace is a bachelor inventor; Gromit is his dog, who comes to the rescue (with much eye rolling) when his master's absent-minded whimsy gets them in trouble. Just think of them as id and ego, and each short as an elegant — but, more importantly, funny — demonstration of cause and effect.

The Muppet Movie (1979, G): If your son liked the recent The Muppets, don't hesitate to show him the original film, in which humble, banjo-strumming Kermit the Frog sets off for Hollywood with big dreams and discovers love and danger on the way. Try Jim Henson's series "Fraggle Rock" on DVD, too.

Rango (2011, PG): A pet chameleon finds himself living out his hero fantasies when he's thrown from his glass cage and lands in the desert town of Dirt. Posing as a tough gunslinger gets Rango in trouble with the powerful parties exploiting the town, and he has to live up to his own claims when he joins the townsfolk in fighting for their freedom.

Daring Not to Conform

A Bug's Life (1998, G): In this early Pixar animation, Dave Foley voices an ant who doesn't go along with the prevailing views in his colony. When grasshoppers menace the ants, the tiny outcast sets out on a quest to find "warrior bugs" to protect them.

District 9 (2009, R): For teens who already seek out violent R-rated flicks, this oddball hit is several cuts above: It combines big robots, lots of shooting, a found-footage gimmick and a message about the dangers of dehumanization. A dithering, mild-mannered South African functionary never wonders what his superiors plan to do with the extraterrestrials they've been segregating in shantytowns — until an accident awakens his empathy for the despised aliens.