Beyond Ben & Jerry's: Even More Frozen Treats for Summer

It's high summer, and between the hot and muggy weather and the current political situation, we could all use a little something chill. In the immortal words of Led Zeppelin's "Whole Lotta Love": "You need cooling, baby, I'm not fooling."

So we went out to find you a fix. Plenty of places scoop ice cream, sorbet and gelato into dishes and cones, but we opted for the road less traveled and sought out purveyors of frozen treats who are stepping outside the carton to offer something unusual.

Some of these businesses do just one thing and do it well. Others offer an expansive selection of cool treats. All are worth a visit.

Eating frozen desserts won't fix the world's problems, but each of these businesses is doing something to promote sustainable agriculture, be it planting bushes and trees for bees or sourcing organic and local ingredients. Pretty cool, indeed.

Sno-Cones at the Farm Between and Arbor Farmstead

Five years ago, on a slow day at the Johnson Farmers Market, John Hayden of the Farm Between did an informal survey of customer behavior that led to a new direction. "We weren't selling much produce. We saw that people were buying a lot of prepared foods," he recalls. "I said, 'We have to come up with something.'"

After reading a New York Times piece on sno-cones and shave ice — a Hawaiian variation — he decided to buy an ice shaver and create his own using the farm's organic fruits and berries.

Since then, he and his wife, Nancy Hayden, have been selling what John refers to as "the only medicinal sno-cone in the world" — made with elderberry, ginger and honey syrup. "We grow all the fruit, we use our honey, but we do buy in the ginger," he says. Although they've tried growing ginger, it wasn't as pungent as the Peruvian version they purchase. 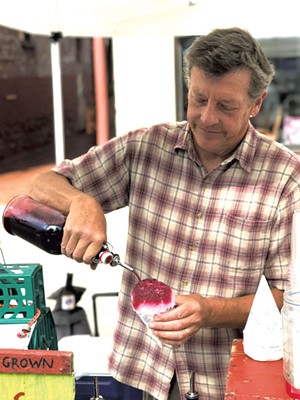 Other flavors include fan fave strawberry-rhubarb as well as blueberry, raspberry and the farmers' own preference, black currant. "Americans don't know black currant as well as Europeans do," John says. "We're kind of evangelical about it." When the time is right, they also make blackberry-lavender, plum and gooseberry-currant syrups. Want to make your own cone? You can buy the syrups, too.

The Lamoille County farm isn't the only place to find sno-cones flavored with real fruit. The Haydens have passed their passion for berries, and their sno-cone secrets, along to Alisha Utter of Arbor Farmstead in Grand Isle. She's a graduate of the University of Vermont's Farmer Training Program.

While being mentored by the Haydens, as part of that program and beyond, Utter bought her own sno-cone setup and began concocting an independent line of syrups. While the Farm Between sets up at the Burlington Farmers Market on Saturdays, Utter is at the Champlain Islands Farmers Market.

What's Utter's angle? Playing with flavors while staying "organic, hyper-local" and seasonal, she says. Briefly, in the spring, she made lilac syrup. Now she's experimenting with raspberry-beet. "I literally pick every piece of fruit that goes into the syrup," Utter says. The idea is to "capture the flavor of the season when it's at its peak."

Take the classic ice cream sandwich. To make their most traditional version, says co-owner Sarina Gulisano, staff underbake thin sheets of brownie and slather it with vanilla, coffee or mint-chip ice cream, all made in-house under the shop's Scout's Honor brand name. Another sandwich features a browned-butter and brown-sugar cookie with lemon ice cream; a third is made with gluten-free macaroons. "In those we do chocolate [ice cream] or seasonal fruit flavors [such as] strawberry-buttermilk," says Gulisano.

Scout's Honor ice cream also goes into milkshakes — some of which are boozy, as the Spot has a liquor license — and root-beer floats. "We make our own [soda] with a root-beer tincture, simple syrup and seltzer," Gulisano says. "And then we put in a scoop of ice cream."

How about the pops? "We just try to utilize whatever's in season and whatever's fun to use," Gulisano says. Flavors have included blueberry laced with cardamom; Amish peach and jalapeño; and house-roasted coffee with horchata. Sour-cherry lemonade and raspberries-and-cream are current favorites.

To make alco-pops — which, Gulisano says, "won't get you drunk" — she freezes a cocktail base of liquor and flavorings. There's a margarita pop, a mojito with homegrown mint, and the less-common Italian Greyhound, made of grapefruit juice, bitters and vodka.

Whether you're dreaming of the classic combo of chocolate cookie and vanilla ice cream or an original twist on a popsicle, the Sweet Spot has you covered.

With nine kinds of cookies and 13 different frozen treats to slather on 'em, Vermont Cookie Love can make a Lovewich, or ice cream sandwich, to suit any taste. "It's something we do to order," says owner Paul Seyler. "People can choose the ice cream they want and the cookies they want. It's a never-ending-combo possibility." The cookies are baked fresh daily, while the dairy comes from Wilcox Ice Cream of East Arlington.

One of the most popular Lovewiches combines the Addicted to Love cookie — flavored with ground coffee beans — and coffee ice cream. People also ask for Forbidden Love, cocoa dough with chocolate and white-chocolate chips, slathered with mint-chocolate chip ice cream. The Summer Love cookie, studded with dried raspberries and blueberries, is a perfect match for raspberry sorbet. Lovewiches can be made with vanilla, chocolate, maple or coffee creemee, too.

VCL also makes ice cream cakes, Seyler notes. These consist of Kingdom Creamery of Vermont ice cream, sprinkles of "cookie crush," and chocolate or salted-caramel sauce. "It's a throwback to Carvel but with better ingredients," he says.

Then there's VCL's frozen cookie dough, which the company sells at local stores and co-ops. Although it's made with pasteurized eggs, Seyler says, it's not intended as a frozen dessert on its own: "We sell it to be baked." Yet, he observes, "People tell me more and more that it never makes it to the oven."

When you order cider slush at Hackett's Orchard, you're getting more than a cool and refreshing drink. The slurry is made of pure apple cider and nothing else, and its taste changes as the season progresses and different types of apples ripen.

With 47 varieties in production, that mixture will never be the same twice. "Early on, [the flavor] is a bit light," explains co-owner Celia Hackett. "Later in the season, when the apples are more mature, they have a great flavor."

Hackett, who guesses that the "very popular" icy treat originated at state fairs, says that she and her crew work hard on creating cider blends that have a balance of sweetness and acidity, which leads to an ideal slush. "They're very good," she says. "They just speak for themselves, and they're nice, refreshing and healthy."

In addition to the cider slush, Hackett's offers cider doughnuts, veggies, pumpkins, syrup, honey, berries and frozen apple crisps to take home. Customers will find a selection of goods from other local farmers and producers, a playground, and, of course, pick-your-own apples.

There's something glorious about the simple purity of frozen fruit on a stick, and that's exactly what Adam's Berry Farm's popsicles consist of. Made with the farm's own organic strawberries, blueberries and raspberries, the pops encapsulate the brightest moments of each berry season.

The sweet treats help customers cool down at the Burlington Farmers Market and are available at the ABF farmstand in Charlotte. The farm carries plenty more fruity goodies, including vinegar, chutney, eggs (labeled on the website as "hen berries") and quince paste. Soon, Adam's Berry Farm pops will be available at City Market/Onion River Co-op, including raspberry-hibiscus mint, blueberry-lime and strawberry-lemon.

The original print version of this article was headlined "Cold Take"