By the time Bev Colston attended college in the 1970s, the Black Power and Black Is Beautiful movements had left a deep impression on her. "I was a young teen in the late '60s, when these movements were at their height, and benefited from the power and pride they imbued on young, black-identified folks like myself," she said. As she recalled, she learned to appreciate her beauty and intelligence at a time when "the whole culture is sending you a message that is quite opposite."

"We're not 'post-racial,'" said Colston, director of the Mosaic Center for Students of Color at the University of Vermont. Minority students at UVM, she noted, still have to grapple with the same issues that she faced decades ago.

"Racism is still racism," said Colston, now 62, during an interview in her office at the Living/Learning Center. "I can spot that ... and see how we, as folks of color, have to continue to deal with that as a factor in our lives and learn how to really love ourselves."

At the Mosaic Center, Colston and her staff of five provide direct services to students, help "make space" for them on campus and support their activism. This includes organizing events such as Friday Breakfast and Sisterhood Circle, as well as helping students create new affinity groups.

"'What is it that would make students of color self-loving, well and thriv[ing] on this campus?' is the question that we must consider daily," she said.

The center's new Dream Zone is the latest testament to the work that Colston and her staff do to enhance student wellness. The purpose of the space, which will open on Wednesday, November 15, is to assist students who are undocumented immigrants or who have undocumented family or friends. The development is timely, in light of President Donald Trump's September decision to rescind the Deferred Action for Childhood Arrivals policy.

"We are really excited about being able to expand what we offer," said Colston. The Dream Zone will provide resources and organize programming to support a community that lives in the shadows.

A native of Brooklyn, N.Y., Colston graduated in 1976 from the University of Pennsylvania, where she majored in psychology. In 1989, she and her husband, Hal, moved with their three children from Philadelphia to Vermont to accept administrative positions at the New England Culinary Institute in Montpelier. Colston stayed there for about a year and a half, then left to work at Mount Mansfield Union High School and Saint Michael's College, consecutively.

"I went to St. Mike's because I wanted to be in communities of color," Colston explained. There, she managed programming for international students.

Her husband went on to found the nonprofits Good News Garage and NeighborKeepers; he is now director of Partnership for Change, an organization that works with Burlington and Winooski schools to support a student-centered approach to education.

In 2000, Colston was hired as a student services adviser at what was then UVM's Asian-American, Latino, African-American & Native American (ALANA) Student Center. The name change to Mosaic Center for Students of Color coincided with the center's relocation last year from Blundell House on Redstone Campus to Living/Learning.

Colston said working with ALANA was a dream come true, because it involved counseling — something she enjoys. But she finds her leadership position "extremely meaningful," too.

"I cannot imagine a better job, because I am serving communities of color," Colston said.

Since the center moved to a more central campus location, more students have begun using it, according to office manager Tatiana Martinez. It's especially busy after 6 p.m., when various student groups hold their meetings.

"They have made this space theirs," Martinez noted.

Students who frequent the Mosaic Center described it as a safe haven. Said Jordan Quiles, who's multiracial, "It's a place that allows us, as students of color, to have a home, to feel welcomed at this overwhelmingly white institution." The free meals and networking opportunities during Friday Breakfast are also a draw, the junior from Barre added.

Last month, UVM campus police cited a continuing-education student, Wesley Richter, for disorderly conduct after he was overheard on the phone using racist and threatening language about black people on campus. The Mosaic Center, Quiles said, has been "the main body that's been providing us with comfort" after the incident, which he called "rattling." 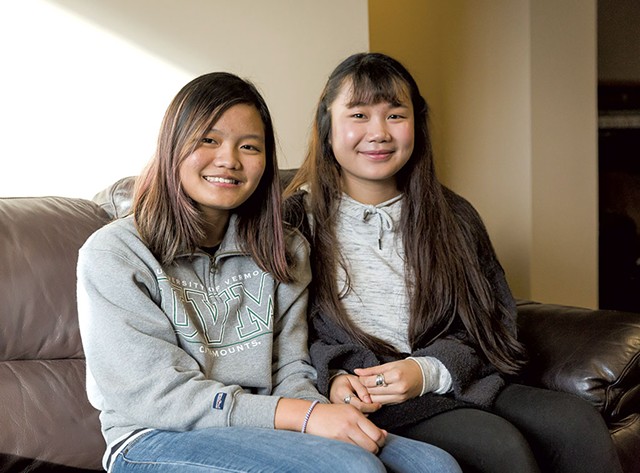 Before they began their freshman year at UVM last year, Ruth Doe and Pirawan Ratanapratum participated in a summer program organized by the Mosaic Center. "I got connected with all the staff," said Ratanapratum, who graduated from Peoples Academy High School in Morrisville.

"I feel like, if this place didn't exist, I would kind of hide my identity as a person of color," she said. "[I'd] feel less confident."

Doe said she likes the diversity of students at the Mosaic Center because it reminds her of her alma mater, Burlington High School. "When I have spare time, I'd come here just to see my friends, who are from different cultures," she said, adding that simply walking across campus can be "intimidating" when "you're different."

Now sophomores and members of the Asian Student Union, the young women chose to take work-study jobs at the Mosaic Center.

"When we are hiring, a lot of people want to work with us because of the reputation of this place," said Martinez. Colston is a popular figure on campus, she noted: "We have learned to support students in a nurturing way because we have a leader who has supported us in a nurturing way."

UVM senior Angelica Crespo described Colston as one of the most charismatic women she's ever met. "She has helped me get scholarships and has supported me when I thought I wanted to leave the university," Crespo continued. The Mosaic Center and Colston, she added, also offered support of various kinds when she established the Womyn of Color Coalition in 2015.

Though the students at UVM have made the Mosaic Center a place of their own, Colston hopes they won't isolate themselves there. "That's not what we want. We want them to own the campus," she said.

Sometimes taking ownership of the campus means educating university departments and faculty members about the needs of minority students. The response, Colston conceded, has been mixed. She recalled attending a mediation session with a student, an administrator and a faculty member who had uttered the N-word while teaching.

"It conveys, historically, notions of lynching, all kinds of horror," said Colston. "It was an assault to the student. The faculty person didn't fully get that and didn't get that the student didn't feel safe coming to class."

Because much of the center's work involves celebrating multiculturalism and minority identities, the national climate affects her and her staff, Colston observed. "When Trayvon Martin was murdered, we were all in tears ... We could barely work that day," said Colston.

Last year, the Mosaic Center received hate calls about two events it had organized: the Examining White Privilege Retreat and the Racial Aikido Retreat. The previous year, Todd Starnes of Fox News had called attention to the former event, mocking it as "Blame the WhiteGuy 2015."

"We didn't feel unsafe," Colston insisted of the phone calls. But she reported the matter to the administration and trained her student staff to handle similar situations.

In her 17 combined years at the ALANA and Mosaic centers, Colston said, she has never heard of a campus threat as "overt" as the one overheard last month. However, such incidents are not uncommon in Burlington, she said. Many Vermonters prefer not to admit that racism exists here, she suggested, because they don't want to believe that about themselves.

Over the years, the center has offered programming to meet the needs of an increasingly diverse student body. Colston is particularly excited about the Dream Zone. Graduate student Eloisa A. Romero has been tasked with launching a program that will serve the undocumented community — one whose size is unclear, given that the university neither inquires about nor keeps records of students' immigration status.

Visitors to the space will find books, resources and "Know Your Rights" cards in several languages. "Immigration is an issue that affects UVM students directly and indirectly, so we, the Dream Zone, will help students with this invisible identity," Romero said.

Not everyone agrees with the mission, or even the existence, of the Mosaic Center, Colston noted. In her mind, though, the center is simply one more student affairs department designed to assist sections of the UVM community. "No one makes it alone," she said. "We need others in order to make it."

The original print version of this article was headlined "Supporting Role"