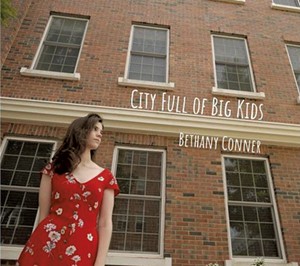 It takes only a simple Google search to find claims that stress levels, climate anxiety and depression among teens and young adults are on the rise in the U.S. When it feels like the world is on fire (literally), is there still room for hope, joy and heartbreak? On her latest EP, City Full of Big Kids, Essex Junction singer-songwriter Bethany Conner suggests that indeed there is.

"Every one of these things needs a dreamer, and this time, I guess it's gonna be me," she sings on "Clearer." And dream she does. Twenty-one-year-old Conner exudes romantic optimism in several of the album's seven pop-folk songs. On "Believe in Me," she asks, "Will you be mine when we're running out of time in the world?" — hope-filled words of a young person who still believes in everlasting love.

The themes of heartbreak and unrequited affection that drove Conner's 2015 debut EP, I'll Tell You, persist on City Full of Big Kids, but she broadens her perspective. The University of Vermont student faces unfamiliar surroundings in "The Laundry Song," yearns to be the change she wishes to see in the world in "Manhattan," and juggles competing feelings of anger, regret and tenderness in "I Miss You."

Conner, who was a finalist in Advance Music Center's 2014 Singer/Songwriter Contest, is the sole writer on her EP. Her lyrics evoke "Fifteen"-era Taylor Swift, plainly describing scenarios that are simultaneously deeply personal and broadly relatable.

As a singer and acoustic guitar player, Conner connects with this fan of mid-'90s Lilith Fair artists. A guitar line in "Jump," for example, immediately inspired me to revisit Jill Sobule's 1995 folk-rock hit "I Kissed a Girl."

Conner's voice often swerves into a warm warble, and she uses deliberate breaks in her voice for dramatic effect. In the course of the album, her delivery veers from sweet to snarky to seething. For the last mode, hear her snarl the line "'OK' is a word you say when you're not fine" on "Anchor." The EP's slow-burning standout song hints at rock with its intentionally imperfect vocals and driving low end.

Examining one's life in real time is no easy feat, especially during periods of rapid change, but this seems to be one of Conner's gifts. Her music is a record of one individual's experience of the world, told from the valuable perspective of a young woman in the 21st century. Here's hoping that her artistry — and her hope — persist.

City Full of Big Kids is available on streaming services and at bethanyconner.com. Conner performs on Friday, November 15, at 1st Republic Brewing in Essex Junction.