Beta Technologies Plans a Web of Charging Stations Across the Eastern U.S. to Power Its Electric Planes

The fixed-wing airplane — with rotors allowing it to take off and land vertically — this time touched down on the runway like a regular airplane. It pulled up next to a tall box installed in 2021 beside a patch of lawn. A ground crew from the pioneering South Burlington aviation company pulled a thick black electric charging cord out of the unit and plugged it into the side of the unusual craft known as an Alia.

"It was just like it was pulling up to a gas station," Beitzel recalled.

The 350-kilowatt charger is nearly twice as powerful as the fastest available to Tesla EV owners. After its batteries recharged for about an hour, the Alia took off for the next leg of its test flight. The company says the craft can recharge completely in 50 minutes.

"It's just really exciting to see new aviation technology being developed and having Rutland airport be a part of that new frontier," Beitzel said.

Engineers at Beta Technologies are racing to overcome myriad technical challenges to make battery-powered flight a commercial reality. They're trying to make the Alia as light and streamlined as possible so it can achieve its promised range of 250 miles per charge. They're working to maximize the power per pound delivered by its five lithium-ion battery packs. And they're hoping to convince regulators that their novel craft is every bit as safe as its fossil fuel-powered, emissions-spewing cousins.

But none of those innovations will matter if the Alia doesn't have enough places to quickly and conveniently recharge its depleted batteries. Much like Tesla built its own nationwide network of charging stations to keep its sleek EVs on the road, Beta has been constructing superpowerful electric chargers at airports from Vermont to Arkansas.

As fast as the company is expanding in Vermont — with a huge manufacturing facility at Burlington International Airport and a new battery plant in St. Albans — its growth outside the state is just as crucial to its success.

Today, its network is modest: just nine chargers for electric airplanes at seven strategically selected regional airports in Vermont, New York, Ohio and Arkansas. But the company has aggressive expansion plans; it expects to have 15 charging stations online by the end of the year, with 50 more in development.

The near-term goal is to extend the network down the East Coast, loop it back up though the Gulf Coast to the Midwest, and fill in the gaps to allow its electric aircraft to fly anywhere east of the Mississippi River.

Chip Palombini, who leads the charging infrastructure team at Beta, said the company's ultimate goal is to create a "mesh network" — a web of charging stations across the eastern U.S. "Then it's literally you go wherever you want," he said.

Unlike Tesla, whose chargers are for Tesla owners only, Beta has committed to building an open network for use by its own aircraft and those of its competitors.

Designing its fast chargers to be compatible with the technologies of other electric aircraft manufacturers will allow the network to be more functional and reliable — and cheaper, Palombini said. The company also hopes it will help spark an electrification revolution in aviation that Beta can't pull off alone.

"Our primary mission is to decarbonize transportation," Palombini said. "If it's a closed network that is only available to Alias, that limits how much carbon we can take out."

That's why the network includes not only electric aircraft chargers, but chargers for "terrestrial EVs" as well, he said. The company refers to this as a "multimodal charging infrastructure" capable of charging the electric cars, vans and delivery trucks that will carry passengers and goods to their ultimate destination.

Unlike other eVTOL makers focused on the "urban mobility," or air taxi, market, right now Beta is designing its aircraft to deliver goods rather than people. It has venture capital from several sources. It also has contracts for planes from United Therapeutics, a biotechnology company that intends to use the Alia to deliver transplantable organs directly to hospitals, and United Parcel Service, which announced plans to purchase 10 of the company's aircraft, as well as chargers.

Companies that invest in reducing the carbon footprints of their air operations also see the need to electrify their ground fleets, Palombini said.

"You can imagine that when the UPS electric van shows up to put cargo onto Alia, that's going to need to recharge," he said.

Fast chargers use direct current, or DC, instead of the alternating current, or AC, used in homes. The pricey chargers are some of the fastest available today and can recharge a typical electric car to 80 percent in less than an hour.

Beta's open network will also benefit EV drivers in rural areas that lack fast chargers, a gap that limits the growth of EV sales. For example, soon after Beta installed fast chargers at the airport in the small town of Springfield, Ohio, drivers began lining up to use them, Palombini said.

"You do get into this catch-22 where if there's no chargers, there's no EVs, and people say, 'There are no EVs here. Why would I install an EV charger?'" Palombini said. "In Springfield, we broke that cycle."

Beta is launching its charging network at regional airports in part because they're outside heavily populated areas.

"It's just easier to land [the Alia] where nobody cares," Beta founder Kyle Clark said during a speech at a conference earlier this year. 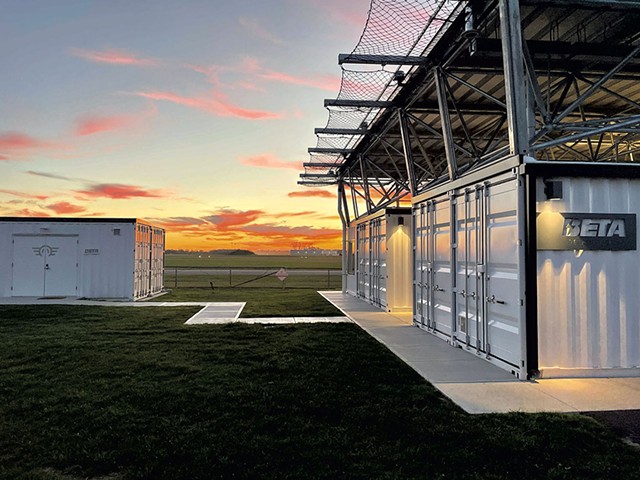 Building an EV charging network in out-of-the-way places seems counterintuitive. It's the opposite of what Tesla and other networks such as ChargePoint are doing, which is to focus on building capacity in the highest-traffic areas.

But Beta sees regional airports as underutilized assets. The company notes that most Americans live within 16 minutes of an airport, making them ideal charging locations for EV owners.

"A charging network that supports the transition to electric across all forms of transportation is good for us, while also being good for other electric vehicle companies," Clark said in a statement. "Ultimately, we see this approach as a faster way to move the needle and promote adoption of this new technology that will make a huge difference for our planet."

To make the EV charging option convenient, the company last month launched an app showing pilots and drivers where its chargers are located and whether they are available, and also enabling them to purchase a recharge. Costs vary by location, but the Alia costs are less than $20 per hour to operate, compared to $375 per hour for a similarly sized Cessna using $6.59 per gallon jet fuel, the company estimates.

In May, the company carried out a proof-of-flight test by placing chargers at spots between Plattsburgh, N.Y., and Bentonville, Ark., the site of an aviation conference called UP.Summit.

The Alia made seven stops along the 1,403-mile route over the course of a week; poor weather made the trip longer than expected. A chase team towed a diesel generator to recharge the Alia's batteries at the three stopovers where no chargers were available — underscoring the need for more chargers.

The team learned a good deal about its network on the trip, including the importance of making charging as smooth and user-friendly as possible. That informed the design of the company's new cube-shaped chargers. Outside Beta's headquarters at Burlington International Airport last week, as helicopters whirred overhead and Beta pilots taxied across the tarmac, Palombini opened the cube and unfurled the motorized power cord from its weatherproof housing.

The simple design eliminates the need for a touch screen or credit card reader, allowing a pilot to plug in an electric aircraft and complete the transaction on Beta's app, he said. The cube chargers are all that's really needed to recharge an Alia at a regional airport.

But for other locations, such as hospitals or cargo distribution centers, the company has a more elaborate solution. It's called a charge pad, or "vertiport." The idea is to have a place where pilots can land an Alia vertically and then rest or even sleep overnight while the aircraft recharges from a bank of batteries — not unlike the portable battery packs used to jump-start a car. This will allow fast recharging in remote areas where the grid is weak. After the Alia gets juiced up and takes off, the port's batteries will slowly recharge off the grid for the next quick-charge.

The customizable pads made of shipping containers can be outfitted with modern kitchens, sleeping areas with all the amenities of a small hotel room, and workshop or maintenance space.

These pads are not yet in operation but will likely be part of private networks built for use by Beta's clients, such as UPS and United Therapeutics. There are two prototypes: one in South Burlington outside the company's headquarters, the other in Springfield, Ohio. The company has not disclosed the cost of either type of charging platform, though the charge pads are clearly expensive affairs.

So the company's aircraft charging network will essentially be two networks, one public and one private. How quickly they come online and how much they overlap or interconnect with each other remain to be seen.

Richard Aboulafia,the managing director at Michigan-based AeroDynamic Advisory, an aerospace and defense management firm, said Beta's success will come down to whether it can deliver people and products more cost-effectively than ground transportation. The efficiency and effectiveness of its charging network are crucial.

"It's absolutely a hurdle that needs to be addressed, and it sounds like they are on it," Aboulafia said.

Correction, October 19, 2022: United Therapeutics has a contract for planes with Beta but has not provided venture capital, a spokesperson said. This post has been updated.

Beta Technologies will be recruiting — and giving people the chance to try its flight simulator — at the Vermont Tech Jam on Saturday, October 22, 10 a.m. to 3:30 p.m., at Hula in Burlington. Hands-on exhibits geared toward students will explain more about how Beta's planes work. To attend the free event, register at techjamvt.com.

The original print version of this article was headlined "Network News | Beta Technologies plans a web of charging stations across the eastern U.S. to power its electric planes"