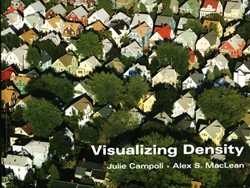 What will the Burlington of the future look like?

Will it have more tall buildings? How will it fill in the currently empty lots sprinkled around the city? Will it successfully integrate the preservation of historic structures with the construction of new ones? Will it be able to accommodate, say, 30,000 more residents? Or will newcomers find no place in Vermont's largest city and instead sprawl farther and farther across formerly bucolic countryside?

A new book co-authored by Julie Campoli, a Burlington-based landscape architect and site planner, has some answers - or at least guidelines. Visualizing Density does not address Burlington, or Vermont, per se. But, with several hundred images and accessible prose, it presents a compelling case for precisely understanding that urban buzzword: density. And it makes clear that, with 100 million more Americans expected by 2050, the country's cities and rural areas alike need to gear up for smart growth, a.k.a. good density.

At first glance, Visualizing Density looks like one of those Earth-as-seen-from-above books that simply display the patterns found in nature and generated by living organisms. A closer inspection reveals that this 152-page paperback is more pointed - it's all about how human environments, particularly housing settlements, are laid out in the U.S. Even before reading the text, one can glean from the pictures a story that is occasionally inspiring (well-designed urban density) and often alarming (profligate land use and wasted resources). Visualizing Density is generously illustrated with color photographs, shot by architect/aerial photographer Alex MacLean of Boston. They display urban and suburban neighborhoods across America - tightly packed or sprawling, horizontal or vertical, with every conceivable arrangement of streets. And "streets" is a key word in this book, as most of the communities depicted are utterly car-dependent.

Campoli and MacLean help their readers - whether city planners or developers, architects or students, or simply curious citizens - do just as the title suggests: See what density, good and bad, looks like. "We started this project because we found people were talking a lot about density but without actual visual images," Campoli says in an interview, adding that opponents often think density means "these terrible housing projects . . . It's all about trying to avoid making the mistakes."

Visualizing Density emerged from a five-year collaboration that has also resulted in a classroom course and a resource-rich website for the Lincoln Institute of Land Policy in Cambridge, Massachusetts. As an instructor for the institute and principal of Burlington's Terra Firma Urban Design, Campoli gives lectures around the country on sprawl, density, smart growth and site planning. She is also a former member of Burlington's Development Review Board. In 2001, Campoli penned Above and Beyond with Elizabeth Humstone, then executive director of the Vermont Forum on Sprawl; in that book, the authors used MacLean's aerial photos to examine how and why landscapes change over time. As human population is a dominant factor in that change, Visualizing Density was a logical follow-up.

Campoli addresses the import of this growth in an early passage:

To anyone even remotely interested in how we shelter ourselves and how we use land, the U.S. Census of 2000 revealed a startling fact: After dipping slightly in the past 50 years, our population growth rate has turned sharply upward. Between 1960 and 1989 it ranged from 22 to 24 million people added per decade. In the 1990s, however, we grew by 33 million. Each year, we add about 4.7 million people. At this rate, by 2030 we will be a nation of roughly 350 million. While the pace of population growth has accelerated, another fact remains constant - we have, and always will have, the same amount of land.

Where and how we build housing for all these people is the chief concern of Visualizing Density. Campoli notes that since the end of World War II, we have been growing out, converting former farmlands, forests and deserts into suburbs. And we have spread fewer people across each square mile, rapaciously consuming more land. MacLean's photos of communities such as Buckeye, Arizona, illustrate this point. Again, residents of such areas must drive everywhere in their own automobiles. Alongside the excessive use of dwindling fossil fuels, Campoli asks us to consider that "low-density development leads to higher public and private development costs as well" - such as "sewer, water, roads, electric and other infrastructure elements." Bigger picture: Consider the declining water table and the degradation of soil and air.

While thoughtless growth has resulted in a somewhat grim prospect for human habitation in the U.S., Campoli and MacLean offer some reasons for optimism, as well:

[In the 1990s] some cities in the West grew in rather than out. People returned to the central cores of a few cities. The market for multifamily homes grew. The movement toward greater density is mostly evident in the West, where land costs are high or water is scarce. Although this countertrend was minor in relation to the amount of sprawl overall, it may well point to a future direction.

Downtowns in Chicago, Denver, Seattle and Houston, among other cities, have grown in density over the past decade or so. Even sprawling Phoenix increased from 2228 people per square mile in the 1970s to 2707 in the 1990s, Campoli notes. Demographic trends such as aging baby boomers and increasing numbers of young singles and immigrants point to a growing demand for urban, multi-family, pedestrian-friendly housing areas. New markets for density have emerged in places such as Washington, D.C., where multi-family housing is on the rise - in both senses of the word.

And denser urban areas are actually more environmentally friendly than sprawling ones by "most significant measures," Campoli writes. "City dwellers use fewer energy resources and generate less pollution than their suburban and rural neighbors. People drive less where densities are high, streets are interconnected, and jobs are interspersed with housing."

So why do people tend to hate or fear the idea of density? Campoli concedes that there have been examples of bad dense development, but she argues that most opposition is based on misconceptions - and on failure to grasp what good density can and should look like. One impression she feels people need to overcome is that density means crowding. In fact, "places can be very dense, but may not be perceived as overcrowded if they are designed to comfortably accommodate many people," Campoli writes.

She identifies two other, possibly more recalcitrant, obstacles to smart growth. One is the need for regional - not just town or city - planning; the other is the need for what Campoli calls "a major shift in our thinking about how we get around." That is, transportation planning. In New England, Campoli says, a strong tradition of local control creates situations where adjacent towns may not talk to each other - and may even compete for business and residential growth. "We, on the Development Review Board, talked about how we could get together with South Burlington and other communities, but there was never time for that," she laments. "It's a dysfunctional system."

For Campoli, good density starts with good design. And that, she stresses, cannot be regulated. "What makes wonderful design happen is really talented architects," she suggests. "Especially with density, you have to design buildings very well, and have good site design . . . When architects have been allowed to build good buildings and developers have supported them, that's the seed," Campoli concludes. "You have to get something good started, and raise the bar up."