Bernt Out: Veteran Sanders Aide Calls It a Career

Ten minutes before Sen. Bernie Sanders (I-Vt.) took the podium at the Champlain Valley Exposition in March 2016, his presidential campaign manager approached his longtime state director with a message from the boss.

It was Super Tuesday, the night Sanders would lose a ribbon of southern states to Democratic rival Hillary Clinton and run up a delegate deficit he would never overcome. But it was also the night he'd win his home state by an astonishing 72-point margin — cashing in on the goodwill he'd earned over decades in office.

To warm up the adoring hometown crowd of 4,000, Sanders could have chosen any one of the celebrities or prominent politicos who'd recently glommed on to his campaign, but instead he picked his most senior and trusted aide.

Dressed in gray slacks, a black sweater and thick-rimmed glasses, Fiermonte bounded to the stage to salute a man he introduced as "the next president of the United States."

More than any other aide — with the possible exception of Weaver — it was Fiermonte who had laid the groundwork for Sanders' Green Mountain landslide. For the better part of the previous 35 years, he had built his boss' political operation one spaghetti supper, town hall meeting and voter registration drive at a time.

Now, after two decades as Sanders' top state staffer, the 62-year-old Burlingtonian is preparing to call it quits at the end of the year. 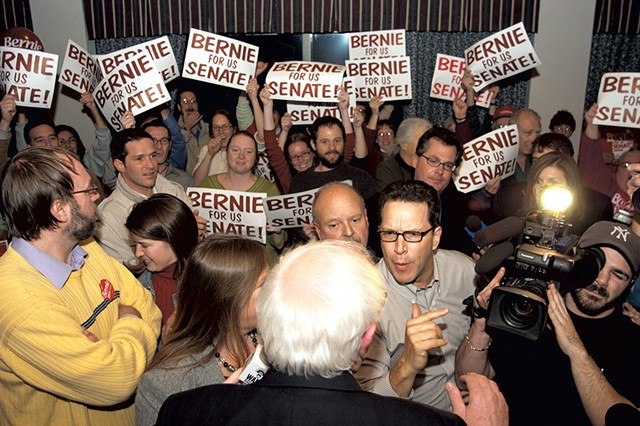 "It seems like a good time to make a change," Fiermonte said, explaining that he hopes to spend more time with his Montréal-based partner and his 96-year-old father. "I tell people I'm retiring from 20 years of federal government service but not from a lifetime of social activism." His only immediate plans, he said, are to join the board of the Vermont- and New Hampshire-based progressive group Rights & Democracy.

In Sanders' world, where loyalty is measured in decades, not years, Fiermonte will not easily be replaced.

"Bernie and Phil, they're extremely tight," Weaver said. "It takes a while for Bernie to warm up to people, but Phil has been there through a zillion campaigns — in the House office, the Senate office and on the presidential campaign."

Fiermonte's departure follows that of longtime spokesman Michael Briggs, who left Sanders' Washington, D.C., office earlier this year. It also comes as his boss gears up for a second Senate reelection race in 2018 and, potentially, a second run for president in 2020. A Sanders spokesman said this week that the senator had yet to name a new state director or campaign manager.

In a statement to Seven Days, Sanders called Fiermonte "a highly valued coworker" and "a close personal friend."

"His incredible work ethic, generosity of spirit and humility has made our office more congenial, productive and efficient," Sanders said. "He will be missed very much."

The son of the town doctor in the Canadian border burg of Derby, Fiermonte got his first taste of progressive politics volunteering as a teenager for George McGovern's 1972 presidential campaign. After graduating from the University of Vermont, he worked as a community organizer in Winooski and Burlington, where he got to know a long-shot mayoral candidate in 1981.

"When I saw Bernie during that campaign and as mayor, I just knew he was somebody who had deep principles and was incredibly effective," Fiermonte said.

Years before he went to work for one Vermont congressman, Fiermonte had been a thorn in the side of another. In 1984, he joined a four-day occupation of Republican U.S. senator Robert Stafford's Winooski office to protest the Reagan administration's involvement in Nicaragua and El Salvador.

"A lot of us went in, and 44 of us stayed," Fiermonte recalled. The so-called "Winooski 44" were charged with trespass but acquitted under the "necessity defense," an unusual legal theory that their wrongdoing was in the furtherance of a greater good.

The young activist became so devoted to labor rights that in the mid-1980s he obtained a degree as a radiation technician in order to infiltrate medical centers and unionize them. That tactic led him to hospitals in California and, eventually, back to Burlington's Fletcher Allen Health Care, now known as the University of Vermont Medical Center.

"To me, that's a certain level of dedication and focus that is perhaps larger than what other people think about," said Michael Monte, an early boss of Fiermonte's at the King Street Youth Center and now the chief operations and financial officer at Champlain Housing Trust.

Years later, during a hiatus from the Sanders office in 2001 and 2002, Fiermonte finally succeeded at unionizing nurses at Fletcher Allen, acting as director of the American Federation of Teachers' local affiliate.

"Phil's ability to connect with people was instrumental in helping lift up and bring up the voices of nurses," said Mari Cordes, a registered nurse who worked with Fiermonte and later led the local affiliate.

Fiermonte briefly dabbled in electoral politics himself, representing Ward 3 on the Burlington City Council from 2000 to 2006. There, he fought for affordable housing and authored the city's livable wage ordinance. But according to state Sen. Chris Pearson (P/D-Chittenden), who got his start working under Fiermonte, his former boss was always happier behind the scenes.

From 1993 to 2000, and since 2002, Fiermonte has run Sanders' House and Senate offices in the state. In that capacity, Weaver said, "He has always been the eyes, ears and face of the Bernie organization in Vermont."

According to Tricia Coates, who played a similar role for Congressman Peter Welch (D-Vt.), the job has three main components: managing the member's constituent service operation, organizing his Vermont schedule and keeping him apprised of home-state developments. It also involves the occasional frenzied drive to Burlington International Airport for a flight to D.C.

"You can always count on Phil to get you there with a minute to spare — no matter what time you leave," said Coates, now director of external and governmental affairs at the Vermont State Colleges. "And he always drives American-made, labor-built vehicles."

Working for Sanders has its drawbacks. He is widely known as a demanding, micromanaging boss who doesn't know when to call it quits.

"I gotta think that working for Bernie is like running a marathon, only it's 365 days a year," said Monte, who worked for Sanders in city hall. "I think sometimes it's been hard on Phil, but it's also been hugely rewarding."

One of those rewards was getting the chance to plan a presidential campaign.

Within months, Fiermonte was struggling to book venues big enough to hold the crowds that would arrive. At a June 2015 rally in Minneapolis, 4,000 people showed up for a rally initially planned for 200.

"We're driving there, and Bernie's like, 'Who are all these people?'" Fiermonte recalled. "I said, 'Bernie, they're here for you.' And he was stunned. That was the first indication that his presidential campaign had the potential to get big."

By the end of the year, Fiermonte had pulled back from the day-to-day operations of the campaign and traded his role as field director for senior adviser. Friends say he needed to take a break, but Fiermonte himself downplays the transition.

At the March 2016 Super Tuesday rally, Sanders' invitation to warm up the crowd seemed a tribute of sorts to a trusted friend.

"It was a really nice nod," Fiermonte said.

After delivering his remarks, the Derby native did what he always does: He listened to his boss.

"It's funny. I think I've heard more Bernie speeches than anyone — and it never gets old to me," he said. "It's pretty much always the same speech, but I always listen, and I'm taken in every time."