Bernie's Big Dilemma: A Dem or an Indie Run? 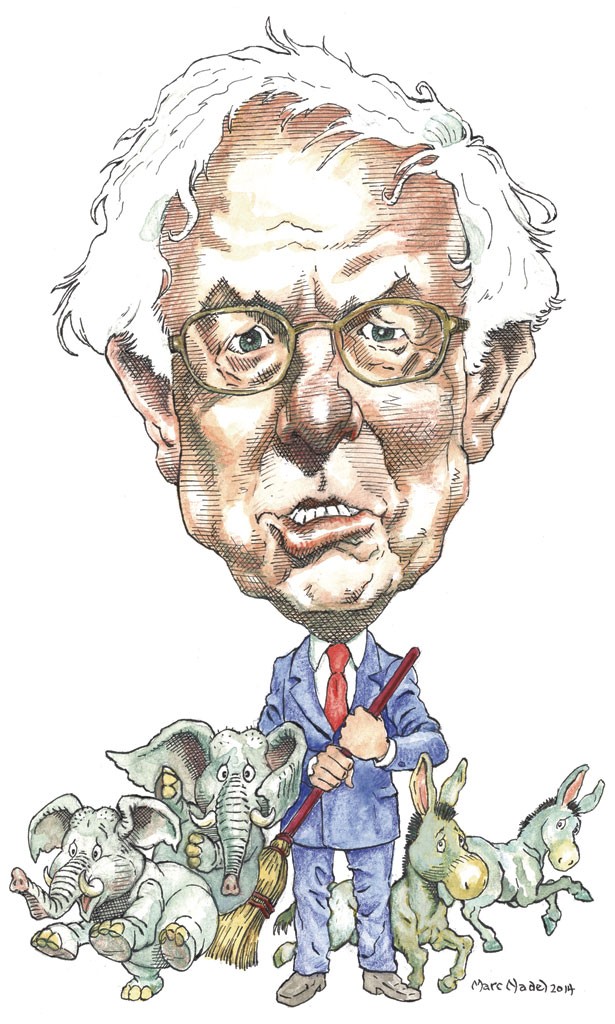 A photo gallery of U.S. presidents lines the walls of the auditorium in Manchester, N.H., where Sen. Bernie Sanders spoke last Saturday. Each of those politicians, dating back to Dwight Eisenhower, began his journey to the White House by campaigning in New Hampshire's presidential primary.

While it's unlikely that an image of Sanders will one day be included in that group, it is possible that the independent senator from Vermont could alter the course of the 2016 presidential race — if he chooses to run.

Sanders does seem inclined to do so, provided that his current consultations with progressives around the country produce strong signals of support. And his message got a vigorously positive reception on Saturday.

Roughly 200 audience members greeted Sanders with a standing ovation, which they repeated at the conclusion of a 70-minute speech rich with the themes of class injustice that he has consistently been sounding for more than 40 years. "If you could give this address in every home in America," a middle-aged man told Sanders during the question-and-answer session, "I think you'd be elected president."

That comment would encourage any pol considering a bid for the nation's highest office. But Sanders isn't just any pol; he's got a unique dilemma to resolve if he sets his sights on the Oval Office.

Should he run in the presidential primaries, as did all the figures enshrined on the walls of the New Hampshire Institute of Politics? Or should he campaign as an independent once the two major parties have selected their nominees?

The second option would be "the more radical approach," Sanders said in a recent interview with journalist John Nichols of the Nation magazine. And to the sole socialist in Congress, "radical" is an affirmative term.

Running as an independent would enable Sanders to continue burnishing the brand that sets him apart from all other American officeholders. Having first been elected to the House in 1990, he ranks as the longest-serving independent member in congressional history.

Maintaining his status as an outsider would also enable Sanders to lambaste insiders without exposing himself to charges of hypocrisy or opportunism. He's built a career on criticizing the Democratic as well as the Republican Party.

Reflecting on the aftermath of his upset victory in the 1981 Burlington mayoral election, Sanders wrote in his 1998 political autobiography, Outsider in the House, that he had sought to "expose the local Democrats and Republicans for what they were — obstructionists and political hacks who had very few positive ideas." The leaders of the two major parties in Burlington were so similar in their conservative views that Sanders and his supporters denigrated them as "Republicrats."

He doesn't use that label now, but Sanders' view of today's national Democratic Party hasn't mellowed much from the days when he was depicting Burlington Democrats as "in cahoots with the downtown business community ... and out of touch with the concerns of the average citizen."

In his Nation interview last month, Sanders said, "There is no question that the Democratic Party in general remains far too dependent on big-money interests, that it is not fighting vigorously for working-class families." How can it be, he wondered, that a majority of white working-class voters support a Republican Party that "wants to destroy Social Security, Medicare, Medicaid"? The reason, he suggested, is that "the Democrats have not been strong in making it clear which side they are on, not been strong in taking on Wall Street and corporate America."

An independent campaign for the presidency, Sanders added in a telephone interview on Sunday, would be about "building a grassroots movement" that could help launch "a political revolution in this country."

It's virtually impossible to get elected president as an independent, but that wouldn't dissuade Sanders from running as an agitator candidate. "My whole life in politics has been not just with passing legislation or being a good mayor or senator, but to educate people," he told Nichols.

And the aim of such education efforts isn't academic, in Sanders' thinking; it's political. In Manchester, he said the proudest accomplishment of his first term as mayor of Burlington was doubling voter turnout. "If you listen to what people say and what they need and if you fight for them, they will participate in the political process; they will vote," he told the New Hampshire audience.

But while Sanders' heart might be telling him to run as an independent, his head may be saying it's wiser to campaign in the Democratic presidential primaries. And history shows that he can be as pragmatic as he is principled.

Sanders caucuses with the Democrats in the Senate, which enabled him to become chairman of the Committee on Veterans' Affairs He works closely with Democratic majority leader Harry Reid and a half dozen or so liberal Democratic senators. Like any Dem, Sanders regularly pays dues to the Democratic Senatorial Campaign Committee, which works to preserve that party's majority. In January, his Progressive Voters of America leadership PAC contributed $15,000 to the DSCC.

Sanders has made peace with the party when it's been in his political interest to do so.

In the 1980s, he recounts in Outsider in the House, some members of Burlington's nascent Progressive Coalition were opposed to working on behalf of progressive presidential candidate Jesse Jackson "because Jackson was running within the Democratic Party." Sanders didn't share that view, and the local Progressives ultimately decided to support Jackson. Sanders himself campaigned with Jackson in Burlington and even took part in the Vermont Democratic Party caucus in order to cast a vote for the African American standard bearer of the Progressive-run National Rainbow Coalition.

Thirty years later, Sanders sees practical advantages to running in the Democratic presidential primaries. "It's a helluva lot easier to get on the ballot in 50 states" in those primaries than it is as an independent, he said in the interview on Sunday. It's also less costly to run in primaries than in a national election. Sanders would have to raise many millions of dollars in order to be taken seriously as an independent candidate.

He further recognizes the potential political disadvantages of running as an independent, who would drain votes from the Democratic presidential nominee. "I will not allow my candidacy to elect a right-wing Republican," he said on Sunday.

Sanders has alluded to a scenario in which he campaigns as an independent and withdraws prior to the election if his candidacy might benefit the Republican candidate. He's clearly not willing to reprise the role Ralph Nader played in the 2000 election. Many analysts argue that Democrat Al Gore would have defeated Republican George W. Bush if Nader had not insisted on running as an alternative to two candidates whom he depicted as essentially interchangeable in their politics.

Having witnessed the effects of George W. Bush's presidency, most progressives will have little stomach for an independent campaign that might indirectly help defeat the Democratic nominee, Nichols said in a telephone interview on Monday.

Sanders probably has more to gain for his political agenda by running in the Democratic primaries than as an independent, added David Sirota, a former Sanders press secretary who now works as a journalist and commentator. The senator could potentially shift the terms of the national political debate by focusing resources on New Hampshire's first-in-the-nation primary, Sirota suggested in an interview.

Minnesota Sen. Eugene McCarthy profoundly changed the national political calculus by winning 42 percent of the New Hampshire primary vote in 1968, Sirota recalled. President Lyndon Johnson won that contest but was so wounded by McCarthy's insurgency that he soon dropped out of the primaries and did not run in the general election.

Drawing on his "army of supporters" across the Connecticut River in Vermont, Sanders might conceivably win in New Hampshire — or at least do well enough to force the Democratic front-runner, presumably Hillary Clinton, to echo Sanders' call for economic equity, Sirota said.

He'd then have to expose Clinton as "a pretender," Sirota continued. Sanders would also "have to be willing to make some significant enemies inside the Democratic Party." If all that holds true, running to win in New Hampshire could prove "a shrewd move" on Sanders' part, Sirota said.

Nichols agreed that Sanders should "run to win" if he does enter the Democratic primaries, but that he would have to start with the Iowa caucuses that are held a couple of weeks prior to the New Hampshire vote. And there's no guarantee that Sanders would do well in New Hampshire in a race against Hillary Clinton, Nichols cautioned. He noted that Clinton and her husband are popular political figures in the Granite State, which helped revive Hillary's campaign in 2008 after her poor showing in Iowa.

For his part, Sanders dismisses the independent-versus-Democratic primaries debate as "inside baseball." Such considerations are of little interest to Americans not obsessed by the political process, the senator said on Sunday.

But Sanders was not so quick to wave aside another speculative aspect of a 2016 presidential race.

In Outsider in the House, he wrote that "liberals were angry I was running against a female Democrat" in the 1986 Vermont governor's race. Madeleine Kunin prevailed in that election with 47 percent of the vote, to Republican Peter Smith's 38 percent and a bit more than 14 percent for independent candidate Bernie Sanders.

Might the same dynamic come into play if he were to try and impede Hillary Clinton's effort to become the first female president?

"There's no question that women and many men would like to see a woman run for president," Sanders replied. "But I think the more important consideration is not whether you're a man or a woman, black or white, gay or straight, but whether you are the person who will address the crises we are facing in this country."

And in his Nation interview, Sanders made clear that he does not believe Clinton fits the bill.

"I like Hillary; she is very, very intelligent. She focuses on issues," he told Nichols. "But I think, sad to say, that the Clinton type of politics is not the politics certainly that I'm talking about ... The same-old, same-old [Clinton administration Treasury Secretary] Robert Rubin type of economics, or centrist politics, or continued dependence on big money, or unfettered free trade. That is not what this country needs ideologically. That is not the type of policy that we need," Sanders said.