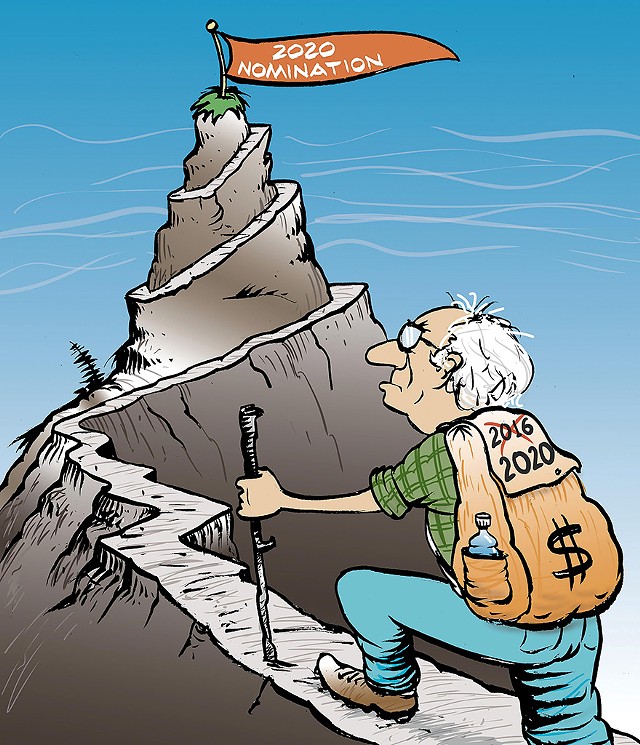 Last week, the Doom Patrol came calling for Sen. Bernie Sanders (I-Vt.). Suddenly, the Beltway press was bursting with predictions of trouble for Sanders' presidential campaign after a perceived lackluster showing at the June 27 Democratic debate.

Politico, July 4: "Bad News for Bernie Has His Backers Getting Antsy"

The reports were vastly overblown, the apparent product of the political press' herd instinct at work. Sanders didn't create a viral moment in the debate, but he more than held his own. He remains in the top tier of candidates. He scores very high in name recognition (which is a bit of a mixed blessing, as we shall see). His organization, volunteer base and fundraising prowess will keep him competitive for the long haul. It's absurd to think that his campaign is on the brink of disaster.

But still, there are warning signs for Team Bernie. His road to the Democratic nomination in 2016 was difficult but clear: Provide a progressive alternative to Hillary Clinton. The 2020 field is much bigger, and its dynamics are less predictable.

Presidential polls are notoriously unreliable predictors this early in the game. But they can reveal the direction and shape of the race. The more in-depth surveys provide information on how and why voters are making up their minds and the strengths and weaknesses of the candidates.

National polls taken since the June 26 and 27 Democratic debates have former vice president Joe Biden leading and Sanders (for the most part) a strong second. But all show clear positive trends for Sens. Elizabeth Warren (D-Mass.) and Kamala Harris (D-Calif.) and, to a lesser extent, Pete Buttigieg, mayor of South Bend, Ind. (No other candidate consistently scores higher than two or three percentage points.)

Warren's showing ought to ring alarm bells at Sanders HQ, given that she is proving herself to be a powerful competitor for progressive votes.

A member survey conducted after the debates by Indivisible, a national progressive organization, showed Warren and Harris way out in front with 35 and 31 percent, respectively. Sanders was a distant fourth with 9 percent. The survey didn't pretend to be scientific, but to see him lagging so badly in that crowd is something of a shock.

In the first caucus state, Iowa, a post-debate poll showed a five-way jumble with Warren at 20 percent, Harris at 18, Biden 17, Sanders 12 and Buttigieg 10. A single poll doesn't prove anything, but it's not great news for Sanders, who finished a whisker behind Clinton in the 2016 caucuses and often boasts of his strong Iowa ground operation.

A poll conducted before the debates in mid-June for Crooked Media, a political media company best known for the Pod Save America podcast, was designed to provide an in-depth look at the Democratic electorate in the early states of Iowa, New Hampshire and South Carolina. Biden got 29 percent, Sanders 20, Warren 19 and Buttigieg 14. The survey doesn't reflect Harris' recent surge, but it does reveal dynamics of the race that should concern Team Bernie.

When respondents were asked to name their second choice, Warren scored highest with 20 percent followed by Biden with 18 percent and Sanders and Buttigieg at 15. That's despite the fact that respondents placed a high priority on electability and largely viewed male candidates as more electable.

Sanders was the best-known candidate, with 70 percent name recognition. That's a good thing — except when it's not. Sanders doesn't have to get his name out there, but he will have to win over a lot of voters who already know him and don't support him. That's going to be tricky, since Sanders is essentially running on his 2016 agenda and claiming his consistency as a virtue. How does he freshen his appeal while staying true to himself?

Finally, the poll gave Biden and Sanders the edge among those who haven't paid much attention to the race. Among well-informed voters, Warren finished first with 25 percent followed by Biden with 23, Buttigieg with 16 and Sanders with 14. More people will become actively engaged over time, and if the trend continues, it could mean trouble for Biden and Sanders.

Fundraising is another of Sanders' strengths. For the full year, he has raised far more money than any of his rivals, virtually all of it from small-dollar donors. "It is the kind of support we would take any day of the week over a cushy, closed-door, high-dollar fundraiser in New York City at which people eat Parmesan-crusted salmon on toothpicks," Sanders campaign manager Faiz Shakir said during a July 2 conference call with reporters.

Clever line, if obviously rehearsed. And off-target, at least when it comes to Warren and Buttigieg. Sanders took in $18 million during the second quarter from an impressive 1 million donors for an easily calculated average gift of $18. Warren has also eschewed big-dollar fundraising and raised more than $19 million; the average donation was a Bernie-esque $28. Buttigieg raised more than $24 million with an average gift of $48. Biden, who presumably led the field in Parmesan-encrusted salmon, was second in the dollar race with $21.5 million and reported an average donation of $49.

The Sanders campaign initially offered a spokesperson to comment for this column but failed to deliver. We do have the explanations offered in that July 2 conference call, which lean heavily on the three Ds — deny, divert, downplay.

"There have been moments when people have written off the [Sanders] campaign," said Shakir, vigorously punching a straw man.

"We don't have to raise the most money," said senior adviser Jeff Weaver. "We're much more efficient, much more reliant on a vast network of volunteers all across this country."

Former Ohio state senator and Sanders campaign cochair Nina Turner touted "people raising" in tandem with fundraising. True, but campaign leaders have never been shy about flaunting their financial muscle when they were outraising the field.

However, it's no longer unique to Sanders. His challengers have learned from his example and are quickly closing the gap.

Conclusion: It's a long and rocky trail to the Democratic National Convention. Bernie's an experienced climber, but this is looking like a tougher challenge than 2016. In January of this year, Nate Silver of FiveThirtyEight observed that Sanders has "a high floor but a low ceiling," meaning that his supporters are rock-solid, but he'd have trouble broadening his base.

That remains the fundamental challenge for Bernie 2020. If the Sanders team doesn't have a cold-eyed, realistic view of his weaknesses as well as his strengths, Sanders' second run for president may come to a quicker and more inglorious end than his first.

An out-of-state corporation has canceled a $15,000 underwriting contract with VTDigger.org because, um, the news organization was doing its job. FirstLight, an Albany, N.Y.-based operator of internet and telecommunications networks, pulled its support on July 3, two days after Digger reported that FirstLight was using equipment made by Chinese tech giant Huawei in its Vermont network. Earlier this year, Gov. Phil Scott's administration banned the use of Huawei gear in state systems, citing security concerns; FirstLight will soon become the carrier for Vermont's 911 system.

FirstLight has vigorously denied Digger's findings, demanded a retraction and threatened legal action. (FirstLight did not respond to my requests for comment.)

Digger's founder and editor Anne Galloway said this is the first time an underwriter has pulled the plug in the middle of a commitment, but other businesses have ended their relationships between contracts. "Jay Peak, for example," Galloway noted. "They advertised with us back in 2015, but then they stopped." Not a surprise, given Digger's continuing investigation of the resort's entanglement in the EB-5 scandal.

"We tell underwriters, 'We bite the hand that feeds us,'" Galloway added. "Those of us who do investigative work realize it can have a chilling effect on underwriting."

FirstLight's hardball offensive may well backfire. The corporation will have a tough task convincing anyone of malign intent on Digger's behalf, thanks to the organization's journalistic reputation. In any case, lawsuits against news organizations are easy to file but difficult to win.

Speaking of the business of journalism, Digger is losing a key member of its financial team. Phayvanh Luekhamhan, director of business development, finance and administration, has been at the heart of Digger's efforts to become a sustainable enterprise for the past five years. Now she's taking her expertise to a much bigger stage. She's joining the staff of LION Publishers. That's short for Local Independent Online News. "It's a trade association for online news publishers," Luekhamhan explained. "I'll be spreading the knowledge of what we've accomplished [at Digger] to help people establish similar operations across the country."

LION is expanding, thanks to a $1 million, multiyear grant from the Knight Foundation, which funds efforts to strengthen local journalism in the digital age. Luekhamhan won't have to relocate; LION's staff is distributed around the country, so she'll be working remotely from her central Vermont home.

Finally, a well-known voice from Vermont Public Radio's past has been silenced. Steve Delaney, who preceded Mitch Wertlieb as local host of "Morning Edition," died late last week. Delaney had a long and distinguished career in journalism; he was a correspondent for NBC News and Christian Science Monitor Radio, and he wrote several books about Vermont.

According to VPR, Delaney's family is planning a celebration of his life in Milton on July 27.