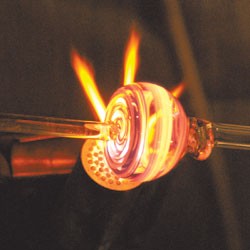 It’s never been easy for college students to convince their parents of the career-worthiness of taking gut classes such as Pottery 101 or the History of American Cinema. One can only imagine what their folks will say about footing the bill for a 10-week course on bong making.

Fortunately for some Vermonters who sign up for one of the Bern Gallery’s glass-blowing classes this fall, they won’t need to ask their parents for a dime. The gallery’s Bern School of Glass has offered courses for people interested in pursuing a career in glass blowing for five years. But for the first time this fall, the Vermont Student Assistance Corporation (VSAC) will allow qualified Vermonters to apply for grants to pay for it.

Tito Gross, 34, is co-owner of the Bern Gallery on Main Street in Burlington. Now in its sixth year, the shop sells a variety of handmade glass objets d’art, including many functional pipes and bongs. But as Tito — who goes by just one name professionally — explains, the art of pipe making dates back thousands of years and isn’t necessarily about getting a buzz on.

“Glass blowers like myself really consider ourselves artists who use the pipe as their canvas,” he says. “A lot of people get hung up on what somebody’s going to smoke out of that pipe. For all we care, it’s all for tobacco. We’re just concerned about the art.”

Indeed. Regardless of their functionality, many of the glassworks on display in the Bern Gallery bear only a passing resemblance to conventional drug paraphernalia. Large, creative and often exceedingly intricate in their complexity and design, many sell for several thousand dollars apiece.

Yet, despite the somewhat limited clientele for the most expensive items, the Bern Gallery is always looking to hire qualified glassblowers on its staff. To that end, this year the school partnered with VSAC to offer two 10-week classes in glass blowing with a job-placement option upon completion of the second “diploma.” Tito and his wife and gallery co-owner, Mikeala, are hoping the VSAC grants will help create a pipeline of artists in the burgeoning field of functional glass art.

By the end of the first 10-week class, students will learn the fundamentals of glass pipe making, which, Tito explains, essentially means creating a clear, solid glass spoon. By the end of the second course, students will learn how to color the glass and add other designs and features. Developing the skills to craft a glass pipe that looks like a jellyfish or giraffe takes considerably longer.

But, as Tito points out, Burlington is fast becoming a hotbed for budding glass blowers, some of whom leave Vermont to pursue careers elsewhere. But many who’ve trained at the Bern School have gone to work for the company, which now ships glass products throughout the United States, Canada and the UK.

In the third week of September each year, the Bern Gallery sponsors a “Pipe Classic,” the only competitive glass-pipe-making competition in the country. In the style of the Food Network’s “Iron Chef America,” the Pipe Classic brings together a dozen of the nation’s top pipe makers to face off in a 12-hour glass-blowing marathon. The first-place winner takes home a gas torch worth $4500.

Local college students should be advised that VSAC grants are only for Vermont residents who’ve lived in the state for at least a year prior to starting their education. Moreover, college students shouldn’t expect their pipe-making classes to count toward a bachelor’s degree in philosophy, engineering or environmental sciences, especially if they receive a non-degree VSAC grant.

When asked if he’s worried about teaching his art to people who may eventually become the Bern Gallery’s competition, Tito seems unconcerned.

“We’re happy to keep teaching the art to as many people as possible,” he says. “Whatever they do with it in their life, we wish them luck.”

This story has been updated from its original version to clarify the nature of VSAC's grants.

Arts News art state of the arts education back to school