Berlin Cop Who Murdered His Ex Previously Spoke of Killing Her, Colleague Says 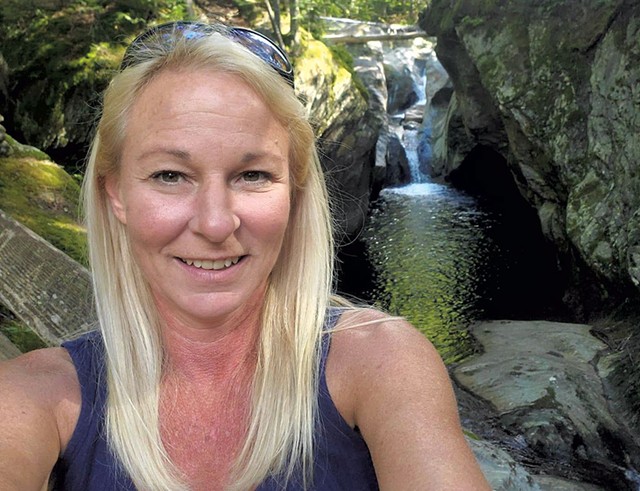 In the final months of his life, Berlin police officer Jeffrey Strock would break down and cry, a coworker recounted to Vermont State Police investigators.

Strock was upset about his on-again, off-again relationship with ex-girlfriend Julie Fandino. Sometimes, Strock would say things were looking up because Fandino was still communicating with him, Officer David Rhoden told state police detectives. But there were also "really bad days" when Strock would cry and talk about how much he missed her.

In September 2020, Strock became "very upset" while the two were on duty, Rhoden recounted.

"He was screaming a lot and crying a lot, and he said he has thought about shooting [Fandino] and himself," Rhoden told state police.

Rhoden stopped the cruiser, asked Strock if he was serious and offered to take him to the hospital if he was. "No," Strock responded, according to Rhoden. "I'm having a hard time."

Rhoden told investigators that he took Strock at his word and never told his superiors at the Berlin Police Department about the comment.

Not long after, on October 12, 2020, Strock drove his cruiser to Fandino's Barre apartment. He shot her multiple times with his service weapon, then fatally shot himself.

Two years later, Fandino's children are suing the Town of Berlin and its police department for negligence, saying they failed to protect their mother from a crime that could have been prevented.

"Incomprehensibly, the police took no steps to warn Julie one of its officers intended to kill her and took no steps to protect her," the complaint, filed last month in Washington County, alleges.

Investigative documents describe an officer of the law who had become increasingly unstable in the final weeks of his life. tweet this

The lawsuit draws from the findings of a Vermont State Police investigation conducted in the weeks after the murder-suicide. In response to a public records request, state police provided Seven Days with a heavily redacted version of the report, the contents of which have not been previously reported.

The documents describe an officer of the law with a history of domestic violence and depression who had become increasingly unstable in the final weeks of his life.

The probe suggests that the department had reason to doubt Strock's fitness for duty and raises questions about whether anything has been done to prevent something like it from happening again — which no public official seems willing to answer.

Berlin police leaders and those at the state police declined interviews for this story, citing the pending lawsuit. The Vermont Attorney General's Office, which reviewed the case, also declined to comment.

The report says state police investigators learned about at least two domestic incidents involving Strock prior to Fandino's murder. A romantic partner reported that he had threatened her with a knife some 20 years prior. And, in 2016, a woman called police during an argument with Strock before hanging up. She told police soon after that everything was fine, that Strock did not get physical with her and that she did not want him to get in any trouble.

The lawsuit alleges that police were sent to Strock's home numerous other times while he was employed as a cop — and that Berlin police were notified about each incident.

Berlin's police chief, James Pontbriand, told Seven Days that the claim was "factually inaccurate" but would not elaborate.

The family's attorney, Jim Mackall, declined an interview. But in response to Pontbriand, he said, "We're not in the business of making things up."

The Vermont State Police investigative report summarizes dozens of interviews with people who knew Fandino and Strock. Almost all the names in the documents are redacted, even those of the two deceased. But Seven Days was able to cross-reference many of the witness statements against each other, as well as with the lawsuit, to glean information about Strock, Fandino and their rocky relationship.

Friends and acquaintances described Strock as a serial adulterer and said a number of his relationships fell apart after partners caught him cheating. That includes Fandino, who moved out of Strock's house in December 2019 after learning he had secretly married a much younger woman while she was in North Carolina visiting her mother.

That woman, who split with Strock months later, described him as emotionally and mentally abusive and said he threatened to kill her if she ever left him.

Fandino and Strock briefly rekindled their relationship at some point in 2020 before Fandino called it off, witnesses told police.

Strock reportedly responded with a campaign of harassment. Witnesses say he left notes and flowers in her locker at Price Chopper, where she worked, and drove by her house in his cruiser to "check up on her," even though she lived outside of his jurisdiction. A fellow officer told investigators that he had heard rumors that Strock was using his cruiser to "stalk" Fandino.

Fandino grew increasingly concerned about Strock's behavior. She confided in a neighbor that she was scared of Strock, and the neighbor tried but failed to convince Fandino to obtain a relief from abuse order against the officer.

Strock's police colleagues started noticing changes in him around this same time. A supervisor, Sgt. Chad Bassette, told investigators that he worried Strock had started drinking heavily in summer 2020. Bassette said he repeatedly offered to help Strock find a therapist; Strock responded that he was already seeing one.

Strock, meanwhile, started confiding in Rhoden, often venting to him during drives in Rhoden's cruiser while the two were on the same shift. That's when Strock reportedly spoke of killing Fandino.

Rhoden said he went to Bassette, the sergeant, a few days later and expressed concern about how Strock was coping with his personal life. But Rhoden told investigators that he never relayed Strock's murder-suicide comment.

"Normal heart broken, heart torn out, destroyed is how I read it," Rhoden said during an October 16, 2020, interview with police, according to a transcript. "I never found him to be suicidal or homicidal at any time."

Rhoden did not remember discussing the matter with Bassette any further. Bassette told investigators that he did not recall Rhoden bringing any concerns to him. Both men declined to comment to Seven Days.

Strock continued to vent to Rhoden after their September conversation but never again mentioned hurting Fandino or himself, Rhoden told investigators.

"I think I scared him into thinking I was going to get him locked up or something," Rhoden said, adding that it seemed like Strock was doing better in the days afterward.

Strock, however, sent Fandino a series of rambling audio messages in late September 2020 in which he repeatedly apologized for his infidelity and asked her to take him back, according to transcripts. Fandino sent numerous text messages around that same time telling Strock that she was moving on.

On the day of the murder, Strock called Rhoden and left a voicemail. "Dave, it's me," Strock said, according to a transcript in the state police report. "Uhm, if you could give me a call if you get this, I'm kind of doing something I shouldn't be doing right now." He arrived at Fandino's house soon after. Ten minutes later, he killed her, then himself.

At a press conference the following day, authorities vowed to conduct a full investigation that would examine whether Strock had exhibited any warning signs.

"I think this is a case that people will talk about and want to analyze for a long time," Washington County State's Attorney Rory Thibault said then.

Two years later, it is unclear whether the case has prompted any change. Thibault recused himself from reviewing the Berlin Police Department's handling of the incident, citing his close working relationship with its members. The Vermont Attorney General's Office quietly declined to pursue charges against any of Strock's colleagues. And the Vermont Criminal Justice Council, which regulates the law enforcement profession and oversees the state's police academy, would not say whether it had received any misconduct complaints about Strock's fellow officers.

The Attorney General's Office did take at least one step. In September 2021, former assistant attorney general Ultan Doyle sent a letter to the Criminal Justice Council. While Rhoden's failure to disclose Strock's comments to a supervisor did not break any laws, Doyle wrote, prosecutors were nonetheless "concerned" by his decision.

"Our office thought it best to bring this issue to the Council's attention for further discussion," Doyle wrote. "Hopefully, direction can be given to officers regarding how to best respond and what resources are available should they ever find themselves in similar circumstances."

It's unclear whether the council followed through on the request. Asked about the letter on Monday, Bill Sorrell, a former Vermont attorney general who chairs the council, said he was unaware of it. And the council's deputy director, Christopher Brickell, could not say whether the letter led to any changes to the academy's curriculum. Brickell did point out, though, that the academy has long offered training on officer wellness.

That's not sufficient for Fandino's family.

"Strock presented an obvious danger to the public," their lawsuit reads. "Witnesses to his instability included fellow police officers." But instead of firing him, taking away his gun or getting him help, the department "chose to do nothing."

"Julie was murdered as a result," the suit says.

The original print version of this article was headlined "Red Flags | A Berlin cop who murdered his ex-girlfriend previously spoke of killing her, colleague says"