Benny Yurco, 'You Are My Dreams' 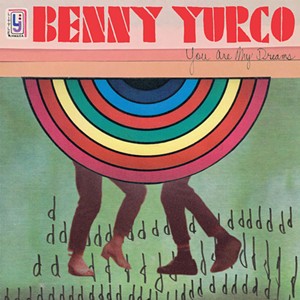 The curse of being a great sideman is forever being best known for your main gig. Then again, there are worse problems to have, especially when your "main gig" is backing up Grace Potter. Benny Yurco, formerly of the Nocturnals and currently a member of Potter's solo band, is a multi-instrumental wizard and an inventive musician. He's also a fearlessly experimental audio engineer. All of these talents come together on his second solo LP, You Are My Dreams.

It's been a whopping eight years since the world was supposed to end in 2012. That was also the year Yurco dropped his first solo project, presciently titled This Is a Future. Both albums are saturated with his love for good old reel-to-reel tape machines. The sound is warm, wild, sometimes gently out of tune and always alive in a way that modern plug-ins can imitate but never truly reproduce.

From the opening riffs of the cool, catchy "Tulsi Time," it's easy to hear why Yurco's so fixated on this vintage tech: It sounds like a transmission from another universe. That timeless groove never skips a beat for the rest of the album. It's a restlessly creative ride, but it all fits together perfectly.

Which is impressive, for a project that mashes dub rock and surf together with ... well, "jazz" is too vague. Specifically, Yurco draws from the bright melodics of bossa nova and the skittering percussion of Afrobeat — and, hot damn, it really works. He has carved out a sound that is distinctive and very much his own.

Not that he did it all himself. Yurco tagged in some longtime collaborators and friends, including North Carolina's Seth Kauffman, another one-man band/mad scientist type who works under the name Floating Action. (He's got an incredible catalog, by the way — very funky and well worth your time.)

Another prominent ingredient is Michael Nau, a prolific and Promethean artist with a long history of melting genre borders. He recorded his outstanding 2018 release Michael Nau & the Mighty Thread in Yurco's Burlington apartment. To play drums and percussion, Yurco also drafted Nau's bandmate Graeme Gibson, who mixed the album in his Los Angeles studio.

That's a lot of pedigree, but it all adds up to an effortlessly organic sound. You Are My Dreams is a nonstop journey with songs washing into each other. Despite the laid-back aesthetic, there's a real urgency to all of these grooves. Well, almost. "Love Me So" is a lazy river of bedroom pop over a slow King Tubby dubscape. And the magnificent "The Beacon" channels old-school doo-wop into a psychedelic ballad that might just be the best song here.

Yet this is not a "best song" kind of album. You Are My Dreams needs to be experienced holistically in one sitting, which I would recommend to anyone reading this. The record is no sideman solo indulgence. Sure, it's whimsical and weird, but it's also an extremely polished, top-quality product that will seduce you and convert you.

You Are My Dreams is available at bennyyurco.bandcamp.com and piaptk.com.