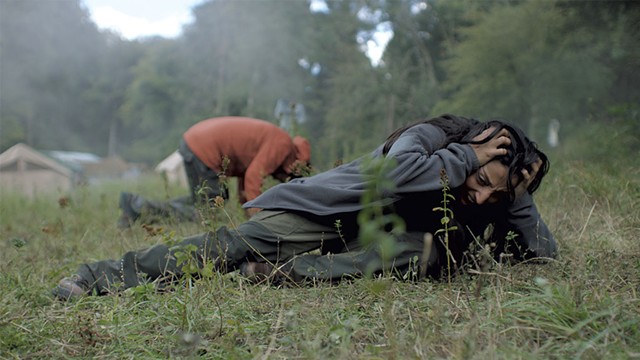 Horror tales often involve powerful forces working underground. Mycorrhizae, or symbiotic relationships between plant roots and fungi, fit the bill. Given that mycorrhizae are non-sentient and benign, however — ecologists tout their soil-enhancing properties — they make an unlikely star for a horror movie. That didn't stop Ben Wheatley, who wrote and directed this trippy oddity from the UK that premiered at the 2021 Sundance Film Festival and is now streaming on Hulu.

On their long hike, the pair encounters both natural obstacles and hostile humans. After unknown assailants steal their shoes, Martin wounds his foot badly on the forest floor. A woodland dweller named Zach (Reece Shearsmith) offers to help. Martin and Alma follow the affable fellow into his dwelling, a tent complex that resembles an art installation. They soon regret it.

Director Wheatley is something of a part-time auteur. A fan of his dark, absurdist dramas Kill List and Sightseers, I was discouraged when his remake of Rebecca for Netflix was a swoony romance with nothing wicked or weird about it. His next big project is the sequel to the killer-shark blockbuster The Meg.

But somehow, in between making those two highly commercial movies, Wheatley directed In the Earth, which seems designed to be the very essence of WTF cinema.

The film shows the influence of several genres and generations of cult horror. Shot in just 15 days, In the Earth has the grubby, low-budget feel of '70s horror movies such as The Texas Chain Saw Massacre. Though it's not a found-footage film, the sylvan setting inevitably recalls The Blair Witch Project, especially combined with the key role played by the fable of a woodland spirit. There are strong hints of eco horror. And Dr. Wendle, when we finally meet her, embodies the mad scientist archetype beautifully, thanks to Squires' electric performance.

Wheatley subverts some of these familiar motifs in clever ways. The main characters represent a reversal of traditional horror's gender roles, for instance: Alma is stoic and physically competent, while Martin is continually groaning, moaning and hurting himself.

Zach occupies the place of the scary local who looms large in every variation on the "cabin in the woods" story. Far from a hick, however, he's an educated transplant to the forest who expounds self-importantly on the virtues of herbs and the pleasures of darkroom photography. He also has a knack for disturbing deadpan humor, assuring one victim that a blow won't hurt because "My ax is very sharp."

When the movie isn't busy walking the line between gross horror and absurdist comedy, it hints at big, vague ideas. Dr. Wendle attempts to use light and sound to communicate with the forest's mycorrhizal network, which she believes may be sentient. Martin's festering wound evokes primal fears about contamination of the human by the inhuman. And the pandemic setting — no disease is ever named — makes human civilization seem inherently precarious. Maybe we've had our day, and it's time for those resourceful plants to take over.

The problem with In the Earth is that Wheatley never commits to any one of these ideas. Fans of body horror will wait in vain for a horrific union of man and mushroom, while enthusiasts of more subtle psychological scares will lament the characters' lack of interiority. For all the actors' skill, they feel like players in an improv sketch — vivid but shallow.

Powered by Clint Mansell's throbbing electronic score and Wheatley's strobing visuals — photosensitive folks, beware! — In the Earth is undeniably a trip. But it's a trip that only takes us on a tour of references to better movies.

Kill List (2011; AMC+, IFC Films Unlimited, Shudder, rentable): Wheatley got a jump on the recent folk horror revival with this cult flick that starts like a crime thriller and gradually becomes something much weirder.

"Hannibal," Season 1, Episode 2 (2013; Hulu, rentable): If you are a body horror fan who wants to see man become mushroom (I'm sure there are a few of you!), watch this episode of Bryan Fuller's cult horror series. You'll never see composting the same way again.