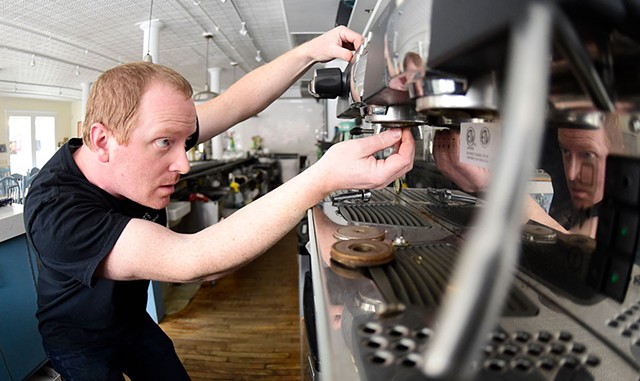 On a sunny, snowy day in February, Ben Colley, owner of Java Joe's Coffee + Espresso Equipment Service in Waterbury, is tucked in a back room at the Colchester Costco Wholesale, digging stuck beans and stale grounds out of a Bunn grinder. He tests to make sure the machine is properly calibrated, making small adjustments.

Moments after Colley returns the contraption to its spot near the store's exit, an elderly man in jeans and a gray tweed cap dumps a five-pound bag of beans into the hopper and pushes a button. The burrs whir, and the spigot spits out a mountain of grounds — enough to make about 100 cups of very strong coffee, or 127 double shots of espresso. Just a few minutes after being repaired, the machine is on its way to needing its next service call.

When Colley, 39, was growing up in Pennsylvania, and later, when he studied religion and music at the University of Vermont, he never imagined he'd end up repairing coffee equipment. "I didn't know this job existed," he says. "You walk into a commercial kitchen and see how many machines there are ... They all need maintenance at some point."

Indeed, nearly every restaurant, café, hotel and gas station has grinding and brewing equipment that will inevitably need repairs, and that makes people like Colley the unsung heroes of our caffeine buzzes. Without their fix-its, it would be hard to get a reliable fix.

Because there are few people in his line of work, Colley is willing to drive three hours each way — as far as upstate New York and New Hampshire — to ply his trade. He sells and installs new and used equipment and repairs and recalibrates existing machines.

His regular clients include Starbucks, Costco and plenty of small local coffee shops such as Speeder & Earl's Coffee. For people who have espresso machines in their kitchens, Colley makes home visits, too.

On his way back from the Costco job, Colley decides to swing down the road to Scout & Co. in Winooski for a latte, his second of the day.

"I'm a two-to-three-cup-a-day guy," he says. "I definitely make a latte first thing in the morning. Depending on where I go, I'll usually have a couple more."

His home espresso maker, Colley says, is a $600 Rancilio from Italy. These days, he often buys his beans from Burlington's Brio Coffeeworks. "I think they do a really good job," he notes. "Their [coffees] have a lot of interesting flavor profiles. They really focus on the details."

As he strolls into Scout, Colley catches co-owner Tom Green's eye; within minutes, he's behind the counter for a little unscheduled work. When Green delivers Colley's latte in a large white mug, it's got a couple extra foam hearts on top. Colley also scores a bag of beans from Vivid Coffee Roasters, which shares Scout's space.

How did Colley, who spent five years baking the rounds at Burlington Bagel Bakery, come to work on espresso machines? In 2009, his father-in-law, Joe Danaher, who had been laid off by IBM after 25 years, got training in coffee equipment repair from an out-of-state cousin in the biz. Danaher started Java Joe's, where Colley helped out part time, then full time.

"I love helping clients dial in that perfect shot." Ben Colley tweet this

"I tried this and realized I really enjoy fixing things and understanding how they work," Colley says. "I was definitely a coffee drinker [already], but once I started working on the equipment, it perked my interest even more." This January, Danaher retired, and Colley became Java Joe's sole owner.

Some of Colley's work is scheduled, but generally he's responding to reactive calls after something goes awry. A steam wand might break down and stop getting milk hot and foamy. Leaks might be caused by a host of finicky things. Surprise problems make for urgent repair needs: "When customers can't have their cappuccinos," they get disappointed, he points out.

Although he services all kinds of equipment, Colley prefers to work on espresso machines. "They fascinate me," he says. The various brands of equipment are designed to do the same task — force steam through coffee grounds — yet they do so in an array of ways. "It's interesting seeing all of the variations between the brands," he says. "I like understanding the different things that can go wrong."

And Colley likes to help people make things go right. "Making espresso is an art and a science at the same time," he suggests. "I love helping clients dial in that perfect shot." In addition to repairing, Java Joe's consults with new businesses, guiding them through the process of choosing equipment, installing it and using it to its full potential. "That's becoming more of a focus," Colley says.

Sometimes he even makes people's coffee for them. In 2017, Ben and his wife, Becky Colley, started a pop-up coffee shop called Petit Noir. Based in Waterbury, the biz, which brews beans from Chicago's Intelligentsia as well as Brio, shows up at local events with espresso, coffee pour-overs, caffeinated and decaf teas, and baked goods. It's just another way for the Colley family to put their coffee expertise to work.

Colley's got a hand in many aspects of Vermont's coffee industry, but not all of them. Although his office is in Waterbury, home of Keurig Green Mountain — which is planning a merger with the Dr Pepper Snapple Group — he seldom works on Keurig machines, which are owned by an estimated 20 percent of American households.

It's not that he's snobby about Keurigs — he used to own one — just that it's often not worth the trouble. "They only cost around $100 ... I'm not sure if they want you to try to fix them," Colley says. Unlike espresso makers, with their steampunk metal bits, Keurigs are mostly made of plastic, he explains. For the cost of parts and a service call, for which Colley charges $75 an hour, a client could purchase a new machine.

When he was a liberal arts student at UVM, digging into the ways our brains process religion and faith, Colley never imagined he would end up in a trade. But he likes his "hands-on job."

"I am doing something completely different," he acknowledges. "Looking back, maybe I should have been in the sciences, but no regrets. They say a liberal education teaches you how to think."

And, of course, there are few things quite as conducive to deep thinking as a good coffee buzz.