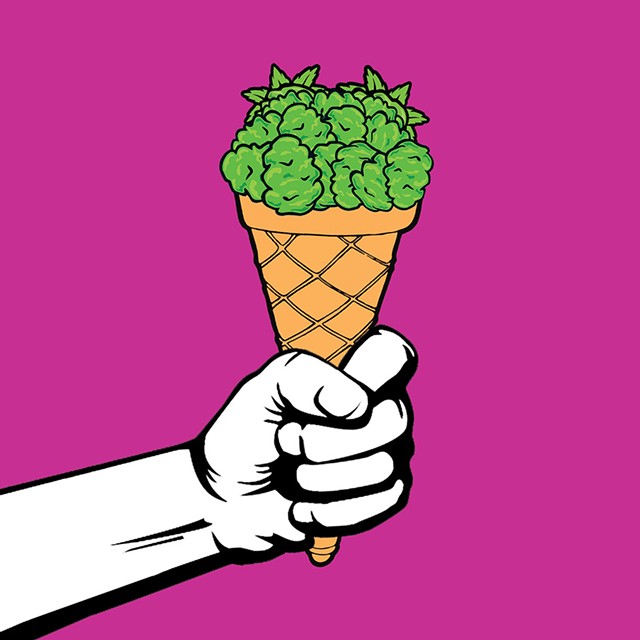 By July, Ben Cohen will launch a cannabis business in Colorado. If it were a pot-infused ice cream company, the cofounder of Ben & Jerry's could call it Stoned Cold. But Cohen's venture will produce low-THC, high-terpene pre-rolled joints. In an interview with Seven Days, he wouldn't reveal its name — despite the pun potential.

The Vermont entrepreneur did, however, talk about other aspects of his plan. The company's profits will help fund cannabis businesses owned by people of color and nonprofits that work for criminal justice reform, Cohen said.

"Its purpose, aside from selling great pot, is to right the wrongs of the war on drugs," Cohen said of the business. "You have the situation where there's all these poor Black people in jail for something that now's legal, and all these rich white people making gobs of money off it."

In April 2020, the American Civil Liberties Union published a paper called "A Tale of Two Countries: Racially Targeted Arrests in the Era of Marijuana Reform." It reported that Black people are nearly four times more likely than white people to be arrested for marijuana possession, despite similar rates of use.

"This report should be the final nail in the coffin for the inane War on Marijuana," the report reads, "and sound yet another abolition knell for this country's 45-year drug prohibition charade."

The racial disparity applies in all 50 states and is significantly larger in Vermont than the national average: Black people in the state are about six times more likely to be arrested for pot possession than white people, according to the ACLU report.

"What many states are doing, and I hope Vermont will do as part of their law, is decarcerate people who are still in jail for nonviolent marijuana offenses," Cohen, 70, said. "And expunge the criminal records of people who got arrested for it."

Vermont has done better in recent years at expunging records. Vermont Legal Aid and state's attorneys' offices have held clinics to help clients wipe out old low-level offenses, including marijuana convictions. But demographic data on expungements, including racial data, are not available because expungement is, by definition, the erasure of a record.

Meanwhile, Cohen thinks licensing and capital should be accessible and available to Black-owned cannabis businesses. That mission drives his new company.

"What our company is planning on doing with our profits is to use about 80 percent of them as grants to people of color to expand or grow their pot businesses," Cohen said. The remaining 20 percent will be donated to two nonprofits, the Colorado Criminal Justice Reform Coalition and the Last Prisoner Project.

"Its purpose, aside from selling great pot, is to right the wrongs of the war on drugs." Ben Cohen tweet this

The latter organization was founded in 2019 on the premise that people profiting and building wealth from the legal cannabis industry should work to "release [from prison] and rebuild the lives of those who have suffered from cannabis criminalization," said Mary Bailey, the organization's managing director. The nonprofit's name refers to the roughly 40,000 people imprisoned for pot convictions.

Bailey told Seven Days that the Last Prisoner Project's executive team has been working with Cohen to "walk him through our organization" in advance of his company's launch.

"It's really inspiring when people who have a platform want to come to the table and make a positive impact," Bailey said.

In Vermont and around the country, the issue of social equity and cannabis legalization "is by far the No. 1 concern that has developed in every single legal jurisdiction," said Tim Fair, a Burlington attorney who specializes in cannabis law.

"For the last 40 years, the war on drugs has caused destruction to countless people," Fair said. "The brunt of that harm was suffered predominantly and disproportionately by minority communities."

A bill in the Vermont legislature, S.25, would direct the five medical marijuana dispensaries that are eligible to receive the first retail licenses to donate 3 percent of their gross sales to a cannabis community business development fund that the state would seed with $500,000. The fund would provide grants and loans to "social equity" applicants for cannabis businesses, and the requirement would be in place for the five months that the inaugural licensees will operate before other businesses can join the market in October 2022. (See "Budding Heads" for more on S.25.)

Fair's firm recommends that its clients in the industry sign a pledge to donate 1 percent of gross sales to a community fund for social equity for three years.

"What we've been trying to do is come up with solutions to help the social equity problem, separate from the legislature," Fair said.

For his new business, Cohen will buy pot in bulk from Colorado growers who use organic practices. (The crop can't receive U.S. Department of Agriculture organic certification because cannabis remains illegal at the federal level.) He expects that the low-THC joints will eventually be available in 200 retail outlets in Colorado.

"It's low THC because today's pot is so strong that you take two tokes and you're stoned on your ass," Cohen wrote in a text message. "The idea is to prolong your smoking pleasure and dose more accurately."

Cohen envisions his business model expanding and being replicated elsewhere. "If the business is successful in Colorado, we would grow it by licensing the brand to Black entrepreneurs in other states," he said — including Vermont.

As legalization is established, Cohen hopes to see the Vermont cannabis industry take shape "in the spirit of family farming."

"It's pretty unusual that a new industry is born," he said. "And I think we can take this opportunity to kind of solidify some Vermont values."